“The Lady in Gold: The Extraordinary Tale of Gustav Klimt’s Masterpiece, ‘Portrait of Adele Bloch-Bauer’” describes the history of Klimt's work. 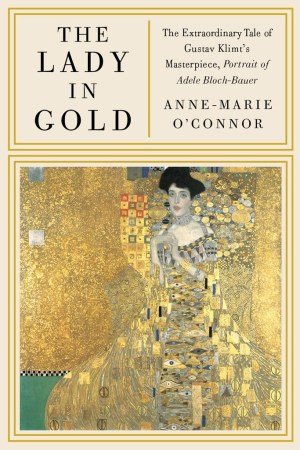 Gustav Klimt’s “Portrait of Adele Bloch-Bauer,” his elegant, iconic 1907 painting of a Viennese woman, is the centerpiece of Ronald Lauder’s Neue Galerie in New York. With its intricate gold motifs, inspired by Byzantine mosaics the artist saw in Ravenna, it glows from the walls. But the painting’s history is a complex one, involving war, theft and legal battles, which Washington Post writer Anne-Marie O’Connor has now described in her new book, “The Lady in Gold: The Extraordinary Tale of Gustav Klimt’s Masterpiece, ‘Portrait of Adele Bloch-Bauer’” (Alfred A. Knopf).

The painting was originally commissioned by Ferdinand Bloch, a sugar baron; he and his wife were part of a sophisticated group of wealthy Viennese Jews whose interests fueled a remarkably vibrant art scene. Bloch was deeply in love with his much-younger wife, and she greatly enjoyed posing for the controversial Klimt. Klimt’s 1901 painting “Judith” also looks a lot like Adele, and there were rumors at the time that the two were lovers. O’Connor vividly evokes the hothouse realm of pre-war Vienna with its salon culture and mix of intellectual and aesthetic currents.

Klimt had been born in poverty in 1862, the son of a gold engraver, but he got a scholarship to the Vienna School of Arts and Crafts and soon began working on municipal projects. Before long, he was getting commissions of his own. Klimt’s longtime partner was Emilie Floge, who had a successful business designing colorful, flowing dresses influenced by Japanese textiles and folk costumes, rational dress that was worn without corsets. Her clients and his often overlapped.

Adele became a saloniste who was outspoken about her atheism and her socialist views. She died suddenly in 1925 of meningitis, only two years after she had written a note to her husband asking that their Klimt paintings, including her two portraits, be left to the Austrian National Museum. Shortly after the Anschluss in 1938, the Nazis began systematically confiscating the property of Jews, including businesses, houses and art collections. (They had — and kept — meticulous lists.) The Bloch-Bauers’ mansion on the Ringstrasse was turned into the headquarters of the Austrian national railroad, and Reinhard Heydrich, aka the Butcher of Prague, later moved into the family’s estate in Czechoslovakia.

“It was greed and avarice,” O’Connor says of the Nazis’ behavior. “They wanted to shake down these families, and it was more convenient to do this if they demonized them. There were cycles of pogroms [in Europe] — there was a cultural tradition of this, but it had not reached these proportions.” The writer, who now lives in Mexico City, where her husband, William Booth, is the Washington Post’s bureau chief, went to Vassar College, the San Francisco Art Institute and Berkeley and worked earlier at Reuters and the L.A. Times. She became interested in the story of the painting after reading a short piece about the quest of Maria Altmann, one of the Bloch-Bauer heirs, and wrote a number of articles about the case.

After the Anschluss, many in the Bloch-Bauers’ circle began talking about leaving the country. But it had become difficult. This gave rise to one of the few rather amusing developments in this period, what O’Connor calls “gay marriage,” which means Jewish women marrying Aryan gay men from other countries in order to escape. Bloch had fled to Czechoslovakia, then Switzerland, where he died just after the war.

Although the Nazis disliked what they called “degenerate art,” a group of artists they considered to include the German Expressionists, among them Oskar Kokoschka, they didn’t place his friend Klimt in this category. In fact, the largest Klimt exhibition in history, organized by Baldur von Schirach, the Nazi governor of Vienna, took place in 1943. “He accepted Klimt as an ubermensch,” O’Connor says. “Klimt was a hero, a handsome, well-built genius and also an excellent draftsman.” She notes that most of the paintings in the show were stolen from Jewish collections.

The portrait the Nazis called “The Lady in Gold” — to disguise the fact that it depicted a Jewish woman — survived the war, hidden in a former monastery at Gaming, and, after the conflict ended, went to Vienna’s Belvedere Palace museum. In February 1998, Hubertus Czernin, the first journalist to get access to previously closed Nazi archives on art, published an article in the Austrian news magazine Profil that alleged that, as O’Connor writes, “Austria had knowingly stolen vast art collections from the Rothschilds, the Lederers and other Jewish families.”

Austria was able to do this, as detailed in O’Connor’s book, because government officials adopted the attitude that the state of Austria was “Hitler’s first victim.” In the art world, many officials who had been in charge during the Nazi period were still in command. Much of the stolen artwork had been returned to governments, not individuals. Of approximately 35,000 businesses that had been confiscated from Austrian Jews, O’Connor writes, only a few thousand were ever returned to them. “A cloud of secrecy settled over Vienna, the city on the Danube once known for its love of beauty and pleasure,” she writes.

“They regarded [the paintings] as symbols of their country,” O’Connor says of the Austrian officials and the Klimt portraits. “They were strongly attached to them. They didn’t understand who these women were and how they fit into Klimt’s world.

“I was very intrigued by what turned out to be the truth behind women who wanted to live life differently, wanted to be more,” O’Connor adds. “Society wanted them to be less. Many of Klimt’s models were a little bit of enigmas. Turn-of-the-century Vienna in many ways was like the Sixties.”

In 1998, Altmann, Adele’s 82-year-old niece who owned a dress shop in Beverly Hills, called Randol Schoenberg, a young Los Angeles lawyer who was the grandson — and spitting image of — the celebrated atonal composer Arnold Schoenberg, who had fled the Nazis in 1933. Altmann had heard about legislation pending in Austria concerning art stolen by the Nazis, which soon passed. The new law said it had been unethical for officials to hold onto important artworks by claiming that they were part of a national patrimony in exchange for allowing less significant ones to leave the country, a common practice after World War II. Schoenberg had been reading about this, too, and agreed to take on the case to recover the Klimts owned by Bloch. Maria was joined as a plaintiff by her niece Nelly Auersperg, a noted doctor in Canada, and three other family members.

It was a lawsuit that few ever thought would succeed, but Maria, a cultured, utterly charming woman who spoke the German of another age, made an excellent plaintiff. She remembered being awed by her Aunt Adele. O’Connor writes that she said, “‘I was a timid little girl next to her. She seemed arrogant and not interested in a child…All Adele cared about was knowledge, learning, improving your mind.’”

In 1999, the Vienna Advisory Council on art restitution said that 241 pieces of art should be returned to the Rothschild heirs. As for the Bloch-Bauer heirs, after years of legal maneuvering, and winning in lower courts, they took their case to the U.S. Supreme Court, where they eventually won, then went to arbitration in Austria itself, which mandated that the five Klimts be returned. In 2006, Lauder bought “Adele Bloch-Bauer I” for $135 million, then the largest amount of money ever paid for a painting. The remaining four paintings were sold at auction for $192.7 million. They went into private collections, and their owners have not been made public.

One of the particularly memorable aspects of the book is its evocation of a beautiful, vanished world. “To give you an idea of the time, when Freud did a book, it took weeks to get a review, and he got a dismissive one,” O’Connor says. “But in a salon, his ideas could get full interest and attention; it was a much more open forum. Salons were Twitter in those days.”