Halston, described as an “absolute creative genius” by the man who portrays him, Ewan McGregor, gets the Netflix treatment in a new series 20 years in the making. To document the designer's legendary rise and fall, costume designer Jeriana San Juan recreated his signature style and many of his iconic pieces.

“A very American story — a very classic rise and fall.”

So describes director Daniel Minahan of Roy Halston Frowick, a larger-than-life, self-made man who helped put American fashion on the map — only to lose it all, name included. Beloved by Liza Minnelli and Elsa Peretti, a fixture of Studio 54, and in-demand dresser of Manhattan’s uptown crowd, Halston has gone on to hold allure in pop culture long past his death in 1990, captured now in a new Netflix series from Minahan simply titled “Halston” and starring Ewan McGregor in the titular role with Rebecca Dayan as Peretti and Krysta Rodriguez as Minnelli.

At the center of a show about fashion — particularly one about a designer himself — is the costumes, and “Halston” is designed by Jeriana San Juan, who previously worked on “The Plot Against America” and “The Get Down.” San Juan not only worked as a costume designer, making many of McGregor’s clothes from scratch and sourcing several archival pieces for Dayan as well as recreating iconic Halston pieces, but also served as a consultant to McGregor on how to behave like a fashion designer.

“The show lives and dies by the costumes and the clothing,” Minahan says. The series is arranged in such a way that each episode focuses on a different collection: the collection that went to Versailles for the famed, WWD-dubbed “Battle of Versailles,” the fragrance launch, the J.C. Penney collection and so on.

“Jeriana and I had to be really smart about what we wanted to show because we were telling the story of his evolution through the costumes, and the thing that was tricky about it was Halston’s clothes are so timeless,” Minahan says. “They’re so beautifully proportional and so iconoclastic that they look contemporary. So to make them appear forward, we had to create a contract between what the outside world looked like, which was uptown ladies in boucle Chanel suits and punk rock kids, and this very refined silhouette and idea of what was happening inside Halston’s world, inside of his salon.”

McGregor, calling in from Los Angeles where he is shooting the Disney+ series “Obi-Wan Kenobi,” says he didn’t know much about the designer prior to taking on the role. Especially helpful in his research was an interview Halston did on “The Phil Donahue Show” in Chicago, as well as footage of him backstage at his fashion shows.

“His passion, his absolute creative genius, and his inability to compromise his beauty and his design,” McGregor says of what drew him to the part. “I thought it was wonderful to play somebody who was such an incredible talent.”

The series started shooting in January 2020 and had to shut down when the pandemic began, picking back up through the fall.

“At the end of such a long project and playing such an interesting man, it was sad to let him go,” McGregor says. “We wrapped just before Christmas in New York, and then I had one scene to play here in L.A., in January, and I was glad to have one little scene left over so I didn’t have to say goodbye to him all at once.” 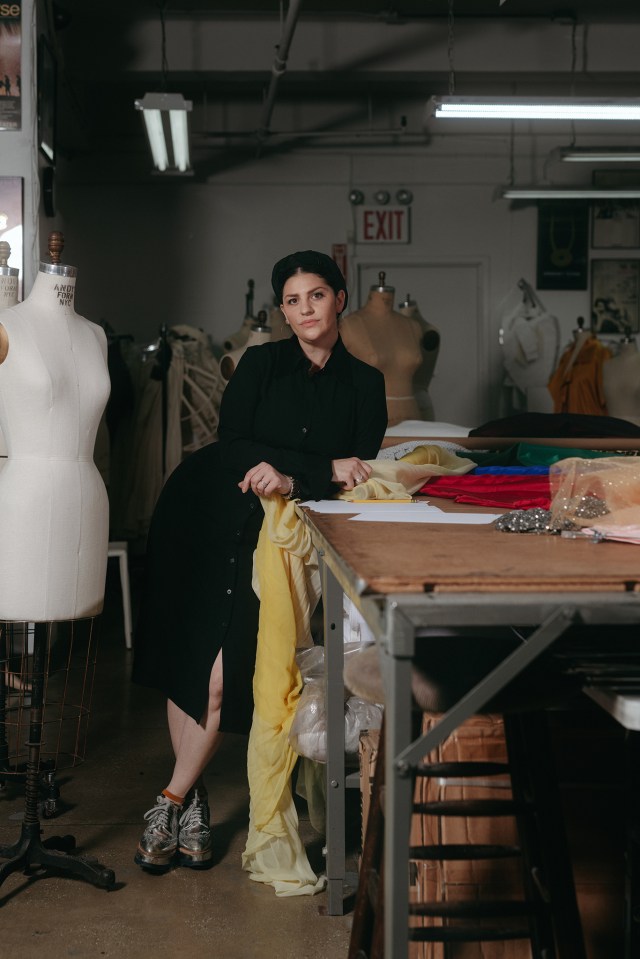 McGregor approached his role as the designer diligently, San Juan says, asking to borrow a sewing machine so he could practice in his own time.

“He really took right to it. He was a wonderful student. He made a pair of pants in his free time,” she says. “I think he said he donated them, but they were actually quite lovely — very Japanese.”

San Juan consulted with McGregor throughout the filming, showing him how to pull fabric on the grain, hold scissors, etc.

“I worked with him in my studio and he worked with my tailor and had sessions on dressmaking 101. How to sew and how to drape on a mannequin and how to work with a fit model,” she says. “I also would work with him as I was fitting him sometimes, what my eye was going to and why.”

San Juan, who grew up between Miami and New York and is a first-generation Cuban American, was always a fan of Halston and his very American story.

“This very famous name that belongs to this person you’ve never heard of. Someone who had really created himself from thin air. He invented modern American fashion,” she says.

She used the WWD archives heavily in her research process, studying his reviews, images of his collections and also familiarizing herself with his peers of the time. For McGregor, she wound up making most of the clothes custom — everything down to Halston’s signature black turtleneck.

“People think of it as such a simple uniform — a black turtleneck and black pants, and meanwhile it’s really much more nuanced from that,” she explains. “There is a specificity to that, to really elevate that and make it Halston. And then all the layering elements — he was very smart about how he styled himself. He was very delicate and careful in how he dressed.”

For Elsa Peretti, played by Rebecca Dayan, she used many real samples from Halston archives, supplementing both Peretti’s and Minnelli’s wardrobes with recreations of Halston originals.

“It was such a joy for me to bring some of his iconic pieces to life on our Elsa or our Liza, because they truly did dress exclusively in Halston,” San Juan says. “It gave me this opportunity to show some of his pieces not on the runway but living and breathing in real life.” 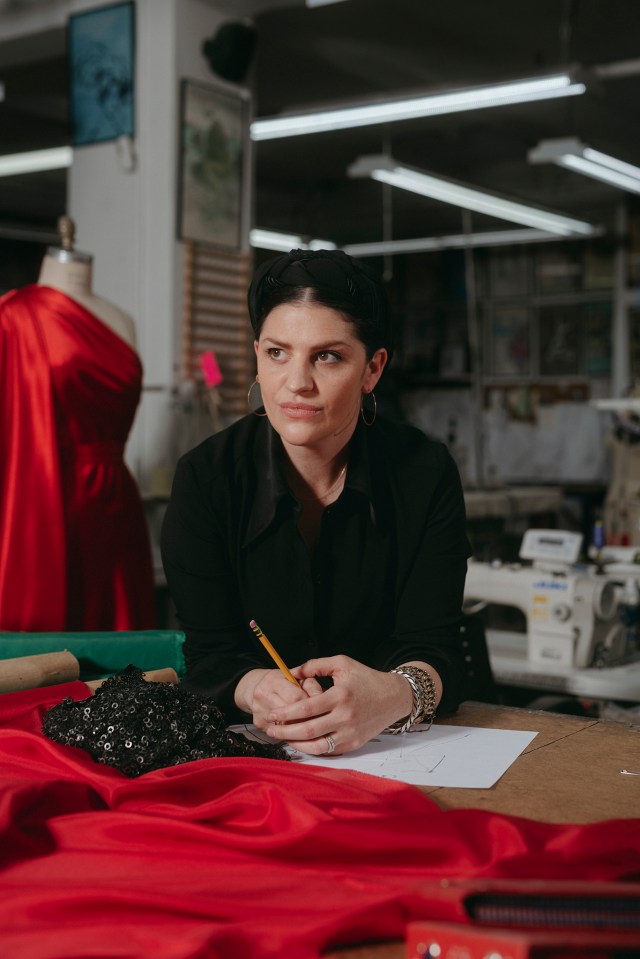 “I remember getting really excited the first time I got fit for the ‘I Gotcha’ dress,” Rodriguez says. “In the fitting I took a picture of myself and it was not even finished, it was pinned and they were making alterations on it, but it immediately put me in the excited territory of getting to inhabit this person I’ve been admiring my entire life.

“What’s interesting to note is that Halston really was American fashion,” Rodriguez adds. “I think how he did that was tapping into an American individualism that women were not experiencing at the time. They were coming from an era of having to look a certain way of the foundation garments and the girdle and bras and panty hose, and molding a woman, and he hit at a time when it was time to celebrate a woman. He really ushered in that era of women choosing their clothes that had utility about them, but the utility was dancing and hitting the town and also going to work and being glamorous at every moment. There was no other era when your clothes could function in that way.”

Earlier this week, the Halston family expressed their displeasure with the series, news which naturally disappointed McGregor.

“I was sad to hear that they were upset about it because I think we’ve made the series with such care, and over the 20 years that Dan’s been trying to get it together he’s spoken to people in the family, and Halston’s brother, and we met many people who knew Halston,” McGregor says. “So I was sad to hear that.” 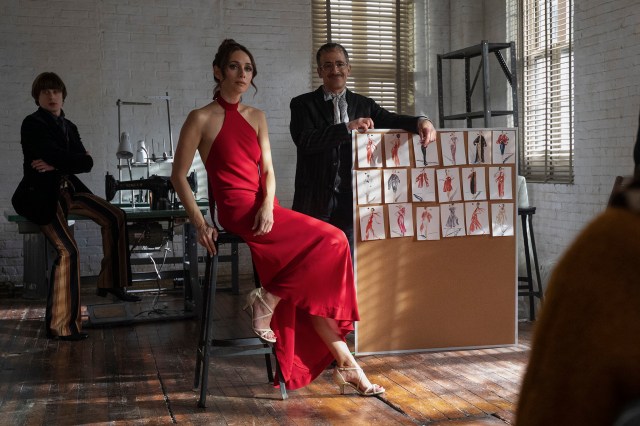 Nonetheless, the cast is hopeful it will strike a different note with audiences, particularly when a touch of glamour and New York City nightlife seem rather distant memories.

“The idea that he created this little family of creatives around him, this ever growing, very inclusive group of creative people, I think that’s really exciting — especially now, as people are kind of coming out of their bunkers and engaging with the world again,” Minahan says. “This is a love letter to New York in that time and the creative zeitgeist that went on in this time when New York was at an all-time low.”