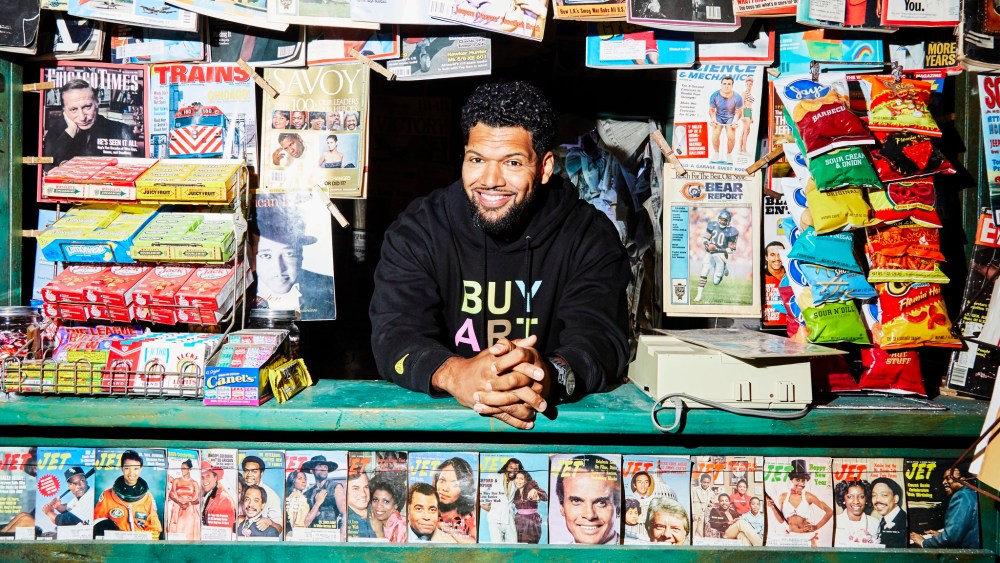 The fictional world of Hebru Brantley’s famed characters FlyBoy and Lil Mama will come to life for the first time when Nevermore Park opens on Oct. 24 in Chicago’s Pilsen neighborhood.

“With these characters I’ve been using in this high art space, it’s giving them an origin, where they’ve spawned from, the things they’ve seen,” says Brantley, whose collectors include Beyoncé and Jay-Z, Alicia Keys and Swizz Beatz and athletes like Dwyane Wade and Kevin Durant. “There’s a lot of revisionist history based on certain things that are part of the zeitgeist and certain things that are part of popular culture.”

Spanning 6,000 square feet of indoor space, the installation begins with a gallery of Brantley’s paintings and sculpture, commissioned for the installation, and moves into a series of interactive rooms, experiences and displays.

“It’s very contemporary, it’s an extension of the work I have been doing. It’s a bit of ‘Alice in Wonderland,’” says Brantley, on a call from Los Angeles, where he divides his time with Chicago.

“You enter it through a gallery, the furthest end of the gallery, there’s one painting that’s just decimated and it looks like someone charged through the painting. It’s like Alice falling down the rabbit hole into wonderland, you come out through the newsstand, out through the front of it and then you’re in the world.”

Brantley’s studio and the production firm Iron Bloom designed the installation, which explores the backstory of the pilot-goggle wearing kid FlyBoy, whose character was inspired by Tuskegee Airmen in World War II, and Lil Mama. It also introduces new characters into the story.

“The basis for this story, it’s based on lineage and sort of presupposing,” Brantley says. “I’m embellishing a more fantastical tale to talk about one in particular who became the one of legend and years and years later we have the new FlyBoy, which is our current FlyBoy, Skylar.”

One theme the installation focuses on is the idea of “empowerment over power,” Brantley says.

“It’s sort of subscribing to this idea that you don’t need to be this Marvel, trophy superhero to effect change and to bring about this power change,” Brantley says.

“Instead of a very static art show, instead of ‘art is art,’ where you can look and not touch, we want you to touch everything except for the paintings,” the artist says. “The gallery we are still treating it as such, but if you get past that point we want you to feel free to engage.”

The immersive settings and experiences include a re-created newsstand, with iconic newspaper headlines plastering the walls like “Moon Walk Completed” and the announcement of Obama’s presidency; a pretend crashed rocket, where visitors can imagine what it feels like to fly a rocket; a tinker shop, which mimics a mechanic’s car garage with old TVs and radios, and a fabricated historic Pullman car, replete with leather Chesterfield chairs and a vintage Victrola stereo.

Visitors can walk into a room-sized sculpture of Lil Mama’s head, where Aaliyah’s “One in a Million” song is on constant play. “Gail’s Garden” is a room featuring a glowing garden with flowers dusted in shades of purple.

Brantley says the cloud room, which is filled with high-density fog to mimic what it might feel like to walk through clouds, is the height of the journey.

“It can feel climactic. It’s fun,” Brantley says. “Not to sound cliché, it’s the idea of freedom of emancipation, of finally getting to that final stage where you are master of your domain and mastering flight. There’s a power in that and sort of responsibility just trying to convey all that to make you feel like you are in this cloud. Aside from having an anti-gravity chamber, for now, I think we did a pretty good job.”

It was important to Brantley, who’s also currently working on the script for his first feature film with Lionsgate, titled “Kankakee,” named after a city in Illinois, that Nevermore Park take place in Chicago — where he grew up.

“As a kid, I grew up looking left and right, to New York and Los Angeles as a compass for the future. There are so many creative and brilliant people in Chicago and they shouldn’t have to leave to get to the next level. It’s important to cultivate that creative energy in Chicago on the South Side, on the West Side, on the North Side,” he says.

Nevermore Park is located at 949 W. 16th Street in Chicago, and is open through Dec. 1.