The designer will be honored at a gala prior to the opening of the Martin Luther King, Jr. Memorial this weekend — and he's outfitting the crowd with gear. 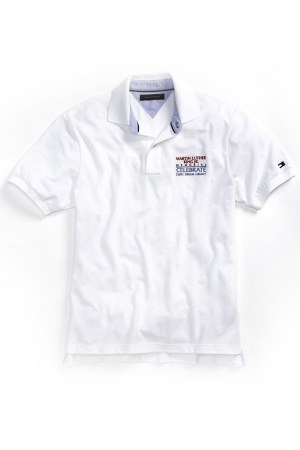 Capping off a flurry of events, the Martin Luther King, Jr. Memorial will be unveiled Sunday on the National Mall in Washington, D.C., in a dedication co-chaired by The Tommy Hilfiger Corporate Foundation and chaired by General Motors Co.

This story first appeared in the August 23, 2011 issue of WWD. Subscribe Today.

The Hilfiger Foundation has been a key sponsor of the project for more than 10 years with fund-raising, donations and executive involvement. The company has donated $6.25 million, and raised an additional $2 million for the MLK Memorial, which is located near the Jefferson and Washington Memorials.

On Sunday, the 48th anniversary of the March on Washington, D.C., and Martin Luther King’s historic “I Have a Dream” speech, the dedication will occur in West Potomac Park with celebrity co-chairs Stevie Wonder, Aretha Franklin, George Lucas and Jamie Foxx, among others. The dedication ceremony will begin at 11 a.m., when President Barack Obama will deliver his remarks about the memorial, followed by a post-dedication concert at 2 p.m. with a special to-be-announced musical performance. Hilfiger will be among the people addressing the audience during the program.

Prior to the dedication ceremony and concert, Hilfiger, which is wholly owned by PVH Corp., will donate more than 100,000 custom baseball caps featuring artwork inspired by the memorial logo to the audience. Hilfiger will also dress more than 1,500 event volunteers in custom polos displaying the Memorial logo.

“I am deeply honored to be a part of this momentous occasion,” said Tommy Hilfiger. “To see the memorial built and celebrated is a remarkable milestone for all those who continue to advocate Dr. King’s universal message of humanity and equality. Our company has had the exceptional opportunity to work with the Martin Luther King, Jr. National Monument Project Foundation for over 10 years; it is a privilege and a responsibility that we take great pride in.”

Guy Vickers, president of The Tommy Hilfiger Corporate Foundation and vice chairman of the Martin Luther King, Jr. National Monument Project Foundation Board, added, “It is inspiring to know that this memorial will serve as a significant remembrance of Dr. King’s legacy for future generations. The Martin Luther King, Jr. Memorial celebrates a heroic person who dedicated his life to building a better society for all people, and represents a historic achievement for equal rights worldwide. The Tommy Hilfiger Corporate Foundation is proud to uphold this profound message.”

Fifteen years in the making, the memorial celebrates King’s legacy as one of the world’s most important humanitarians. The memorial will convey four fundamental and recurring themes throughout King’s life: democracy, justice, hope and love. A 450-foot inscription wall will feature more than a dozen King quotes reflecting his humanitarian vision. The memorial will include the “Mountain of Despair” and the “Stone of Hope,” a 30-foot sculpture of King. The semicircular geometry of the memorial, within the triangular configuration of the site, incorporates the Tidal Basin and frames views to the water.