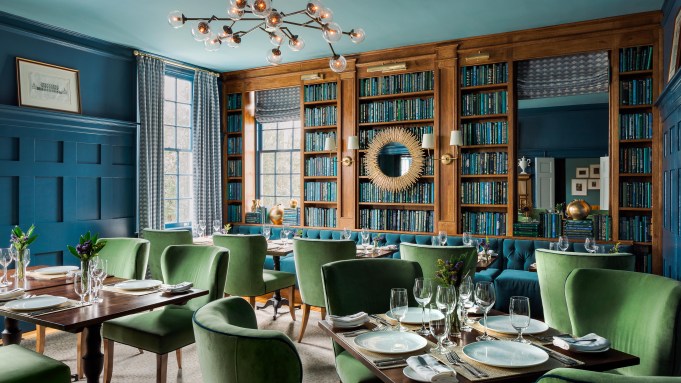 Over the past two centuries, The Clifton has welcomed an impressive cast through its doors — starting with its original owners.

The Charlottesville, Va., estate was originally built for Thomas Jefferson’s daughter Martha, and her husband, in 1799. This year, under new ownership, the property has unveiled a complete redesign with hopes of stretching the property’s legacy for years to come.

Coowner Charles D’Angelo already had his eye on the impressive but struggling property when it was put up for sale last year. Along with his brother, the pair purchased The Clifton in December and began a renovation. “We’re not necessarily hotel people,” says D’Angelo. “The first time I saw the property — it’s just stunning. It’s 100 acres of idyllic Virginia countryside with views of the Blue Ridge Mountains, there’s a 19-acre lake on the property, and the history — built in 1799, was Thomas Jefferson’s daughter’s home — it was almost like a fantasy,” he continues “But it was also tired — it hadn’t really been done up since the mid Eighties — so it was clearly in need of some love and thoughtfulness. And that was also attractive to me; to really bring a modern take on a historical property.”

They enlisted the help of Blackberry Farm Design, who took an eclectic approach to the historical property by mixing contemporary and classic design. The firm crafted a unique look for each of the 20 rooms, with a focus on jewel tones and plush materials.

“It doesn’t look new, but it doesn’t look old — it looks modern, it looks rich, and doesn’t look dated. I think this particular look is also timeless,” D’Angelo adds. “Comfort is also a big thing for me, I’ve never been a fan of really well-designed furniture or restaurants or things like that which are not comfortable.” Rates at The Clifton start at $189 per night.

The newly reopened hotel also gained an impressive food and beverage program with Michelin-starred chef Matthew Bousquet at the helm. The hotel’s bar and restaurant, aptly named 1799, is driven by the area’s wineries and farms.

“It’s clearly a farm-to-table location, it’s a no-brainer; you’ve got these beautiful farms and wineries within a few miles of the property and we have a chefs garden on site — so some of the dishes are lawn-to-table,” says D’Angelo. “Matthew came and cooked for us, and by the first bite of the second dish everyone was kind of looking around at each other going, ‘OK, this is a different level of cooking that I’ve ever tasted in Charlottesville, period.'”

The combination of setting, historical ties, elevated dining and ample accommodations positions The Clifton to set itself apart from other offerings in the area — and, as D’Angelo stresses, makes it a strong venue option for weddings.

“I was married three years ago, but I would have loved to have a wedding here, for sure,” he says.