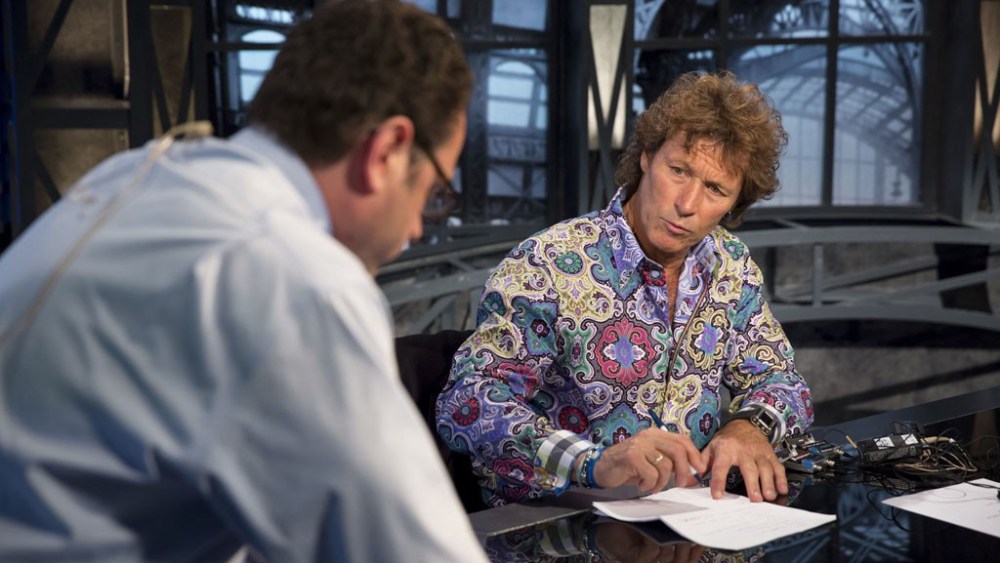 Call it Style Wars on Ice.

Tonight the Los Angeles Kings face off against the New York Rangers in the first game of the Stanley Cup Final at the Staples Center in L.A. While non-hockey fans might yawn at that thought, the fashion world, for once, is taking notice.

Because it turns out that instead of toothless behemoths with sticks, hockey players (or at least some of them anyway) are turning into real fashion plates. And none more so then members of the Kings and the Rangers.

As former Rangers center and MSG Network analyst Ron Duguay, no fashion slouch himself, said, this year’s Cup Final is “Broadway versus Hollywood, flip-flops versus work boots during the day, and then at night casual versus GQ.”

The Kings players are muscular examples of the more-casual lifestyle of their home city, generally donning shorts and T-shirts. The Rangers tend to be more classic, with observers saying players like Henrik Lundqvist look like they just stepped out of the pages of a fashion magazine.

“Some of the best-dressed athletes are emerging from the NHL,” said designer John Varvatos. “The players are taking risks and realizing that men’s wear is fun and not all about oversize suits. We’ve been fortunate to dress players from both teams. Dustin Brown and Jarret Stoll from the Kings always look great in our clothes. Henrik Lundqvist and Brian Boyle from the Rangers understand the importance of slim-fitting suits. We dressed Ryan McDonagh for the past Rangers Casino Night in a gray tuxedo and he looked incredible.”

“We have had a great relationship with New York Rangers’ Henrik Lundqvist,” said Italo Zucchelli, men’s creative director of Calvin Klein Collection. “He has attended our runway shows in Milan, and we have dressed him in Calvin Klein Collection for many events over the past two years. Dressing hockey players and other athletes is always exciting because they embrace fashion; they are great looking and wear the clothes very well and with style.”

Money certainly helps — after all, hockey players now have multi-multimillion-dollar contracts, making it easier for them to buy designer duds (not to mention get good dental work). “We all wanted to look nice, but we couldn’t afford a $2,000 or $3,000 suit from Armani or Canali,” Duguay said. “If we spent $200 off the rack, it was a lot. In my first year in 1977, I made $75,000. And the guys before me made less than that.” In contrast, Lundqvist in December signed a seven-year, $59.5 million contract with the Rangers. “When you have money, it’s easy to buy clothes that make you look good,” Duguay said.

During a photo shoot with WWD in 2012, Lundqvist said he’s certainly not alone in his interest in fashion, but not every player has acquired the same style sense. “A lot of the guys dress well,” he said at the time. “But some guys are still old-school. Hockey is still really old-school, but that’s beginning to change. It comes down to whether they care or not. A lot just want to be comfortable.”

Brian Jennings, chief marketing officer of the NHL, said that 26 percent of the league’s players now are from Europe, “so you see a European influence in the locker rooms.” The players from across the pond tend toward slimmer silhouettes and have no problem “having fun with style. The younger generation [of players] takes a greater interest in fashion.”

Jennings bristles at the stereotype of the grungy hockey player of yesteryear. “We fight against that image,” he said. “Hockey players are good looking, articulate and community-oriented. They have million-dollar smiles and their hair is groomed. Many of them look like they walked off a runway in Milan.”

That wasn’t the case in Duguay’s day, when his off-the-ice persona drew attention and led him to be considered the most stylish player in the NHL.

“To borrow a phrase from the technology industry, he was an early adaptor,” said Jennings of Duguay. “Guys then had their own style, but it was a different era. Today, our players have a much stronger sense of style and they know that their image is an extension of their personal brand.”

As a rule, Jennings said, hockey players look at themselves as part of a team, rather than as individuals, and as such are generally “not flashy. But what they wear off the ice allows them to have an identity.”

That was never a problem with Duguay, who is married to fashion model Kim Alexis, and even costarred in a Sasson jeans commercial in the Seventies.

For him, his interest in fashion “started at birth,” he said. “I’m French-Canadian. I like bright colors, they make me happy and they put me in a good mood. And if you look good, you play good.”

For his on-screen wardrobe today, Duguay chooses Robert Graham. The moment he saw the brand’s brightly colored shirts, he was hooked. “I was like a kid in a candy store,” he said. “And I’ve been wearing it ever since.” In addition to the wildly patterned shirts, Duguay also likes the brand’s jackets, some of which are “funky.” With those, he’ll pair them with a white shirt. “And they’ve made two suits just for me,” he said, adding that he’s also talked the brand into outfitting the MSG crew with Robert Graham ties to wear on the set.

Although he hasn’t replicated his Seventies commercial for Sasson jeans, where he and teammates Phil Esposito, Dave Maloney and Anders Hedberg skated around a rink in their Rangers sweaters and jeans, Duguay is still open to other fashion collaborations.

“We didn’t get a lot of endorsement deals back then,” he said. “But that one got everybody’s attention. Now I’m hoping Robert Graham will use me in their ads.”

Duguay said he was picking up a special Robert Graham to wear at the first Stanley Cup Final game tonight in L.A.