The eatery is located in the city's 16th arrondissement. 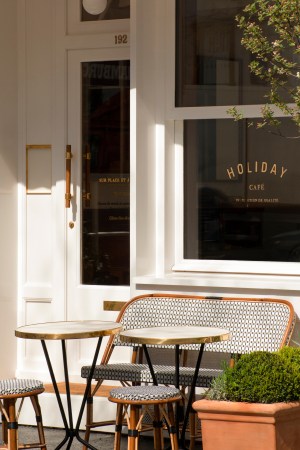 CAFÉ CULTURE: Holiday, the American travel magazine with a fashion vibe, now has a café in Paris by the same name. Located at 192 Avenue de Versailles in the city’s 16th arrondissement, the eatery serves breakfast, lunch, aperitifs and dinner.

Behind it is artistic director Franck Durand who, with fashion journalist Marc Beaugé in 2014, launched the revival of Holiday, which comes out in English twice yearly.

“We are a lifestyle magazine,” explained Durand, whose art direction studio has executed campaigns for fashion houses such as Isabel Marant, Mugler and De Fursac. He noted opening a café is in line with the development strategy of the brand, which has introduced T-shirts and candles.

Its menu was conceived by Daniel de la Falaise, the fashion world’s go-to private chef and nephew of Loulou de la Falaise. French dishes include the “croque-demoiselle,” a twist on the traditional croque-monsieur, with quail’s egg served with a fine herb salad; foie gras, and a mix of charcuterie. For dessert there’s chocolate cake and apple compote, among other delicacies.

It marks a first step to vamp up Villa Boileau, a small, quiet street giving on to Avenue de Versailles — a project supported by Durand. He said the area could also soon boast the additions of a bakery, florist and hotel.

Circulation of Holiday magazine is around 30,000 copies with international distribution. Its regular contributors include Inez Van Lamsweerde, Vinoodh Matadin and Karim Sadli. The next issue, out in September, has a Korea theme. But before that, Holiday is set to celebrate its most recent issue, focused on Argentina, with an event in Paris next month with Berluti.