During World War II, consumer-friendly designs by Adrian and others were sold in MGM cinema shops with major retailers like Macy's. 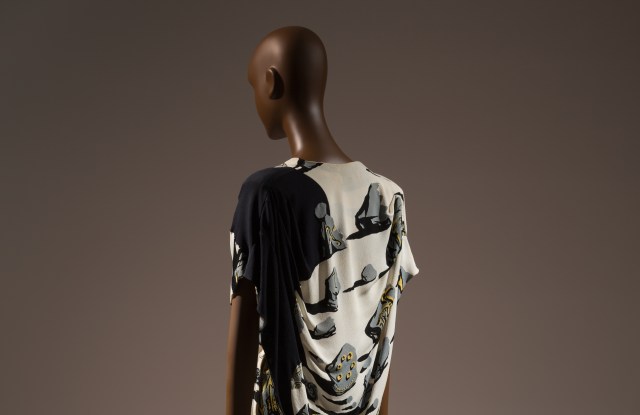 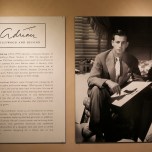 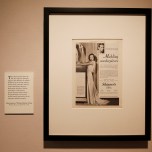 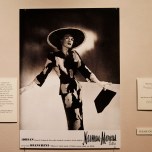 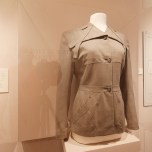 NEW YORK — With more than 250 MGM films to his name and a roster of Hollywood stars including Joan Crawford and Katharine Hepburn, the costume designer Adrian is getting a close-up at the Museum at the Fashion Institute of Technology here.

Beyond costume design, Adrian launched his own label in 1942, and ran stores in Beverly Hills and New York at one time. Opening on Tuesday and presented with the School of Graduate Studies, “Adrian: Hollywood and Beyond” will explore his twin career, but more specifically his avant-garde fabrics. For a dress with a Salvador Dalí surrealist motif, he used drapery and appliqués to create a shadowy effect on the shoulder. FIT’s adjunct professor Sarah Byrd said, “There was a real democratization of fine art at this time. A lot of artists like Calder, Salvador Dalí, Picasso and Matisse were working in the fashion and textiles industry, which is really something you don’t see much of now. If you do, it’s usually a one-off collaboration.”

For another striking printed dress, the designer used mitering, joining two pieces of fabric diagonally to manipulate the pattern of the textiles and to accentuate the waist without the slightest trace of binding. A three-piece evening ensemble used piecing, basically a jigsaw puzzle of different types of materials combined for a larger composition.

The show’s real optical illusion is a checked wool suit with inset lines cut on the bias — intentionally cutting out a fabric and replacing it with another to fill in the void. The final effect was a near-blinding subtlety of “X” motif. Byrd said, “If you don’t pay attention to the actual objects, you really miss out on everything. It’s really forcing everyone, myself included, to look closer at everything.”

Aware of what read well on film and from afar, he also had a firm grasp on fabric and what it could do, one of the graduate students, Sarah Jean Culbreth, said. “Just like any couture salon, he had a team that handled beading, embroidery, tailoring. Actresses had much more control over their images then. That’s why a lot of them loved Adrian and went into a film set saying they wanted to work with him. They knew who else was out there. They knew what looked good on them, what lighting worked for them,” she said, adding that his “beautiful petite” actress wife Janet Gaynor proved to be the perfect model out-on-the-town. The exhibition was inspired in part by remarks Gaynor made on his behalf at his final presentation, which emphasized how he was inspired by the beauty of fabrics.

There is also a 1940 clip of him sketching in “Hollywood, Style Center of the World,” a short film to plug MGM “cinema shops” at Macy’s and other retailers. Starting in the Thirties and continuing through World War II, Adrian and other costume designers created pared-down versions of their looks for everyday shoppers. “Consumers could go to these cinema shops and say, ‘I want to look like Katharine Hepburn in ‘Philadelphia Story,'” Culbreth said.

Through alliances with Wesley Simpson and other textile converters, Adrian used illustrations and prints from Dalí, Marcel Vertès, Ludwig Bemelmans (of “Madeleine” fame) and other artists for his ready-to-wear. And he and textiles designer Pola Stout (a former FIT professor) routinely sent swatches back and forth while finessing their collaborations, Culbreth said. Just as Adrian’s ads reflected the décor of his salon and stores like archways and curving forms, the museum drew from that idea using columns and painted the walls evocative of the glamorous rose hue Adrian created for a Revlon campaign. Gingham, first used for Judy Garland’s costumes in “The Wizard of Oz,” was another recurring theme in his bounty of projects.

With a second home in Brazil, the designer turned to travel, too, for new ideas. Before his death in 1959, Adrian had gotten into men’s wear, designing shirting and neckties. “He never stopped working even when he wasn’t physically well,” said Culbreth.

The exhibition’s parting look is a clip of a Technicolor fashion show in the otherwise black and white 1939 film “The Women” and one from his last film “Lovely to Look At” in 1952. The latter called for a hat for a monkey that mirrored one worn by a model. Nicole Bloomfield, conservation technologist at MFIT, laughed at the precision. “Think about it. He designed that hat.”

More tangible is the mauve gown from “Lovely to Look At” that is nearby. The designer draped a continuous piece of fabric from the waist to a billowing sleeve, encircling the wearer’s head to create a dramatic hood. “MGM gave it to us, and that was it,” Bloomfield said, referring to the mere seconds that the gown appeared in the film. “That was just one of hundreds of costumes that would be made even just for the fashion show sequence in a film not by any lead actresses, just a model,” Culbreth added.