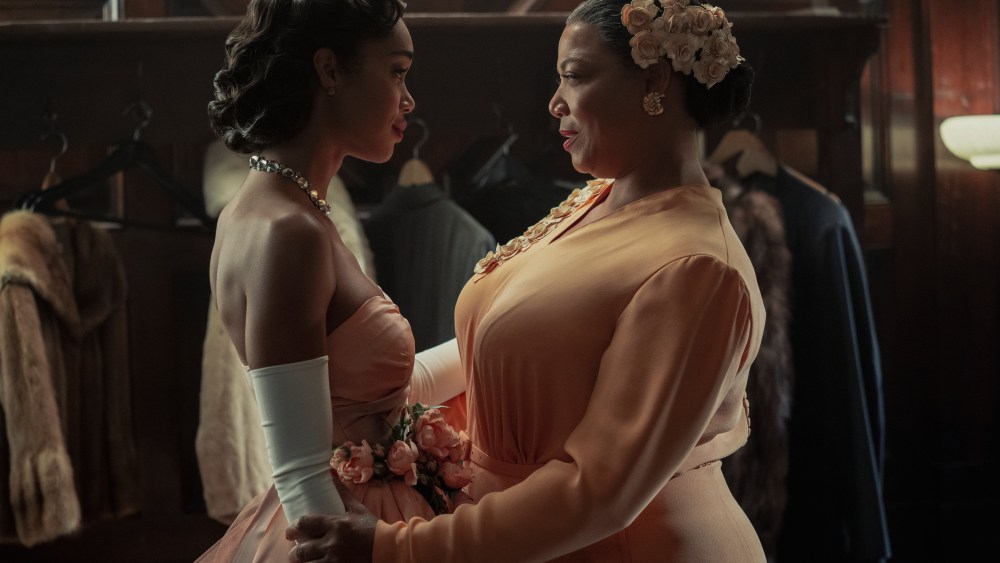 Chronicling a group of actors and filmmakers in Forties Hollywood, some fictional and some real, the twist in the seven-part miniseries is that it rewrites history to spotlight racial, sexual and gender biases that existed in the industry then, and what the landscape might have looked like if they had been busted.

For example, Rock Hudson (Jake Picking) is an openly gay man. African-American actress Camille (Laura Harrier) is cast as the lead in a studio film, one directed by her half-Asian boyfriend (Darren Criss) and written by an African-American screenwriter Archie (Jeremy Pope) at that. And a major Hollywood studio is run by a woman. Imagine!

Murphy and Eyrich were just coming off another period piece, “Ratched,” and were eager to create a different look for this one.

“Ryan was very specific about the color palette, he wanted harvest tones, gold, dark green, russet brown, deep roses and oranges,” Eyrich said of the directive for the project, encompassing 20 to 25 principal characters and 300 background players for each day of shooting in Los Angeles. “It was very much pizzazz, alive, excitement of the war being over and getting to go to the picture show.

“The set decoration, the locations, every prop, every couch and wallpaper, everything was so perfectly curated and we worked together as a team to make sure it was a beautiful piece,” she added of the heightened sense of aesthetics.

For Forties research, they scoured Condé Nast and WWD archives, watched period films with Cary Grant, Fred Astaire and more, and studied the 1989 picture book “Jean Howard’s Hollywood,” with its informal portraits of actors, writers, producers and directors from the era.

“Ryan wanted the have-nots, the ingenues, to look like they came to Hollywood with very little. They lived in small apartments and couldn’t afford a lot of clothes, so the patterns on their clothing might not match, the men might have striped pants with plaid shirts, ladies had cute skirts, shoes and sweaters that might be belted. It was a simplistic look. Then the power players, the studio heads, their wives, the etiquette coach were super-tailored, good fabrics, lots of fur, everything custom-made,” Eyrich said.

For the service station uniforms, the duo looked at Scotty Bowers’ explosive 2013 book “Full Service: My Adventures in Hollywood and the Secret Sex Lives of Stars.” “We weren’t copying the Scott Bowers’ uniform, but we did a lot of research about gas stations at the time, visual references and written references,” Evelyn said of outfitting the boys that pumped gas — and more.

They used Western Costume (there’s even a scene that was shot there) and other costume houses to outfit background players and ingenues, and repeated their clothing throughout the series. For contrast, they custom-made most of the looks for the power players, including grand dame LuPone. “Patti can work any costume, she is undaunted by huge sleeves and trains,” said Evelyn, referencing the dusty rose, marabou-trimmed robe the diva wears for a sexy scene from episode one that takes place at the Beverly Hills Hotel.

Like many of the players, Holland Taylor was an enthusiastic collaborator in creating looks for her female studio exec character, and even brought in photos of her mother from the Forties as inspiration. One of the designers’ favorite looks, used for a screening room scene, is a bordeaux color dress with beautiful hand-chevroned work, an example of the care they took with details.

For the leading men, they cheated the classic Forties, high-waisted suit silhouette a tad to make it appeal to contemporary body types and audiences, bringing the baggy pant legs in a bit. “Darren Criss could walk right into a period suit, but when we had the opportunity, we made them for him,” Evelyn said. “Plus, there were four other shows in town shooting Forties at the same time,” Eyrich said of the competition to pull period clothing at costume houses, adding that they had the hardest time sourcing seamed stockings. “We would go through 60 or 100 pairs a day.”

The series has a glamorous Oscars scene that required some quick changes for the designers. “At the last minute, the Oscars color palette got changed to something more pastel,” said Evelyn, who was left with just four days to adjust. “It was an iconic Ryan Murphy moment when he has a brainstorm, and you are so on board, but you are also so under the gun but you know you have to get it done because it’s going to be amazing.”

The designers had already custom-made and fit a form-fitting rust dress for LuPone, with a diamond necklace with enormous topaz to match. To soften the rust color, Eyrich had the idea of adding fur trim to the shoulders and chest, “which just took it to the next level,” Evelyn said.

Dressing real-life icons was another challenge. “For Rock Hudson, we were meeting him before there really were any pictures of him. He didn’t become famous until the late 1940s, early 1950s. So we took those pictures, and what we knew about his biography and imagined it from there,” Evelyn said. “The script kept referencing him driving a pickup truck and coming from a small town, so that’s how we dressed him…coming into the big city and feeling like an outsider.

“Anna May Wong’s direction came from Ryan,” added Evelyn of the character’s rich silks and broad shoulders. “She was old glamour that had been faded because she had been edged out of Hollywood. We looked toward the Thirties, Chinese culture and Hollywood glamour.

“For Hattie McDaniel, we re-created a scene that actually happened, and re-created it down to the brooch she wore on the front of her dress. That’s where we had to research a lot for the [peach] color of her dress, because there were no color photographs. So [our researcher] really helped us there with written documentation.”

As for what the designers hope viewers will get out of the series, it’s pretty simple: “It was so interesting learning how much has changed but how much has stayed the same,” Evelyn said. “It’s hope for a reset, for openness, for change, and that we get to be the world we want to be.”