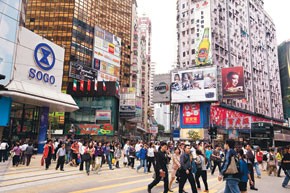 In Hong Kong, it started with SARS. When the city was devastated by an outbreak of Severe Acute Respiratory Syndrome in 2003, virtually no tourists visited, delivering a blow to a city that had been an acclaimed shopping destination.

“There were only eight rooms booked at The Peninsula,” recalled Shirley Chan, vice chairman of the Hong Kong Retailers Marketing Association. “People were scared, it was a gloomy time. So China opened the Individual Travel Scheme tourist program, giving people permits to come to Hong Kong.”

That decision proved monumental — for both Mainland Chinese, who became able to travel independent of tour groups, and for Hong Kong, which saw a remarkable change to its retail environment. The resulting numbers were staggering.

“There are several thousand people coming every day,” said Paul Husband, managing director of Husband Retail Consulting. “There are something like 16 million to 17 million Mainland Chinese here each year, out of 28 million total visitors. It’s the biggest single factor in retail today.”

“People come here because we don’t have sales tax and we don’t have duty — so prices are more competitive. At the same time, there were so many fakes in China, people also came here to find genuine products,” explained Chan. And as the influx of Mainland tourists grew, “a lot of international brands took the opportunity to open here.”

Ever savvy, Hong Kong’s property developers anticipated the change. In 2005, a consortium of developers built the International Finance Centre in front of the new ferry piers. Lane Crawford, the region’s leading specialty store, moved its flagship there to take advantage of the traffic.

Similarly, Hongkong Land, Central’s biggest landlord, made bold moves. “Hongkong Land wanted the biggest stores and the biggest brands,” said Husband. “A 10,000-square-foot store is very expensive to build — it’s millions of U.S. dollars. But finding the space for luxury brands has made Hong Kong an even more interesting place to shop.”

The developer completely refurbished The Landmark to accommodate large flagships for names like Louis Vuitton and Gucci, and created flagship spaces in its other buildings for Prada, Giorgio Armani and other brands.

On the Kowloon side, MTR Corp., which operates the rail system and owns 13 shopping malls throughout the city, began its most ambitious project to date — Elements, a 1 million-square-foot shopping mall in a previously undeveloped district. It opened, naturally enough, on China’s National Day holiday last October. Not surprisingly, considering its connection to the transportation system, it has its own subway stop as well as serving as a cross-border bus terminal.

“We have been quite blessed,” said Betty Leong, chief retail development manager for MTR Property Management. “We opened with a bit of a surprise and ever since traffic has been above average. It’s beyond our expectations.”

Elements, which opened with 100 percent occupancy, is home to new brands for Hong Kong, including Karen Millen and Luella. Leong stressed that while weekend and holiday traffic at Elements is high, weekday numbers are only a fraction of what they will reach when the adjacent W and Ritz-Carlton hotels and the ICC office tower finish construction. “I would say that if we opened 30 percent above expectations [without those], we expect to be another 30 percent up with all of those coming into play by the end of the third quarter this year.”

She is not alone in big expectations. Although Husband estimates rents in the city’s top malls run a whopping 300 to 400 Hong Kong dollars per square foot a month — which converts to roughly $450 to $600 per square foot per year, at current exchange — there is still fierce competition to acquire space, and neighborhoods are expanding.

While the rapid expansion of international brands and introduction of megaflagships was welcomed by Mainland shoppers, the trend has not been great for everyone.

“Loyalty is nothing if there is a newcomer — you really have to have a good relationship with the landlord and even then you might be told to try another mall. The competition is getting tougher and tougher,” Chan said.

But Husband is not worried. “This is like any other city, evolving and growing. Instead of having just downtown Hong Kong and TST [Tsim Sha Tsui], there will be three, four or five interesting new retail destinations,” he said.

And as long as Mainlanders keep coming in the millions, it seems Hong Kong will gladly fill their shopping needs.