Where to Eat on the Last Day of New York Fashion Week: Men’s 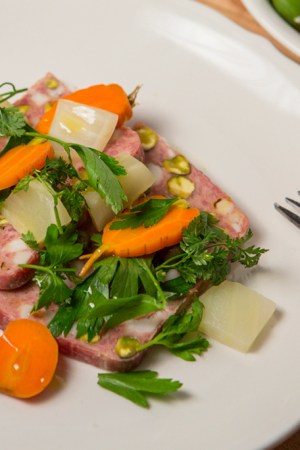 A new restaurant has landed on the swanky TriBeCa corner of Greenwich and Spring Streets that’s hoping to serve both the year-round local clientele as well as the newfound fashion week crowds streaming out of Skylight Clarkson Sq. Houseman is a four-minute walk from the venue, the site for virtually all of New York Fashion Week: Men’s this week, and where many designers will stage their women’s ready-to-wear come September. Luckily, chefs Ned Baldwin and Adam Baumgart are prepared for the fashion set.

“The primary goal has always been to open a neighborhood restaurant,” says Baldwin, who worked at Prune for five years and who named the eatery after the Norsk word “husmanskost” translated as “everyday food.” “You have to leave feeling like you haven’t eaten a meal that you don’t want to eat again for a month. So it’s about a certain amount of temperance with fat and with salt specifically.”

Using fresh ingredients — veggies from Massachusetts and Pennsylvania, and fish from the North Fork of Long Island — the duo created a menu with items including roasted eggplant with sesame sauce and basil; pickled bluefish with crunchy vegetables and grilled lamb rack with artichokes, peas, yogurt and mint. (“Then again, our burger is a complete violation of salt and fat,” Baldwin stipulates of the requisite staple. “It’s a delicious kind of juicy bomb.”)

They also took into account the design of the space, which will please the likes of Marina Abramovic and Richard Gluckman — neighbors who have both already stopped by for dinner multiples times since the spot opened a few weeks ago. Tables are made with recycled bowling-alley wood and Lindsey Adelman fixtures light the space. “[I want] to be a restaurant that I’ve experienced when I’m in European cities,” says Baldwin. “I’ve lived here since 2000 and the line is I’ve been looking for 15 years for a great neighborhood restaurant and I’ve finally thrown in the towel and opened one.”