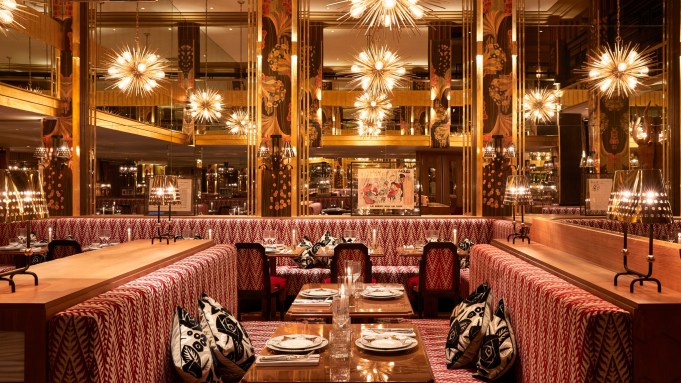 PARIS — Le Boeuf sur le Toit, the famed cabaret that was the center of Paris nightlife in the Twenties, is vying to regain its status as a hot spot, thanks to an ambitious overhaul masterminded by fashion designer Alexis Mabille.

Mabille has redesigned the space — from the carpets to the cutlery — in the spirit of an Art Deco “temple” with Egyptian-inspired accents, divided into three spaces: a brasserie, a bar and a music hall that will honor the venue’s performance tradition.

“The Boeuf sur le Toit was the rallying spot of all the leading artists of its time,” he said, reeling off the names of Jean Cocteau, Marcel Duchamp and Francis Picabia. Coco Chanel, Christian Dior and Pablo Picasso were also among its famous patrons. “They danced on the tables, they drank too much, they got high and they sang.”

In fact, the French expression “faire un Boeuf,” meaning “to have a jam session,” is a direct reference to those famous impromptu sessions that included the likes of composer Darius Milhaud — who gave the venue its name —– or pianist Arthur Rubinstein.

Founded in 1922, Le Boeuf sur le Toit moved around frequently, landing at its current address in 1941. Though it enjoyed a revival in the Eighties, in recent years the brasserie had become a little dusty.

Only the exterior of the building has been left intact. Aside from the Mediterranean-style entrance hall, which opens onto a fresh seafood counter, the decor is opulent, with mirrors, faux marquetry panels and richly patterned carpets creating a deceptively familiar ambiance.

“The name is so mythical, but a lot of people didn’t even know it was still open,” Mabille noted.

“Over time, places sometimes lose their identity. My idea here was to restore that sense of identity, as if we had just spruced up a mythical venue, when in fact we completely rebuilt it from scratch, focusing on every detail to make it come alive,” he explained.

Mabille, whose sophisticated tuxedos and glamorous evening gowns have won him fans including Katy Perry, Lady Gaga and Dita Von Teese, recently presented an all-white collection during Paris Couture Week. But for this project, he let loose a riot of color and patterns.

The clashing fabric designs are a mix of his original creations, which include the carpets, and retro-style furnishing designs from the likes of Holland & Sherry and Casal, which produced one of its fabrics in a custom shade of scarlet, the dominant tone of the space.

“The architecture of the space is very symmetrical and rectangular, so I wanted to mix shadow and light, colors and patterns in combinations that might look a little scary on paper, but once you see them together, it all clicks,” he explained.

Lighting is just as important. Starburst fixtures, loosely inspired by the Lobmeyr chandeliers at the Metropolitan Opera House, lend the dining room a golden glow, amplified by the mirrors lining the walls. “It’s about seeing and being seen — you can be hidden in a corner and still watch everything that’s going on,” Mabille said.

With its low banquettes and candle lighting, the music hall has an intimate feel, with velvet curtains featuring a glitter scallop motif, and a small stage framed by three arches. “It’s a bit of a fantasy of 1930s Hollywood that has been transported to Paris, with performance that can go from jazz to electro,” he mused.

While the restaurant officially opened on Monday after five months of renovations, the performance space, with a capacity for 85 people, will start hosting concerts from mid-March. A private dining space on the first floor features large windows overlooking the stage, while an adjoining smoking room doubles as a cognac bar.

On the walls, reproductions of drawings by Cocteau — include a giant replica of his sketch of a bull and bullfighter on the ceiling of the bar — will be mixed with contemporary works by Mabille’s close friends, artist Marie Beltrami and Simon Buret, who does double duty as one half of the French band Aaron.

Mabille has salvaged a handful of original features, like the sculpture by Jean Marais, the French actor who was Cocteau’s muse, of a bull’s head with its horns shaped like a lyre. It doubles as the restaurant’s logo, featured on the front of the menu concocted by chef Jean-Pierre Vigato.

Among the signature dishes is the “Boeuf sur le boeuf,” a beef steak served on a bed of boeuf bourguignon sauce, alongside traditional brasserie fare like seafood platters and bouillabaisse. Desserts include French classics like profiteroles, baba au rhum and crème brûlée.

Meanwhile, the bar serves cocktails with Dadaist names, like the “L.H.O.O.Q.” inspired by Duchamp’s salty take on the Mona Lisa (pronounced in French, the letters sound like “Elle a chaud au cul,” or “Her a– is on fire” in English.)

Mabille has been multiplying interior design projects since designing a pop-up bar for Cointreau in 2012 and a bathroom concept with Jacob Delafon in 2017. Growing up, he assisted decorator Patrice Nourissat, his great-uncle, on sets. “If I hadn’t been a fashion designer, I would have gone into interior design,” he said.

With its glamorous and intimate vibe, Le Boeuf sur le Toit is the perfect reflection of his signature boudoir aesthetic. “The idea is for it to be chilled out, comfortable and warm — the kind of place where you want to hang out all night,” Mabille concluded.