Led by Amar’e Stoudemire, the Knicks are relevant again — and the front row is bustling. 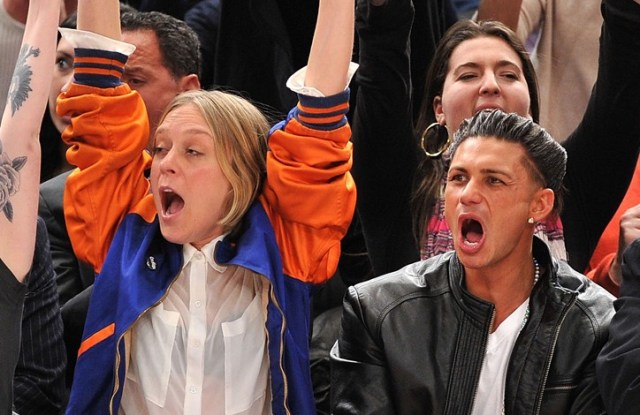 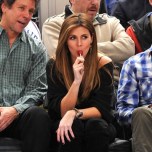 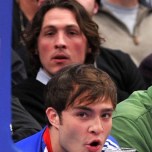 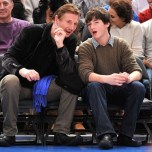 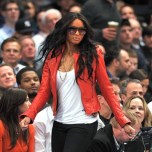 NEW YORK — Of course the pictures were going to be everywhere.

This story first appeared in the January 21, 2011 issue of WWD. Subscribe Today.

“The Knicks had an unbelievable game, and we couldn’t believe it, what we were witnessing, so we were just cheering on the team,” the “Jersey Shore” star recalled on Wednesday, two weeks — and a hundred speculative blog posts — after the Jan. 4 game, a statement win for the Knicks against the best team in the league.

On a separate phone call, Sevigny, who’s been a courtside fixture at the Garden for several years, said she expected the attention as soon as DelVecchio sat down next to her for the second half. “I knew that, of course, people were going to — because it’s just such an odd pairing — that people would be like, ‘Oh my God, it’s the apocalypse. What the hell was going on?”

While things might not be quite apocalyptic, something only a few shades less perplexing has been going on at the Garden lately. The Knicks — a once proud club that has stumbled through a decade of losing seasons, a six-year playoff drought and innumerable personnel missteps — are relevant again. Led by Amar’e Stoudemire, the gregarious big man in Rec Specs who was only supposed to be a consolation prize in last summer’s LeBron James sweepstakes, the team is currently in second place in the NBA’s Atlantic Division with a record of 22-19. If the season ended today, the Knicks would be playoff-bound.

So naturally the front row is bustling in a way reminiscent of the halcyon days of Frazier, Bradley, Reed and DeBusschere. But there’s something else going on in Row AA this year that stands in stark contrast to those staid, often empty luxury boxes at Citi Field and the new Yankee Stadium. The A-list crowd at the Garden seems to actually be engaged in the action on the court. Their BlackBerries and iPhones are holstered, for the most part. They’re drinking beers and eating pizza. They’re cheering on with the guy in the next seat, just like a common fan way up in the rafters.

In short, the front row at the Garden is the exact cultural nexus at which Sevigny and Pauly D do meet (although let’s not push it — they don’t date).

There was Michael J. Fox, Elizabeth Banks and Russell Simmons all within five feet of a fist-pumping Tracy Morgan on Oct. 30 against Portland. There was Drake and Maxwell palling it up on Dec. 17 against Miami. There was John Mayer and Liev Schreiber laughing off a loss to Sacramento on Jan. 14. And there was Mayor Michael Bloomberg, not exactly smiling, but at least clapping along with Chloë and Pauly at the Jan. 4 Spurs game.

“I think [with] the economy coming out from where it was to where it is, we’re ready to have some fun,” Scott O’Neil, the president of Madison Square Garden Sports, told WWD. “We’re ready to smile again. The city is. We’re ready to do deals; we’re ready to be out and about. We’re ready to cheer for the Knicks. It’s a lot of things coming together. It’s just put a bright light and a lot of smiles in the Garden.”

O’Neil has plenty to be happy about. For the first time since the 2001-2002 season, the Knicks have sold out of season-ticket packages. According to Garden figures, the club has completely sold out 18 of 20 home games so far this season, a feat it only managed 26 times last year. And that’s just the plebes. O’Neil said the publicists and marketing staffers who handle celebrity ticket requests have all been plenty busy of late.

“More people [are] coming to us,” he said. “There’s never been a situation where we’ve had to tug and pull people here, but now it’s about managing the demand.”

Of course, long-suffering stalwarts like Woody Allen, Spike Lee and Paul Simon are there, too, but there are new characters as well. Take Doug Ellin, the creator and head writer of HBO’s “Entourage.” A native son of Merrick, Long Island, Ellin has been cheering on the Knicks long enough to have worshiped Bernard King, the mid-Eighties small forward with the mean turnaround jump shot. Long enough, he said, to have been mugged the first time he ever ventured to the Garden by himself as a 13-year-old in New York’s bad old days.

“The Spurs game was the first time I was ever in the front row,” Ellin said this week. “My whole childhood I wanted those seats. You want to get close to those guys. I idolized those guys, and you just wanted to be as close as possible.”

Though Ellin has made it to a game or two a year throughout the drought (he used the words “dead,” “depressing” and “pre-Ewing” to describe the atmosphere), it wasn’t until this season that he used his juice to get courtside.

“I had a couple of contacts, so I called the Knicks and they were very nice and gracious to give me the seats,” he said. “It is tough though. Before I thought to make a call like that, I called a ticket broker, and they were like, ‘We got nothing for the Spurs game.’ It was tough.”

It’s all enough to raise the specter of that other great Mecca of celebrity basketball fandom, the Staples Center, home to the Los Angeles Lakers and a venue Ellin has written into “Entourage.”

“When the Knicks are good, New York just has a whole different vibe to me,” he said when asked about the two. “It’s got a whole different energy. There’s no comparison to going to the Staples Center. I’ve been to Lakers games for 10 years and they’re winning championships and there’s no comparison…. Out there, it’s just a bunch of transient transplants who love the Lakers because the Lakers are great, but people in New York, they love the Knicks.”

As long as they keep on winning.