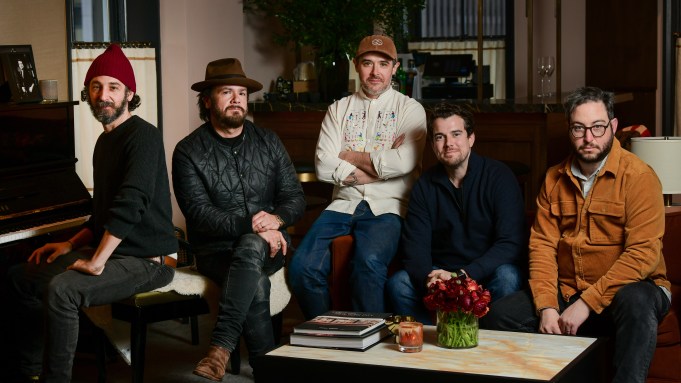 A team of dining and hospitality veterans is reviving the nightlife scene at Rockefeller Center.

Pebble Bar will open in the quaint four-story townhouse overlooking Sixth Avenue at 49th Street in New York, easy to miss amidst its flashy surroundings. Magnolia Bakery, which draws a constant lineup of tourists, is housed on the ground floor — but the building’s impressive legacy is rooted on the upper levels. For over a century, the townhouse was home to the iconic bar Hurley’s, which served a rotation of characters in entertainment until its closure in 1999. Bold-face regulars included late night hosts Johnny Carson (who had a private entrance to the bar) and David Letterman, “SNL” cast and crew, and novelist Jack Kerouac.

It’s a tough act to follow, but partners Carlos Quirarte, Matt Kliegman, Noah Bernamoff, Matt Charles and Julian Brizzi — who in various permutations operate The Jane, The Smile, Ray’s Bar, and other downtown hotspots — are up to the task. “We knew we weren’t gonna be able to recreate Hurley’s, but instead do our version of it today. And we had a bunch of friends who kind of wanted to help see that happen,” says Quirarte.

Celebrity investors in Pebble Bar include Justin Theroux and Nicholas Braun (also investors in Ray’s Bar downtown), as well as Mark Ronson, Pete Davidson and Jason Sudeikis. “People like Pete and Sudeikis, they know the history [of Hurley’s],” says Quirarte. “[Davidson] had heard of it from cast members, Sudeikis was very familiar with it and what some of the old ‘SNL’ cast members would call it — at NBC it was famously known as Studio 1-H.”

Pebble Bar joins the ongoing dining renaissance at Rockefeller Center. Other recent and forthcoming projects in the area include restaurants led by buzzy chefs including Ignacio Mattos and Greg Baxtrom.

“Carlos [Quirarte] and I have participated in many different shades of nightlife over the last 13 years,” says Kliegman. “And here, there’s no question that there’s a very large appetite for after work drinks, pre-theater drinks, post-theater drinks, post-show cocktails — it kinda keeps going from there. Part of the appeal for us is that while it is a different shade of nightlife than some of the things we’ve done downtown, there’s great culture in and around Rock Center between theater and entertainment and music,” he adds. “These are the kinds of businesses that we’ve always worked with downtown. We feel there’s a great touchpoint for us, it just happens to be in Midtown.”

The multilevel space was designed by Gachot Studios to reflect the residential intimacy of the building. The second floor features an expansive brass-accented bar overlooking Sixth Avenue, while the third floor dining room features wood tables and curved leather banquettes and an oyster bar. The fourth floor houses a private events space, Johnny’s — named for Carson — and is accessible by a private elevator, a nod to its namesake. The room features vintage seating and an upright — with so much musical talent nearby, impromptu performances are inevitable.

The food menu is led by Carlos Barrera and features easy snacks, a raw bar, and small dishes; the beverage program, headed by Matthew Charles, nods to classic cocktails and riffs on the building’s history through drinks like the Martini 1-H. Local breweries and global wines are also featured.

The team mulled who might be hanging out at Hurley’s if the bar was still open in 2022 — and concluded that it would likely be a similar mix of people in the arts, news, music, as well as tourists. It’s the same crowd they hope will frequent Pebble Bar, and they’ll find out soon enough — the bar opens on Feb. 28. “We pay homage [to Hurley’s] by providing a venue that can host the same kinds of people,” says Kliegman. “We want to be a venue for them, as well as all the other great people that make New York, New York.”