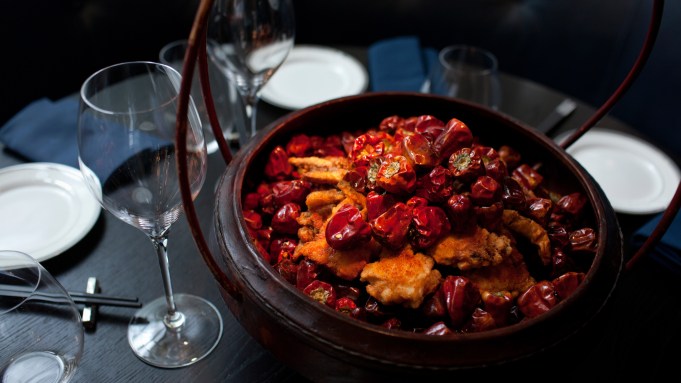 When the iconic Le Cirque closed at the end of 2017, it left in its wake memories of a different, more glamorous New York dining era and a vacant ground-level restaurant space in the horseshoe-shaped One Beacon Court. But that distinctive space has finally found its next tenant: Hutong, an upscale Chinese restaurant.

The opening marks the first expansion into the U.S. for the Hong Kong-based Aqua Restaurant Group, which runs dining concepts in London, Hong Kong and Beijing.

“New York’s always been a huge dream for us, because if you think about truly global cities, there are really only London, Paris and New York,” says group founder David Yeo. “Yes, Hong Kong is very international, but it’s different from being global.”’

Yeo heeded the call of regulars at the other two Hutong locations (London and Hong Kong), who noted the potential for the concept in New York.

“Everybody said to us, ‘we’ve got no shortage of Western cuisines, but something like Hutong, which is pan Northern Chinese, we just don’t have this, and not of this quality,'” says Yeo.

While many restaurants start with a chef, Hutong shies away from chasing trends and is focused instead on delivering the concept that has been crafted in Hong Kong and London. While it can be difficult to find an available slice of the New York dining scene to occupy, Yeo saw an opportunity to bring upscale, high-quality Pan Northern Chinese cuisine Stateside. Signature dishes include a crispy soft-shell crab with Sichuan dried chilli and Roasted Peking Duck. While the classics have carried over, the New York menu embraces the availability of local ingredients, with seafood being a large focus; similar to its London and Hong Kong outposts, dim sum will be a main feature of Hutong’s lunchtime offerings.

Yeo is aware (and yes, nervous) that Hutong will likely be compared to Le Cirque, at least in the beginning.

“I really wanted the space, but I was a little bit afraid of taking the space knowing what it’s like to take over an iconic space,” he says. “Like the Four Seasons — I was shown that before it changed hands and I didn’t want to take that space for two reasons: one, it was iconic and everybody always forever called it the Four Seasons space. But also, a lot of things were landmarked, so you couldn’t actually bring ourselves. It’s almost like moving into a home and then you’re not able to decorate it.”

Not the case where they ended up. The interiors have been completely redone, tapping into the Art Deco heritage of New York and Shanghai. On the ground floor, the restaurant is separated into two distinct spaces, a more formal dining room and a casual bar area. The main dining room is outfitted in dark blue tones, with angular mirrored accents tracing the vaulted room and a white marble fireplace. Upstairs in the private dining areas, tables are round with a Lazy Susan center, with screens providing room distinction. Door handles take the shape of a silver Eternity Knot, and Aqua’s logo, a modified ankh, is inscribed on the back of every chair in the bar room.

The aim for Hutong isn’t to become a clubby hot spot in the vein of a Tao or Buddakan; instead, the emphasis is on cultivating a following of patrons equally likely to frequent the spot for lunch as dinner; the gaggle of corporate firms nearby — not to mention Bloomberg’s headquarters — is likely to help fill many of those spots. It’s upscale, but not stuffy, fine dining, and the team is hoping to create an experience that can also skew casual.

New York may be the first stop in the U.S., but Yeo is eyeing expansion to Paris as well, although he notes that the group’s focus is really Stateside for the time being. “We clearly have aspirations, but I think my focus at the moment is to do right by this restaurant and serve the people of this great city well,” he says. “And if we can do that and make it a familiar place for them to want to dine, I think we’ll have done our job and we’ll look a little bit farther.”