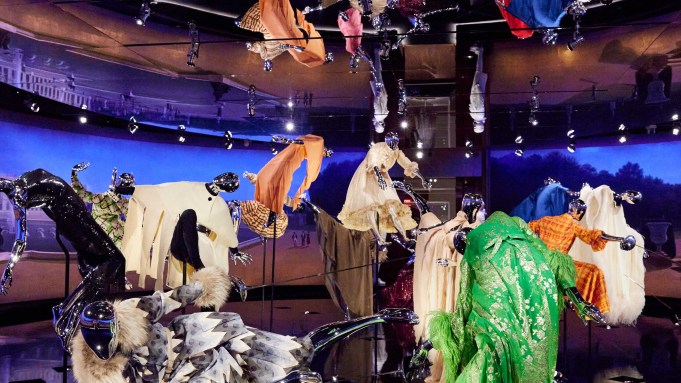 Defining moments in 19th- and 20th-century American fashion anchor “In America: An Anthology of Fashion,” but nine big-name film directors have cast those designs in a more current light.

Encompassing 100 examples of men’s and women’s attire, the show explores some of the untold and incomplete stories about American fashion from the 19th to the mid-to-late 20th century. Opened in 1924, the museum’s American Wing includes three floors of finely appointed decorated rooms that were designed to give visitors a dose of time travel into the past. The wing now has 21 period rooms that cover 300 years, although they have been given broader narratives that touch upon gender, race and class. But the exhibition is contained to the first floor with the directors’ cinematic vignettes of select period rooms interspersed with case studies.

During a preview Sunday afternoon, the Costume Institute’s Wendy Yu curator in charge Andrew Bolton said: “A lot of the names aren’t household names. The ultimate ambition is to make people think differently about the history of fashion and to think about it in a more nuanced way, and not accepting received histories…many of these women in this exhibition were important and influential in their day. But they just seem to have been forgotten and overlooked.”

The second installment of a yearlong exhibition dedicated to American fashion that marks the Costume Institute’s 75th anniversary, “In America: An Anthology of Fashion” delves into the bedrock of American fashion as it relates to the complicated histories of the American Wing period rooms. “They look effortless but the amount of decisions and micro decisions that were made was astonishing,” Bolton said. “It’s been one of the most complicated shows we’ve ever done, but rewarding.”

The roster of big-name talent includes Martin Scorsese, who envisioned a cocktail party in a 20th-century living room by Frank Lloyd Wright adorned with mannequins dressed in Charles James gowns and a faintly menacing male figure looking in from outside. Chloé Zhao recreated a Shaker Retiring Room from the 1830s with Claire McCardell-wearing mannequins and a levitating figure that is meant to be reminiscent of Mother Ann Lee.

Not to be missed is Tom Ford’s take of “The Battle of Versailles,” the 1973 fashion showdown between American and European designers at Versailles. Ford reimagined airborne chrome mannequins fencing and midair martial arts-like with a Stephen Burrows dress and other designs that were shown in The Battle of Versailles in the gallery with John Vanderlyn’s 1819 panoramic view of Versailles. Another standout is Janicza Bravo’s reimagination of the Rococo Revival Parlor featuring work by Marguery Bolhagen and the Gothic Revival Library loaded with designs by Elizabeth Hawes. A few cans of spinach are tucked into the display as a wink at Hawes’ book “Fashion Is Spinach.” Bolton said: “She’s captured Elizabeth Hawes’ sense of humor brilliantly. There are so many layers to it and all these little cues. One mannequin has Hawes’ obituary pinned to it. She designed a dress for Wrigley Spearmint gum so there’s a Wrigley Spearmint gum wrapper. There’s the [1932 ‘Ten Minutes to Live’] film by the first Black director to make a film in Hollywood, Oscar Micheaux. There is also a sweater that Elizabeth designed for a male client to wear to Los Angeles club in the 1970s that has a telephone number. It is draped on a banquette. If you were to spell it out, it says f–k you. There are loads of subtleties. That’s the case in every single room.

”One of the brilliant things about working with the directors is that they look at every single shot,” Bolton said. “They consider every single detail and think about how you experience it. Even though there are static mannequins, they try to convey dynamism through these really subtle details.”

One of the case studies references the 1932 campaign “American Fashion for American Women” that the late Lord & Taylor executive Shaver launched. Vera Maxwell, Bonnie Cashin and McCardell are among the featured designers.

“Even in the ’30s and ’40s when Dorothy Shaver was promoting this initiative, you had other women designers who didn’t participate but were doing their own thing and often wearing custom clothes. That narrative [which is also featured in the exhibition] I am really happy with. It does challenge that received history of American sportswear tradition,” Bolton said.

Sofia Coppola dove into the McKim, Mead and White Stair Hall and Worsham-Rockefeller Dressing Room with the emphasis on clothes by Franziska Noll Gross and Mathias Rock and other designers. Coppola recruited sculptor Rachel Feinstein to create distinctive faces on the mannequins, which painter John Currin touched up. Julie Dash did the honors in the Greek Revival Parlor and Renaissance Revival Room. The latter features four designs by the unheralded Ann Lowe, who created Olivia de Havilland’s Oscars gown in 1947 and Jacqueline Kennedy’s wedding gown in 1953. To illustrate how Lowe received little public recognition, there are seamstress-like figures decked out in black with black netted veils tending to each of Lowe’s designs.

Regina King recreated a 19th-century parlor from Richmond, Virginia, with three dresses by Fannie Criss Payne, who was born in 1867 to formerly enslaved parents. In the Richmond Room, visitors will hear Amanda Gorman and King reading “& So” and “Call Us” from Gorman’s “Call Us What We Carry” poetry collection. Autumn de Wilde handled the Baltimore and Benkard Rooms with wit.

And Radha Blank projected Black women’s hands onto a L.P. Hollander & Co. wedding dress. As Blank noted in a placard: “Hands that, by day, made garments and cleaned white folks’ houses, and by night, ‘caught babies’ and conjured African spiritual practices not meant to survive the Middle Passage.”

Open to the public on May 7, the exhibition will run through Sept. 5, which will also be the closing date for the first part, “In America: A Lexicon of Fashion.” If the well-known filmmakers weren’t enough to rev up interest in the spring show, the star-spangled celebration of American fashion will get a massive amount of media attention through Monday night’s Met Gala. And in advance of that drum roll, First Lady Jill Biden has been enlisted to attend Monday morning’s media preview of the exhibition.

By spotlighting unheralded designers such as Lowe, the Met seems to be trying to right some of the wrongs of American history, as are multitudes of other museums and cultural institutions. Bolton said: “It’s reinterpreting, not correcting. It’s just readdressing and presenting a nuanced interpretation of American fashion. It’s more about readdressing some of those forgotten and hidden designers,” citing Lowe, Hawes, Eta Hentz, Bolhagen and others.

While some of the featured designers like Halston, Oscar de la Renta, Anne Klein, Bill Blass and Brooks Bothers will be familiar names to brand-conscious visitors, others like Bolhagen, Payne, Hawes, Madame Olympe, Hentz and Jessie Franklin Turner will no doubt account for many Google searches. Even examples of designs by such American stalwarts as Norman Norell, McCardell, Nettie Rosenstein and even Burrows may lead gallery goers to further online exploration.

Along with the filmmakers’ period rooms, there are six “case studies” in the American Wing galleries that focus on historical garments that reflect the development of American fashion from the 19th to the mid-to-late 20th century. Two Brooks Brothers coats, including one that was worn by an unidentified enslaved man, are on view. That controversial garment is housed at the show’s entrance, along with an ensemble worn by George Washington and another that belonged to Abraham Lincoln. The Costume Institute Collection’s earliest American design that has a label identifying the creator — a dress dating back to around 1865 by the New Orleans-based dressmaker Madame Olympe — is another key element.

Stephen Jones created all of the headpieces. Just as fashion is still often about collaborations, so, too, is museum curating. Bolton organized Part Two with The Costume Institute’s associate curator Jessica Regan, the Marica F. Vilcek curator of American decorative arts and supervising curator of the Ratti Textile Center Amelia Peck with support from the Lawrence A. Fleischman curator in charge of the American Wing Sylvia Yount.

Lamb Design Studio’s Shane Valentino oversaw the design of both parts of the exhibition with the Met’s design department. And the cinematographer Bradford Young (whose portfolio includes “Selma” and “When They See Us”) teamed up with Valentino on the lighting. Franklin Leonard, a film executive and The Black List founder, worked as an adviser on the exhibition.

Bolton said, “This one took a huge, huge team because we were working with nine creative film directors. They all have their creative opinions.”