Leading to the fourth edition of Photo Vogue Festival, the exhibition will be open until Nov. 13 at Milan's Palazzo Reale.

MILAN — Dutch fashion photographers Inez van Lamsweerde and Vinoodh Matadin roam relaxed across the rooms of Milan’s Royal Palace, looking satisfied at the outcome of the exhibit the duo are mounting in the historic venue.

Named “Inez & Vinoodh Hi-Lo Transformers” and running until Nov. 13, the show hinges on key images shot by the photographers but turned into big, hand-painted billboards. The artistic twist aims to show a contrast between the high-tech photography of the duo and low-tech required by painting, and is enhanced by the juxtaposition with the richly decorated rooms of the Palazzo’s Prince Apartment.

“Having a show in Palazzo Reale is a dream come true. We’ve always dreamt of bringing the exhibition that we have outside on the streets by means of billboards of all the different campaigns that we do for various fashion brands,” explains van Lamsweerde. “We see the streets as our public gallery and art space; we even went so far once to ask if we could have back the billboard when it came down and it’s in our storage somewhere, but it’s a big pixelated photograph basically. And walking around New York and Brooklyn you see these giant wall paintings that are done by Colossal Media that are ad campaigns like Gucci or Saint Laurent, painted on the walls outside. We’ve always dreamt of having that kind of a translation of our work but then bringing it back inside.”

To do so and bring inside a museum an art form meant to be delivered outdoors, the duo partnered with the same company on the project. “This was our chance to ask the people of Colossal Media to paint our work on a large scale… It was an amazing opportunity to see our work this big — because we see everything so small on the phone now, no one sees anything big anymore,” continues van Lamsweerde. 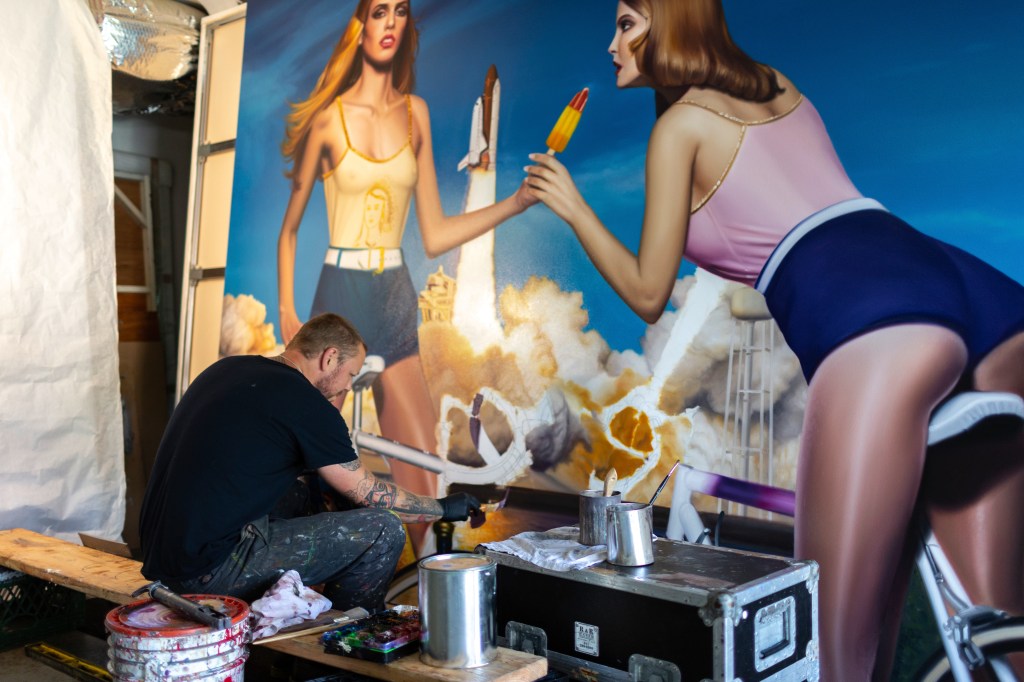 Art works include hand-painted replicas of Nineties well-known imagery such as “Well Basically Basuco is Coke Mixed with Kerosine” and “Me Kissing Vinoodh (Passionately)” as well as fashion ad campaigns of the likes of the 1999 Balenciaga “Roos and Anne Catherine” and the more recent Louis Vuitton by Virgil Abloh campaign “Anyieth as the Statue of Liberty.”

Flanking these, a large screen staged in one of the rooms broadcast two videos about the photographers’ work. A 20-minute clip traces their 30-year career and expansive body of work.

“It shows our [work] in a more personal way. It has photos that we took with our iPhones of our son or of the flowers in our house, mixed with work we’ve done such as campaigns or editorials, work that has been shown in galleries only, and our videos for people like Rihanna, Kanye West and Paul McCartney or for Saint Laurent. It’s kind of a retrospective exhibition in 20 minutes,” says van Lamsweerde. 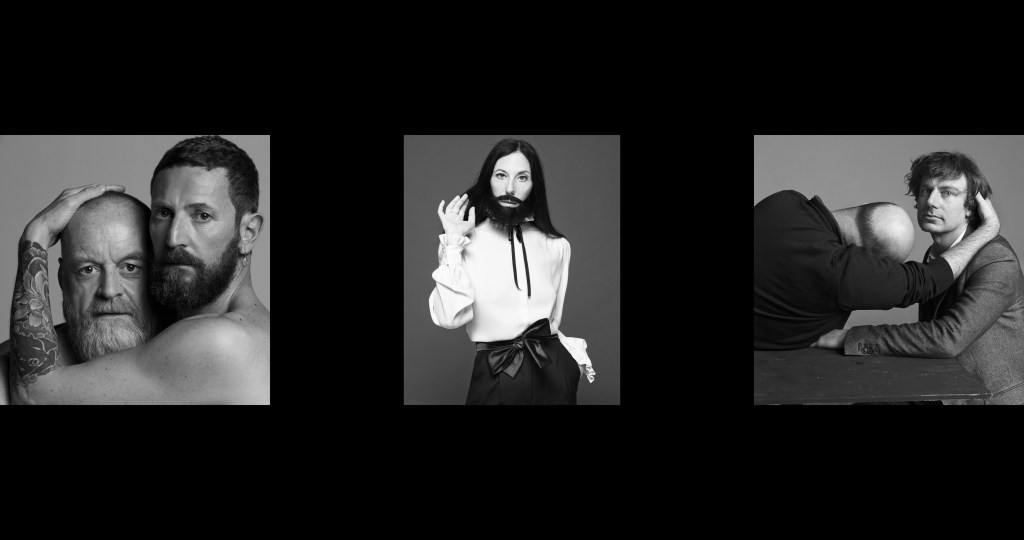 Another, 26-minute video represents a new project dubbed “I See You in Everything” that the duo is showing for the first time.

Marking the “exciting and first exploration into directing dialogues,” the photographers offered reinterpretations of existing movie scripts directing young model and actress Rianne van Rompaey. “We embarked on a three-day shooting, 10 different scenes from 10 iconic movies that in our mind all deal with the fact that we as humans are constantly trying to connect to one another but we’re mostly failing,” says van Lamsweerde. Movie scenes revisited range from “Annie Hall” and “The Witches of Eastwick” to “Kill Bill: Vol. 1” and “Waking Life.”

“Inez & Vinoodh Hi-Lo Transformers” will be the kick-off exhibit of the fourth edition of the Photo Vogue Festival, running Nov. 14 to Nov. 17.

Debuting in 2016 as a platform to celebrate the art of photography and to offer emerging talents a chance to showcase their portfolios and connect with established figures of the photo industry, this edition will feature a rich program of free public initiatives and events, which for the first time will span across the entire year.

In addition to the showcase at Palazzo Reale, the festival will offer four-day exhibits taking place at industrial space Base Milano, which is a former locomotive manufacturing plant located near the Giorgio Armani headquarters and Silos exhibition space on Via Bergognone.

The “A Glitch in the System, deconstructing stereotypes” exhibit will display the images of 30 international emerging photographers who submitted their pictures to Vogue Italia’s web site’s scouting program. These were selected by a jury that included Gucci’s creative director Alessandro Michele, Vogue Italia editor in chief Emanuele Farneti, Vogue Italia creative director Ferdinando Verderi and Lotta Volkova, among others. 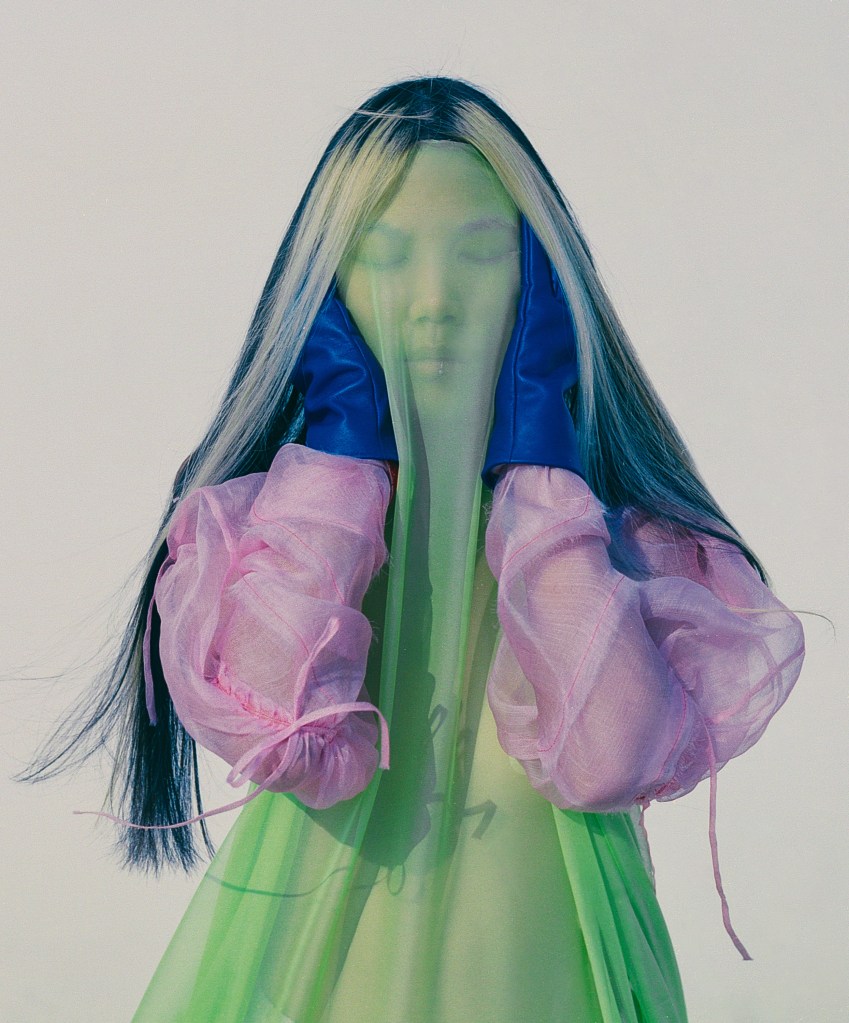 In sync with last year’s theme “Embracing Diversity,” this edition aims to continue the exploration and promotion of diversity in all its forms, extending the concept from the subjects in the images to also include the stories of those behind the camera.

Also staged at Base Milano, “Fashion Moving Forward” focuses on the video medium as it showcases the work of 26 fashion and documentary directors, including Bruno Aveillan, Floria Sigismondi, Pierre Debusschere and Sølve Sundsbø.

In addition, the location will house photography-related talks for the duration of the festival and, on Nov. 16, a group of emerging photographers selected by Vogue Italia will have the chance to show their portfolios to experts.

Related events will include a partnership between the glossy publication and Diesel, which tapped photographer Mattia Balsamini to reinterpret seven archival items of the brand. The images will be displayed at the Diesel flagship in the city’s center.

Other galleries will also stage themed shows, spanning from Antonio Marras’ space Nonostante Marras that will host an exhibit on photographer Kenta Cobayashi to “Rankin: From Portraiture to Fashion” mounted at the 29 Arts in Progress gallery. Marina Abramovic and her “The Kitchen: Homage to Saint Therese” video installations will run till Dec. 31 at the Milanese Cripta San Sepolcro crypt, while Chanel will celebrate its longtime partnership with Jean-Paul Goude with the “In Goude We Trust!” exhibit running Nov. 15 to Dec. 31 at the Palazzo Giureconsulti location.