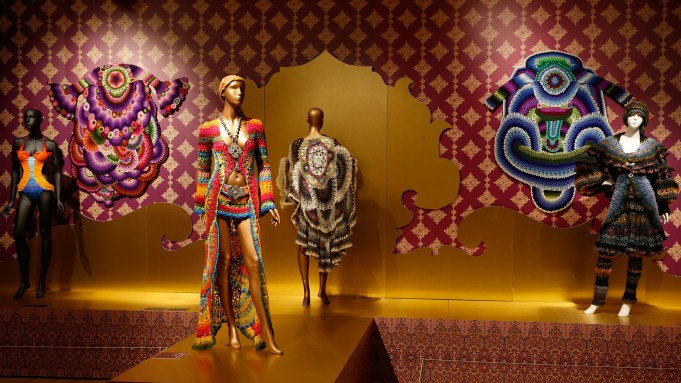 “Not to get too groovy about it, but this is just a project that has so much intuitive energy around it,” says curator Michael Cepress from the fourth floor of the Museum of Arts and Design in Manhattan. “There’s just a lot of goodness around it.”

“Too groovy” might not be a bad thing for his subject matter; Cepress is discussing his “passion project,” the exhibition “Counter-Couture: Handmade Fashion in Counterculture” at MAD, which opened Thursday. The show, which originated in 2015 at the Bellevue Arts Museum in Seattle, is a travel in time through the fashions that defined the Sixties and Seventies and that grew out of the period’s cultural movement.

The exhibit, which was brought to MAD by the museum’s chief curator Shannon Stratton, includes performance pieces like a dress worn by Mama Cass Elliot of The Mamas & the Papas or an outfit folk singer John Sebastian wore to Woodstock; a couture section, which is not “actual European couture” but rather designs made by people who “ended up evolving to that level,” says Cepress, and a sampling of entries from Levi’s denim art contest, to name a few.

“This is an antifashion moment in so many ways, that a style was born out of,” Cepress says. “So these are, by and large, artists in so many ways that had no interest in really commercializing their work. But what’s so cool is that lots of these were 19- [or] 20-year-old kids.”

Cepress, who has taught fashion design and fiber arts and textiles at the University of Washington for the past 11 years, has spent the past 15 years collecting pieces for the show. “It’s a totally personal passion project for me,” he admits. “And little by little, by way of discovering a book called ‘Native Funk and Flash’ [by Alexandra Jacopetti], I realized that so many of these clothes are around, but they’re not in the spotlight where they need to be. In putting the show together, essentially what I was trying to do was to give a taste, to give the best example of a certain part of that aesthetic from this period. The look of these clothes is so much about freedom.”

The show is meant to highlight “people liberating themselves” through clothing, an example of which is the “orgasm jean skirt.” “This embroidery along the hem of this skirt — Alexandra Hart, who made it, was making love to her husband, and in the midst of her climax, had this vision of this blossoming, swirling shape,” Cepress says. “And as soon as they were done, she raced to needle and thread and re-created it on the hem of this skirt.”(Presumably getting dressed first but, then, it was the Flower Child era, so who knows?)

The personal expression is directly tied into what was happening politically at the time these designers were creating. “The show is absolutely about art, it’s absolutely about design, but it’s about how those things tell the bigger story of an entire cultural movement,” Cepress says. “This period is so cool, because I think it closes the gap between ordinary people and fashion and style, which sometimes seems like this far-off distant thing. Even if they were [fashion designers], they were ordinary people who were living their lives, and this was about creating an entire lifestyle that happened to be about clothes in a big way, but that was about the full experience of your politics, your spirituality, your sexuality, everything about you, kind of coming together around dress.”

MAD’s Barbara Paris Gifford agrees. “There’s a nice sort of — unfortunately — resonance with a lot of issues that we’re being faced with now,” she says. “It’s to make those kinds of connections, and see what the role of fashion plays in self-identity, in advocating for a bigger self.”

The show also might just be inspiration for those who made their first protest appearances at the Women’s March on Washington in January.

“This show, it’s like it’s a lesson book for what we can do now,” Cepress says. “Imagine what would happen if everyone got rid of that really predictable side of their lives, and started to really use clothes as a way to not just express yourself but nurture yourself.”