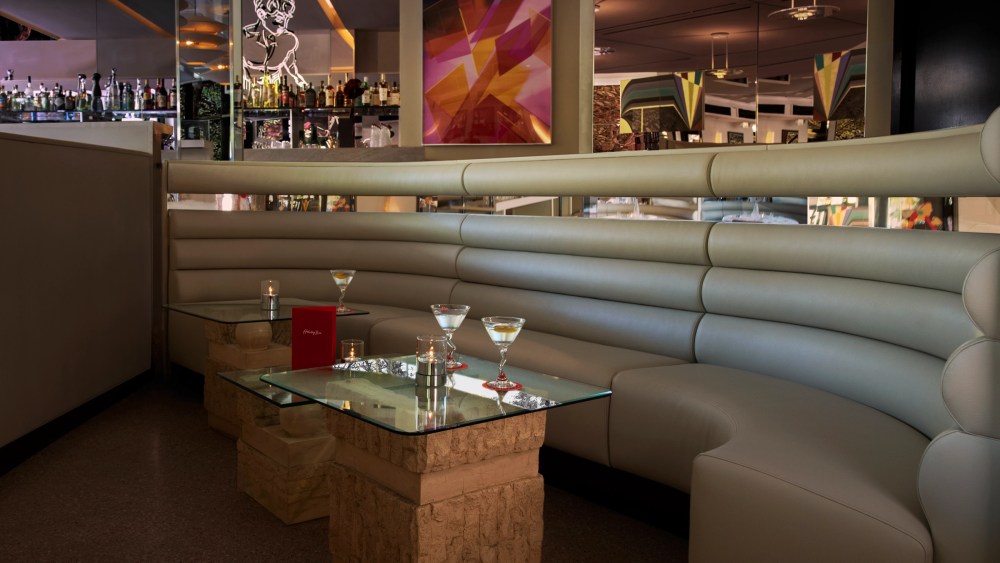 Ahead of its official debut on Friday, Holiday Bar was already the new see-and-be-seen haunt of choice for downtown. The West Village seafood-centric restaurant is the latest opening from Kyle Hotchkiss Carone’s Grand Tour Hospitality group, and promises to be just as buzzy. In the last few years, he’s opened the ever-busy American Bar and Saint Theo’s, both veritable hot spots in the neighborhood.

The culinary focus at Holiday Bar is seafood without geographical constraints, a concept that solidified during a research trip to London. Originally setting out to open a traditional seafood restaurant downtown, the team soon realized that approach didn’t reflect how the climate of dining in New York has recently shifted.

“What we’re seeing so much in New York is that people want their dinner to be their night [out]. And so I think it’s a little staid to bring that formality here,” Carone says. “We were like, OK, so how do we twist it up to make it different?”

“That was how we got to the name ‘Holiday Bar,’” adds Carone. “Imagine you’re on holiday in any of these places: you’re on an island in Greece, you’re in the south of France, you’re in Italy, you’re in Goa, you’re in Rio, you’re in Dakar, you’re in South Africa. What does it look like when you throw that all together and you combine all these seafood cultures that revolve around the seas that surround them?”

The menu is led by chefs Dina Fan and Marc Howard, who bring their collective strengths to the table. Dishes include oysters with ponzu and tuna tostada with chimichurri; fried porgy with papaya, jerk chicken, squid pasta and a dedicated sushi menu. The Holiday maki riffs on surf ’n’ turf with American wagyu and Maine lobster.

The international culinary focus is reflected in the beverage program designed by Simon Sebbah, with a wine list that spans regions like Lebanon and China alongside France, Italy and California. There’s also a focused sake program to accompany the sushi selections, and cocktails including several martini options.

With the menu in safe hands, Carone turned his attention to the design. The dining room features a pink terrazzo floor inspired by Peggy Guggenheim’s residence in Venice, and a suite of five Alex Katz prints, “Pas de Deux,” shaped the team’s aesthetic approach for the rest of the room.

Carone was inspired by fictional spaces including the Babylon Club from “Scarface” and the Cell Block nightclub in “Cocktail,” as well as shuttered nightlife spots like Paradise Garage. Leaning into a vintage and cinematic (but not film set-y) ’80s vibe, the space features vintage Ikea sconces, taupe banquettes — optimal for large and lively groups, the restaurant’s bread-and-butter — with chrome accents and large mirrored surfaces. The plates are vintage and Memphis-style, sourced from Etsy, paired with Ann Demeulemeester glassware. The fashion inspiration continues to the bathroom, where a recent Louis Vuitton runway show screens on a small video screen.

For the bar’s central art piece, Carone turned to Fotis Evans, a friend and London-based artist who created a neon installation of Narcissus. The pink-hued piece was inspired by the famous neon sign at Paradise Garage. This is a Holiday Bar Narcissus, though: the figure is shirtless and encapsulates a “Saturday Night Fever” mentality.

“It’s a fun thing that embodied the vibe that we were going for,” Carone adds. “What we want people to feel when they’re standing at the bar or looking out at the dining room; you remember it, and it’s seared into your memory.”