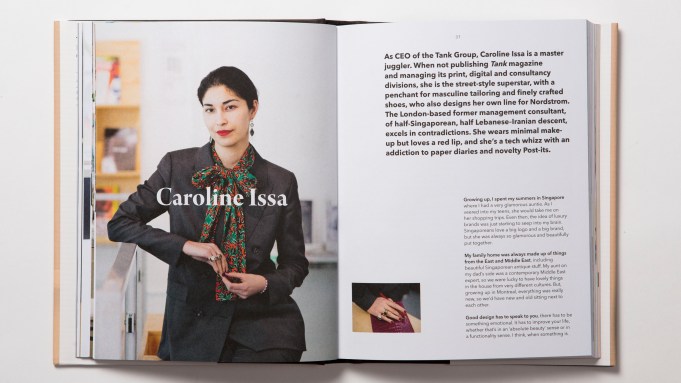 London-based fashion blogger Navaz Batliwalla is on the search for the modern gentlewoman. Tapping the likes of Caroline Issa, Bella Freud, Chloe Lonsdale of Mih Jeans and Laurence Dacade, Batliwalla has released “The New Garconne,” equal parts a photo journal and interviews with various women she finds fit this mold.

“Women have become much more interested in comfort and clothing that really works hard,” Batliwalla says. “I think it’s particularly interesting to have so many female designers heading up design houses right now. Our lives demand clothes that can live up to a 24-hour lifestyle, from the gym to work to coffee-shop meetings to evening cocktails — and female designers get that.”

Batliwalla went on to say that this demand has produced a popularity of less constrictive dressing — often found in menswear. “Masculine clothing is rooted in functionality, whereas women’s wear was always more decorative,” she says. “That’s completely changing now and explains the gender-neutral movement. Our traditional gender roles are converging, our work and home lives are converging and fashion has to reflect that. Is individual style more prevalent than trends? If there’s one thing street style and blogging have done, they’ve given people the confidence to experiment more.”

Here, WWD talks with Batliwalla about “The New Garconne,” out now.

WWD: How did you choose the women in the book?

Navaz Batliwalla: The women on my original wish list were creative, entrepreneurial women whose style and values I was drawn to whether I’d met them or admired them from afar. They were all over the globe, some well known, some only known to industry insiders.

For example, Bella Freud is an interesting designer as she has been around a long time, but most only know her from her cult sweaters and candles. But there’s so much more depth and intelligence to her than just that. She is a great example of the embodiment of a “gentlewoman,” with the dualities of masculine and feminine style, a knack of mixing luxury and utility, an appreciation for culture, craft and history, yet [she’s an] innovative thinker.

I had met Bella a few times as a fashion writer and through my blog, Disneyrollergirl, but Kris Kim of La Garçonne was completely the opposite. Her brand is amazing yet she’s quite elusive and enigmatic. She was almost impossible to pin down — I had to be extremely persistent and that annoying person who won’t take no for an answer! Although I had my hit list, I also wanted an unexpected rogue element so a few of the women were recommended by trusted friends. There’s a danger of becoming formulaic with this sort of book [because] I wanted the “gentlewomen” to have some common traits, yet not to become a cliché.

WWD: Aside from them, who are other industry figures whom you think define the new garconne? Who are some celebrities who do?

N.B.: Tilda Swinton, Janelle Monáe and Stella Tennant are the main celebrities who come to mind. They have a definitive boyish look but are absolutely feminine at the same time. They’re independently minded and portray a quiet confidence and power that is very appealing. Phoebe Philo, Ines de la Fressange, Sofia Coppola and Tiffany’s Francesca Amfitheatrof are some of the others I would have loved to include. Again, they have that masculine-feminine mix that loves sensuality, yet appreciates the functional elements that come from men’s wear style.

WWD: In addition to style, what are some lifestyle elements that make up the new garconne?

N.B.: One of the key things they have in common is a quiet power. They are great communicators and collaborators, they’re creative and entrepreneurial but they have an understated, measured approach to getting their way. You don’t have to be a ball-breaker. They’re also conscious consumers. They’re not anticonsumption; they love being surrounded by beautiful objects, but they’re choosy about it. It’s not about buying endless Louboutins because it’s the “It” item, it’s about having the best or most meaningful version of something, whether it’s a Muji pen or their father’s watch.

WWD: What made you want to put together the book?

N.B.: It was the kind of book I thought I would love to read. We live in a world of tastemakers, but often what they portray is superficial and everyone is being paid to endorse something. I’ve been working in the blogging industry for nearly 10 years so I can see we’re becoming fatigued with the insincere Instagram-ification of fashion. We’re still nosy, we want to understand how discerning people make their choices but we want to go deeper. How do they conduct their businesses and their lives? What are their personal values? And what does their desk or house look like without the stylized props and Facetune filters?