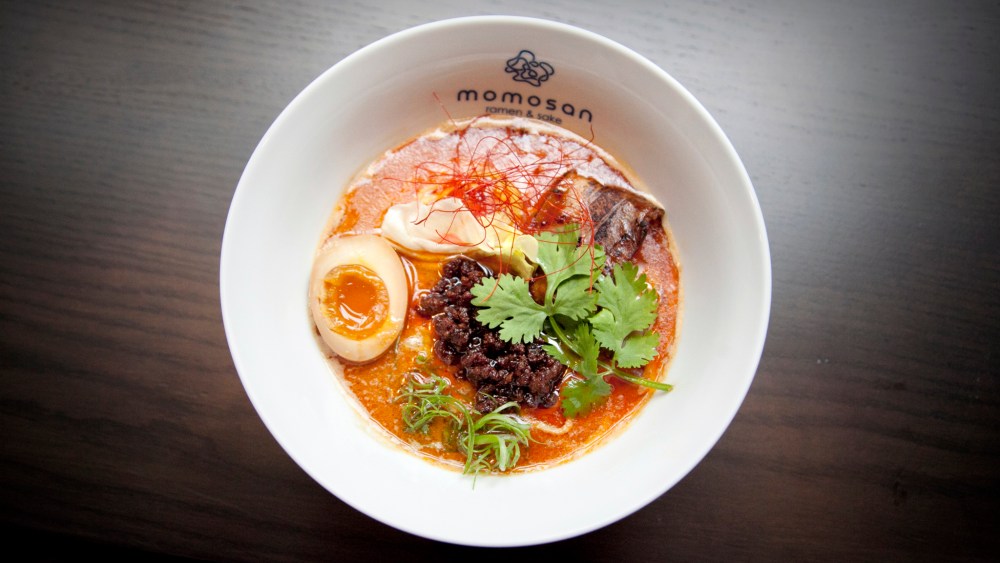 While New Yorkers’ fascination with ramen has intensified in the last few years, it’s hard to know if the demand has reached its fever pitch. Are New Yorkers ready to move on to the next food fad?

Chef Masaharu Morimoto is betting not. Besides, he has fanfare to fall back on: he’s done stints on television as the “Iron Chef” for both the original Japanese show and the American spin-off. Opening Friday, Momosan Ramen & Sake marks his foray into the realm of ramen-based restaurants.

“I started looking for new things,” the chef explained of tackling the culinary genre. “It looks like a ramen movement in this country and this town…ramen is getting bigger and bigger.”

The menu at Momosan — also Morimoto’s nickname — is focused on traditional chicken and the very-slurpable tonkotsu ramen. And pork in all forms. “We have all the pork: pork ear, pork shoulder, pork feet, pork belly, pork bones,” Morimoto ticked off. “People keep saying ramen is not healthy, and oh because it’s salty, and fatty, and has a lot of calories in it,” he continued. “My 30 years of experience in this country, people like the spicier, the richer [dishes].”

He wanted the space to reflect the casual vibe of traditional ramen restaurants in Japan, and passed the reins to design firm Vertical Space. “We didn’t discuss much, only [the] outside,” said Morimoto. “I said make cheaper. Because, ramen!” The space is airy and calm, with white brick walls, wooden elements and vaulted ceilings. A row of sake bottles lines the wall behind the bar — the restaurant features sixteen different varieties, six of which are Morimoto’s eponymous brand.

The restaurant is located a few blocks from Grand Central, and its location marks a certain homecoming for Morimoto.

“When I came to this country in 1985, just across the street, Ivy Nails, that used to be a sushi restaurant,” Morimoto explained, looking out the window at the nondescript nail salon. ‘That was my first year. I started working in the restaurant there.” While it might not be the trendiest area of town, Morimoto is able to sell the appeal. “Nice size, in a nice location. This is two blocks away from Grand Central, and this is kind of a business area,” he explained. “Have lunch, and then happy hour. Then people can go back home from Grand Central.”

Rinse and repeat, and he’ll have a successful addition to his international food and beverage empire.