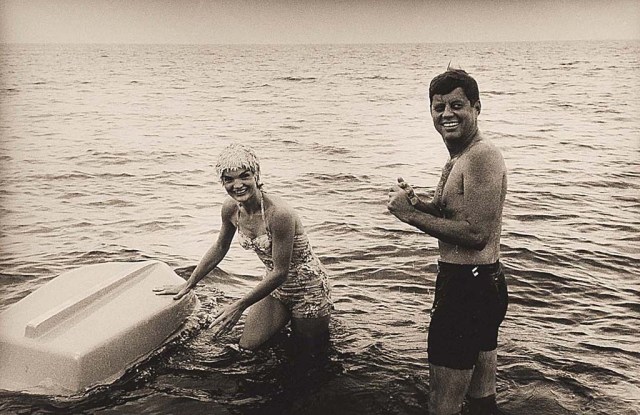 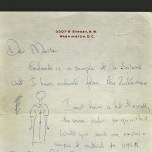 The letters are being auctioned off in the Rockwellian town of Amesbury, Mass., where McInnis Auctioneers’ appraiser Dan Meader has been poring over every letter as well as scores of other Kennedy-related memorabilia for the Nov. 22 to 24 Legends Auction. Timed for the 50th anniversary of the Kennedy assassination, the sale’s 1,590 lots include a copy of the Warren Commission Report signed by all its members, one of John F. Kennedy’s rocking chairs, a Felix de Weldon bust of the former president and yet-to-be-released family snapshots.

The former first lady’s handwritten notes are expected to be among the major draws, according to Meader. Some of them were listed with an estimate of $15,000 to $25,000 in the catalogue for Sotheby’s 1998 “Nothing to Wear” sale, but they did not find a buyer, according to Sotheby’s auction records. According to Meader, they were withdrawn from the sale and never went up for bid. McInnis acquired the letters as well as a few more from O’Connor’s relatives once they had straightened out a family dispute about ownership — what Meader described as a common occurrence in his line of work.

During a preview of the Legends sale, McInnis, who is also known as the Travel Channel’s authenticator on “DigFellas,” was reluctant to give any estimates, insisting, “I’m a preservationist at heart. I love what the JFK Library does and what it stands for. I’m doing this to give these things a new life.”

The sale also includes a well-worn cashmere blazer that belonged to JFK, several fairly battered pairs of his wife’s shoes, Hy Peskin’s negatives from a 1953 Life magazine shoot, five sketches said to be by Oleg Cassini and 55 framed, signed photographs by Jacques Lowe. More obscure items in the upcoming auction include velvet slippers that belonged to JFK’s brother-in-law Peter Lawford as well as his office’s Rat Pack-heavy phone log. There is also a stack of invoices for custom-made swim trunks for Kennedy, Frank Sinatra, Lawford and others (with their respective measurements included) made by the Hawaii-based M.Nii surfwear maker. Those seemed to have been set aside at some point, since another item up for auction is a letter from M.Nii to Lawford asking about a two-year outstanding bill for the swimwear, which includes the line, “Are you paying for President Kennedy’s shorts?”

In total, McInnis relied on 30 resources for all of the lots. The Jackie letters are the most revealing, though. In November 1960, the then-senator’s wife informed O’Connor, “You may not know this yet but I have decided to get nearly all my clothes through Bergdorf Goodman. Please keep this confidential until I announce it myself. It would simplify things for me enormously if, once I have chosen my dresses, I could send you sketches, samples, as I am doing today — then you could choose the hats, gloves and in some cases, bags. Can I sort of use you as a personal shopper there or should I write to someone else? If so, who?”

A memo from Bergdorf’s former executive vice president Leonard Hankin will also go under the gavel. In that document, the store’s president Andrew Goodman confirmed that Mrs. Kennedy had requested the store’s present designs for the inaugural gown and had submitted her own suggestions concerning the style, color and fabric. “Mr. Goodman said that the store would make no detailed descriptions or announcements about the clothes being made,” the memo reads.

In another one of the first lady’s letters that was penned before the inauguration, Kennedy noted on the back of an envelope addressed to O’Connor, “P.S. Can you find me some hats at the downstairs hat bar — the easy to wear back of head pillboxes — as I must economize on some.” She opened the letter with, “Here goes — an order for a million hats,” and proceeded to describe 12. “Oh dear it was so pleasant when I didn’t have to wear hats! They will pauperize me + [sic] I still feel absurd in them!” she added.

While the letters will be contained to 17 of the 1,550 lots Meader is compiling, their exactitude is not lost on him. “You have to think her husband had just been made president-elect after this whole dramatic campaign. She was about to have a baby and this was what she was worrying about — her fashions,” he said. “It’s pretty incredible.”

In another letter from 1960, Kennedy wrote that she was sorry to say the shoes she had been sent “have that vamp which I don’t like.” Noting that she will get her evening shoes from Eugenia of Florence, Kennedy wrote, “Would you be good enough to send Mario the material to make the shoes in. Tell him I want them in the same model as my black faille evening pumps and impress on that rather disorganized Italian that they simply must be ready in time.”

“If you listen to what she is saying, it’s really something,” Meader said with a laugh, recalling how she advised in another letter to O’Connor requesting size 10A alligator shoes with a medium heel “pointe toe but not exaggerated — no tricky vamp business.” “She’s really got sense of humor. The letters are very personable,” he said.

Kennedy also sought out pre-inaugural advice, asking O’Connor to check with Diana Vreeland at Harper’s Bazaar for a fabric suggestion for a hat to wear with a fawn-colored Ben Zuckerman coat. In another, she requested a beret “ — the ordinary kind that children have — I just can’t find one big enough — in beige — a softish wool or cashmere material — I just want to wear it in the park when it’s raining and it must be big enough for me to tuck all my hair into — tell Halston sort of a ‘Jules & Jim’ shape but with a brim…!”