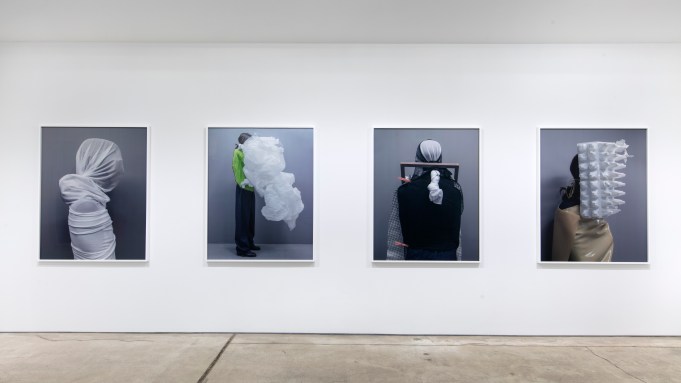 Like many artists, the pandemic has affected how photographer Jackie Nickerson works. She’s unable to travel as much as in past years, and although she’s still been shooting for clients in the U.K., the extra time has meant she’s been able to refocus her attention on her personal projects. And while the need for personal protective equipment is influencing how artists make work in collaboration, Nickerson has been mulling the impact of PPE for years. It’s an exploration that plays out in her recent series of photographs, “Field Test,” on view at Jack Shainman Gallery in New York.

Although all of the photos in the show were taken in 2019, Nickerson’s inspiration for the imagery stems to 2014. The photographer was on assignment for Time magazine in Liberia during the Ebola epidemic, and Nickerson observed firsthand the effect of head-to-toe PPE on the relationship between care workers and patients.

“I saw how PPE was affecting the relationship between care worker and patients, because the care workers were not identifiable; they were covered head to toe in masks and PPE,” says Nickerson, on the phone from the U.K. while taking a break from shooting a commercial commission. “Some people would put names on their aprons or put a photo of themselves on the masks, something that would identify them as a person.”

Nickerson views “Field Test” as an extension of her previous body of work, “Terrain,” which featured portraits of laborers in southern Africa. Like “Field Test,” those portraits obscured the faces of her subjects with materials crafted into sculptural configurations. But while she used outdoor settings in “Terrain,” the “Field Test” portraits are a little more conceptual, and shot mostly within a studio environment.

The “Field Test” photographs incorporate man-made materials that Nickerson collected over several years, much of it discarded utilitarian items like perforated packaging material, mesh fabric and bubble wrap. A field trip to Almería in southern Spain yielded large amounts of poly panda film. “I spent a couple of weeks in the sea of greenhouses there, and I collected lots of rubbish,” says Nickerson. “The whole side of the roads for miles is just hills of plastic that have been thrown out of greenhouses.”

Nickerson was interested in the duplicity of her materials, particularly the plastics, which have a suffocating quality. Panda film is used in agriculture to cut out sunlight and selectively starve certain plants so that they won’t grow. In her photographs, Nickerson drapes the material around her subjects, obscuring their bodies and covering their eyes.

“There is an inertia in the images and in quite a few of them, you’ve actually got a real human being underneath all of this material, but they don’t seem to have any will to remove themselves from it,” she says. “And I suppose in a wider political sense, you know, we’re all becoming much more complacent.”

The flip side to conversations around the environmental impact of single-use plastic is that some of them — PPE, for instance — are vital in medical fields, and often life-saving. Nickerson doesn’t offer a stance on the issue, but hopes to add nuance to the conversation through her exhibition and accompanying book, released in the fall.

“I don’t think you can just say, OK, well, plastics are terrible, then you go throw them all away. Because they’ve saved millions of lives in the last two years,” she says. “So it’s asking lots of questions about where are we going with this, and how can we keep the good stuff and figure out how to change the bad.”

The timing of the work’s release, during a pandemic, is coincidence. “I did think about maybe not putting it out at all. And then everybody was like, no, you’re crazy. You got to put it out,” says Nickerson, adding that the photographs reflect a collective trauma.

“You want to be safe, but then you start really looking at all the details. So it’s that creepiness of modern life,” she says, adding that the implications of precautions taken in the name of safety will play out down the line. “Gone are the days when you get off the plane and go down the steps and smell the smells and feel the fresh air.”

Also gone are the days of a certain preciousness about holding onto new work.

“You do work, you get it out, you move on,” says Nickerson, who’s working on a book of portraits that builds on her recent show at the National Gallery of London. “I hope people will go and see [the Jack Shainman exhibition]. I hope they get inspired by it.”