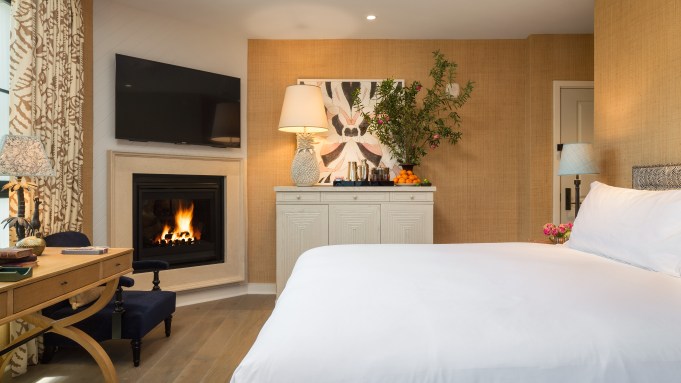 Jeff Klein has never been one to scrimp on luxury, whether it be in one of his own hotels or restaurants or when traveling elsewhere. But it was a vacation a few years back to Sicily that changed his perspective on what a “hotel” should be. “A friend had recommended this historic inn, and then told me that they didn’t have room service. I didn’t know if I could do it. I mean, what if I wanted shrimp cocktail in the middle of the night. But he said, ‘Trust me, you have to stay there.’”

Sure enough, the charm and intimacy of the place changed Klein’s perspective and planted the seed for No. 850, his newest hotel property in West Hollywood. Named for its address along a residential strip of San Vicente Boulevard, the 23-room property is a study in scaled-down luxury (and yes, there will be room service). But there’s no full-size restaurant like at its big sister, Sunset Tower. Instead, the 10,000-square-foot property, which is built onto an original California Craftsman structure on the front, features a cozy lobby lounge and one floor up, an intimate living area for hotel guests complete with a residential-style communal kitchen that is full of breakfast goodies. On the rooftop of the four-story structure, there’s a chic terrace boasting sweeping views of the city and Hollywood Hills and daily wine and mezze hours.

“I could have taken over another big hotel on Sunset Boulevard and made it cool, but this is where my heart was,” said Klein last week during No. 850’s soft opening. “I’m all about finding the heart and soul of a property and bringing out its personality. I’ll never make a ton of money on this place, but that’s not the point.”

The point that Klein is making, is why put up with the potential pitfalls of Air BnB if one is looking for a residential experience in West Hollywood? Priced above a typical apartment rental and below a Sunset Boulevard hotel, No. 850 offers the best of both worlds, plus maid service and hand-painted marbled stationery.

Together with architect Marc Appleton and London-based interior designer Rita Konig, Klein created a colorful, tranquil environment that melds the best of a chic Los Angeles residence with the comforts of luxury hospitality.

Each floor’s hallway has its own bold color scheme, and the guest rooms — ranging from roomy suites with private balconies to ground-floor rooms with private patios, are California perfection with their natural-fiber wall coverings, bleached wood floors, herringbone-upholstered beds, animalia accessories and marble baths. The common areas, too, are boldly colored and inviting.

Already some fashion folk have been staying there, not seeming to mind the last-minute construction and opening-week kinks.

And for those seeking a more rarified experience, there’s Klein’s members-only club, San Vicente Bungalows, across the street. “It’s really its own thing, but there will be some overlap among clientele,” said Klein, who gave a peek at the property, which is set to open toward the end of the year.

The cluster of original Craftsman bungalows has been gutted, with its meandering outdoor areas refreshed with new brickwork, California pepper trees, a plunge pool, and a collection of gorgeous dining rooms and bars in which members can luxuriate in, well, private membership, while enjoying fresh oysters and Champagne. There’s also an upstairs screening room set up with a piano on its small stage. “I could see Martin Scorsese giving a talk here,” said Klein.

‘It’s not meant to be a nightclub,” said Klein. “I describe it as, everything that’s great about the Beverly Hills Hotel, minus all those people.” While membership is north of Soho House and highly curated, it will mix generations “because Steven Spielberg doesn’t want to be sitting next to Steven Spielberg, he wants to be sitting next to the young up-and-comer, and vice versa,” said Klein. Ensuring the mix is just right every night will be Dimitri Dimitrov, the beloved maitre d’hôtel at Tower Bar, who will rule the roost at San Vicente Bungalows (former W editor Gabé Doppelt has taken over at Tower Bar).

For those so taken with the place that they don’t want to leave, they won’t have to: there are nine suites, each with different wallpaper and decor, that are both in the middle of the action and hidden away.