Many restaurants label themselves as "intimate" and "sustainable," but Graffiti Earth is taking those claims a step further. 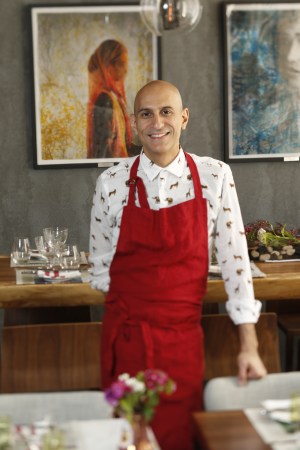 It seems as if one can’t find a new restaurant that doesn’t label itself as “intimate” and “sustainable,” but Graffiti Earth is taking those terms a step further. Led by chef Jehangir Mehta, the colorfully decorated dining room is tucked inside the sunken first floor of the Duane Street Hotel in TriBeCa, featuring only 20 seats in addition to a private dining room.

“Every table is a good table, every table is an OK table,” Mehta explains from one such table the week before opening. “I like the fact that you can have a better rapport with your customers. It’s something that has spoken to us.”

The Culinary Institute of America-trained chef worked as a pastry chef at Jean-Georges and Mercer Kitchen before opening his first restaurant, Graffiti Food & Wine Bar, in the East Village 10 years ago. It’s that restaurant — which is also very small — that prompted the hotel’s owners to recruit Mehta to open a similar annex across town. It’s not his first go at the restaurant-inside-hotel concept; he originally opened up shop in the space under Mehtaphor, which took up most of the hotel’s lobby floor. But sharing an entrance through the lobby proved troublesome; hotel guests and dining patrons competed for space. “It felt like I was at the W — you don’t know if you’re here or there, who’s the reservationist,” Mehta recalls of the confusing layout. “It felt very torn in that aspect.”

Mehta and the hotel’s team downsized the restaurant space — in this case, a positive change — put in a separate entrance for the restaurant, and rebranded under the Graffiti name.

The menu for the new restaurant, much like that of the original iteration, is eclectic. “It has influences from all over. A good amount of influences are from my Persian background, and then from different parts of Asia…it has influences from everywhere,” he explains. Mehta amps up focus on plant-based cuisine and incorporates underutilized fish varieties in addition to sourcing from sustainable water ecosystems.

The vibrant dining room features many very personal design details — the plates and silverware were culled from Mehta’s family collection, as were the two larger wooden dining tables. The decor that isn’t salvaged is likely to be recycled: the napkins are made from scrap cloth and smaller than standard size, the place mats are pages from leftover newspapers, and many of the glasses were made from old wine bottles. “We want to take sustainability to another level,” Mehta remarks.

He’s also looking to give back: The chef is working on agricultural education initiatives alongside schools, and the artwork displayed on the restaurant’s walls was created by an artist who donates 90 percent of the sale price to charities benefiting women and children.

And if you’re looking for a free meal, you may just find it at Graffiti Earth. The communal table and close quarters of the dining room lend itself to creating quick rapport among diners, and Mehta notes that it’s not uncommon for diners to pick up the tab for their new acquaintances. “I’ve worked in many restaurants and I’ve never seen restaurants where people will buy things for others,” he says. “Here, people just become friendly with each other.”