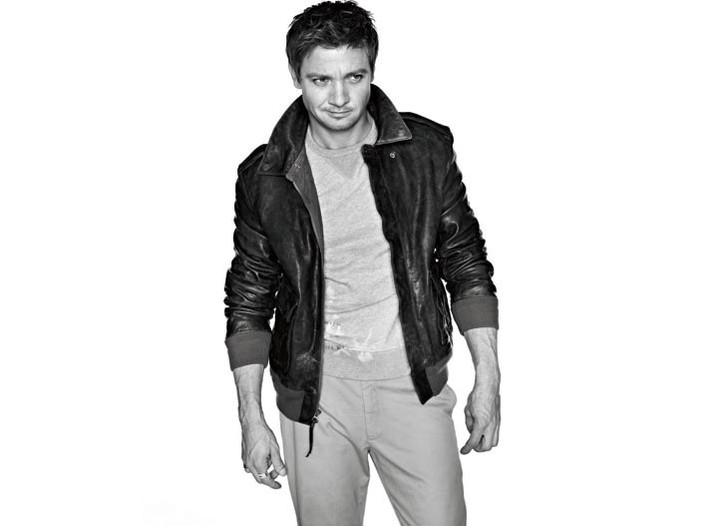 Don’t let his laid-back, down-home, “I’m just a dude” ’tude fool you. Though Jeremy Renner arrives at a recent photo shoot in Los Angeles wearing worn-in gray jeans, a Led Zeppelin T-shirt and a playful, boyish grin to match, put the man in a Dior Homme suit (“fits like a glove off the rack”) and the 39-year-old transforms into your childhood best friend who, oh, just happens to be an Oscar-nominated movie star. This dude likes his Guinness with a side of Armani.

“Oh, that’s it?” he says, the disappointment evident in his voice, when the photographer snaps his last shot.

That’s not to say that Renner has gone completely fancy since the Academy Awards, where he was nominated in the best actor category for his leading role in The Hurt Locker. His daily uniform still consists of beat-up boots (an old pair from Amsterdam), a T-shirt and jeans, these days usually by Paige.

“Style to me is something that represents your personality. If you look at any of the photos [from awards season], I have an H&M shirt on with, like, a Louis [Vuitton] jacket and I probably have some shoes from Aldo,” says the actor. “When it comes to fashion, I don’t like things where it looks like you really tried.” The same could be said of his on-screen appeal. Whatever considerable effort lies behind the characters he has tackled—from serial killer Jeffrey Dahmer to the villainous Bobby Sharp in North Country—the end result is always seamlessly realized and recognizably human. Though often something of a loose cannon.

His latest role, in the Ben Affleck–directed The Town, is no exception. Based on the novel Prince of Thieves, the film, which opens in September and also stars Jon Hamm, Rebecca Hall and Blake Lively, focuses on a group of professional bank robbers from Charlestown, Mass. (Though fictional, the story has a basis in fact, as many bank robberies in Boston each year originate in Charlestown.) Affleck is Doug, a criminal with a sensitive side, while Renner is his best friend and foil, Jem, who’s working through some anger and violence issues.

“There’s something I’ve always been attracted to in wild card characters, and Jem definitely fits the bill for that,” he explains. “You just don’t know what’s going to happen when you see this guy on the screen, and I think that’s a really exciting kind of character to play.”

To prepare, Renner met with some real Charlestown vagrants—most in prison—to help him key into Jem’s refusal to go straight.

“I don’t think he has the capabilities or really the will to find the way out. He’s not really an expansive-mind kind of guy. He’s just nose to the grind, does what he does and does it well,” says Renner, whose Modesto, Calif., upbringing also helped his understanding of the part. “My small town of Modesto, most people stayed there and made babies. There’s not a lot of great jobs out there. So you’re resigned to the small-town, raising-a-family life, which is fantastic. Myself, I left and went to a big city and pursued a big dream of being an actor. And I didn’t look back.”

The eldest of five children, Renner didn’t always have movie-star ambitions. His parents worked at the local McHenry bowling alley until he was eight, when they divorced and his mom moved just across the street and became a bookkeeper for Foster Farms Dairy. He describes his hometown as “a great kind of Middle America–feeling small town,” where he spent his high school years earning good grades, playing soccer and baseball and running track and jamming out with friends in a band, first on drums and then moving on to songwriting, which he still does (“I think eventually I’ll probably start to get really serious about recording,” he says).

“[I always had] the drive to do,” recalls Renner, who, as a kid, consistently had a job, from operating a paper route to washing cars. “I just kind of had that drive to work to do things I wanted to do. I’ve always had a will to be curious.” This extended to his time at junior college, where he studied, variously, computer science and criminology, ending up with a double major in theater and psychology. And it was there he discovered acting.

“I took this elective and it was an acting class, and then it was all over from there. And it wasn’t even a question,” says Renner. “In reflection, it was being able to hide in a character and explore all these feelings that I was personally having at the time that I wasn’t able to explore comfortably in myself.…It became a really kind of lovely playground for me, the stage. And then it became about the artistry of it, once I started purging all these feelings.”

But artistry doesn’t always pay the bills, a fact that explains the seemingly limitless vocational skills that have kept Renner comfortable over the years. To earn extra cash, he’s worked in fancy resorts in Maui and even as a makeup artist, a stint that started at a Modesto mall Lancôme counter and carried over to his early time in Los Angeles. He says he took the job because he enjoys painting (“a great way to hit on chicks”).

Even now, after his breakout role in The Hurt Locker, he runs a house-flipping business with one of his best friends, fellow actor Kristoffer Ryan Winters, that, over the past 10 years, has had them buying, moving into, renovating and then selling 15 homes in the Hollywood Hills area.

“This acting thing doesn’t pay. We make money in real estate. And that affords me, as an actor, to not have to take things because I need money,” explains Renner. He currently is living in a 7,000-square-foot house that once belonged to Preston Sturges. “I call it f–k-you money. ‘No, I don’t need your goddamned movie; f–k you, I’ll go build another house with my brother.’ I love saying f–k you, too.”

Aside from keeping him in the green, Renner’s real estate endeavors also have kept him grounded. During awards season earlier this year, his midconstruction digs threw a comical wrench into his routine.

“I was brushing my teeth in Starbucks because we didn’t have any plumbing,” he says. “I remember sleeping under painter’s plastic because it was so dusty. I had to create this tent, like Bubble Boy, around my bed. I had to put holes in it so I could breathe. It’s kind of pathetic.”

Or as real as it gets. Though the “I’m not changed by fame” refrain can sound pretty lame coming from other actors, in Renner’s delivery, it sounds believable.

“The fight is still the fight. The struggle is still the struggle. Two of the movies that I really wanted to do fell through and are not going to happen,” he says. “So now I’m sitting here, unemployed, smoking a cigarette with a cup of coffee in a dusty house.”

That is, until he plays his next wild card.