Jets Walk the Walk at Taste of the NFL 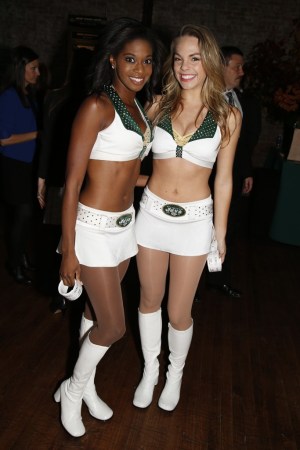 The New York Jets used their bye week to walk the catwalk.

On Monday night, center Nick Mangold and defensive lineman Muhammad Wilkerson hosted a revamped Taste of the NFL event at 82Mercer in Manhattan’s SoHo neighborhood. Usually held in the off-season, the 10th annual edition, which is a fund-raiser for local food banks in the New York/New Jersey area, was moved to midseason and for the first time included a fashion show with Saks Fifth Avenue. Several of the players were dressed head to toe in tailored clothing from the Saks Fifth Avenue Men’s Collection and showed off their duds during a jaunt down a runway during the event. Most of the players, including Willie Colon, Demario Davis, Stephen Hill and Austin Howard, took their runway duties seriously, but placekicker Nick Folk gave a high kick as he hit the end of the runway.

“Saks Fifth Avenue put together a great collection for us,” Mangold said. “And the players are enjoying it. For guys who don’t usually dress up in suits, to dress up in suits is fun. I like to see the guys get out of their comfort zone.”

Many of the players sported made-to-measure styles in classic men’s wear patterns such as blue pinstripes or solid charcoal gray. “Folks of our size don’t buy off-the-rack,” Mangold said, adding that his “ideal playing weight” is 310 pounds.

“We’ve been involved for five years,” said Tom Ott, senior vice president and general merchandise manager of men’s for Saks Inc. “We like the relationship because it gives us an opportunity to dress these guys and see how good they can look when they’re actually fit correctly.” In addition, the exposure is a great marketing opportunity for the SFAMC brand. “They help show that it’s not so classic and can be good for young men as well.”

Ott said the energy was even better this year following Sunday’s surprise win over the New Orleans Saints. “There’s a real buzz around the team,” Ott said. “They’re no longer the other football team in New York.”

As expected, talk turned to the game and the team’s hopes for a playoff spot this year.

Rookie quarterback Geno Smith credited his teammates for doing a “phenomenal job going out and competing against the Saints, one of the best teams in the league. It shows a lot of resiliency and puts us in a good position down the stretch,” he said. Although four of the team’s remaining seven games are on the road, Smith said he’s hopeful the momentum will continue. “Going on the road will be a test, but we’re prepared and will go hard.” He said his goal for the rest of the season is to be “a lot more consistent, just play ball and have fun.”

While he has been haunted by a number of interceptions, he refuses to dwell on the negatives and strives to move on. “You have to in this league. It’s something I’m accustomed to. I know nothing in the past can effect the future. Just let it roll off your back and move on from there,” said Smith.