The film actor Jim Caviezel stars in AMC's remake of the cult classic "The Prisoner." 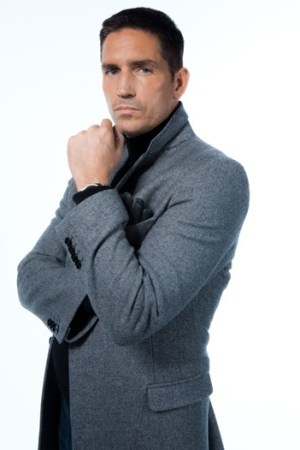 Jim Caviezel is a man of the old-school mold. Not a dude, or a skinny jeans-wearing hipster or a floppy mopped, I-don’t-wash-my-hair heartthrob, but the kind of guy who rides motorcycles (he owns a Harley and a Kawasaki), likes fast cars (current favorite is a black Lamborghini) and requests Frank Sinatra be played at a photo shoot. Not to mention that at a muscular 6 feet, 2 inches, with cheekbones that could cut diamonds and a piercing blue stare, the actor practically screams, “Don’t mess with me.”

“You’re scaring me, man,” jokes the photographer as Caviezel fixes him with an unwavering scowl.

Fortunately, Caviezel is also a huge ham. Throughout a four-hour shoot, he dances and warbles along to “The Way You Look Tonight,” practices his Spanish with the Barcelona-born photographer and coos over the clothes rack (“I was immediately drawn to this,” he says, making a beeline for a Dolce & Gabbana gray sweater and Tom Ford plaid scarf).

By the time he sits down to chat about his latest project, AMC’s television miniseries, “The Prisoner,” which premieres Sunday, he’s in full-on ramble mode.

“You’ll have to forgive me. Now I know where I’ve gotten in the habit of talking too much — I’m the one doing all the talking. You’re asking me the questions, and I’m not asking you any questions,” he says, before throwing out a few of his own.

“Let’s do the interview,” interjects his guard dog publicist.

“It is part of the interview,” he says.

“Not really,” she snaps back.

Much like his character, named Six, in “The Prisoner,” Caviezel often finds himself at odds with the strictures of his world. A remake of the 1967 cult television series of the same name, “The Prisoner” centers on Six, who wakes stranded in a desert with memories of a past life, but finds he’s trapped in a creepily idyllic locale called the Village. Overseen by the dictatorial Two (Sir Ian McKellen), it is a whitewashed version of reality in which everyone lives in identical homes, eats the same food and never questions what might lie outside their borders. Equal parts sci-fi thriller and existential meditation, the updated version explores themes of surveillance and government control.

“Whatever he does — his conscious or subconscious — that is all that he’s got. It’s the only truth he knows, and he’s going to hang onto it with everything in his mind,” explains Caviezel of the psychologically tricky part, whose Namibia and Cape Town-shoot also proved physically taxing. “I remember going to the set and you’re so mentally exhausted. Sometimes to get myself ramped up, I would take a chair and ram it into my head, going, ‘Wake up now!’”

It was a level of commitment that certainly impressed his veteran co-star.

“Jim, more than most actors, knows how to behave in front of the camera,” says McKellen, whose Two has many a head-to-head battle with Six. “I was watching that really with awe, rather than thinking, ‘Are there any notes I can give him?’”

The actors’ respective divergent backgrounds also proved to be assets in achieving their on-camera antagonism.

“The two of them had a huge respect for each other, and the characters sparred brilliantly on screen coming from the two different worlds of acting in film and theater,” says producer Trevor Hopkins.

“He’s a Catholic and I’m an atheist,” says McKellen simply. “It was very appropriate that he and I are so different in ages and nationality and belief system and experience, because we could be interested in each other easily and we could perhaps be equally suspicious of each other.”

Religion, it turns out, is one topic on which Caviezel is not chatty. When his turn in Mel Gibson’s controversial “Passion of the Christ” hit in 2004, he was very outspoken about his devout Catholicism. But today, both his current spiritual state and his family (he is married with two young children) remain off-limits.

As for his role as Jesus Christ, well, it elicits a similarly tight-lipped commentary.

“It was to me as Christopher Reeves was to Superman — I can tell you that much,” he offers. “This business has a tendency to stigmatize you. Once you do ‘The Thin Red Line’ [his critically acclaimed breakout], you can no longer do comedies, and that’s one of those things I used to do.…When I’m committed to something, what I do is I get so involved in it that people will say, ‘That’s all he does.’ It’s just not so.”

There is no better indicator of Caviezel’s versatility than his unconventional path toward acting itself. Born into a large athletic family in Mount Vernon, Wash., Caviezel always enjoyed “horsing around” with impersonations of Eddie Murphy and Michael Jackson and dabbled in a school play. But his real focus was on basketball: He spent 17 years playing, with the intention of turning pro.

“I just wasn’t good enough,” he says. While at Bellevue Community College, he injured himself and, during recovery, would entertain teammates by mimicking his coach. They encouraged him to turn his knack into an acting career. He landed a role in the play “Come Blow Your Horn” and realized such a transition wasn’t a complete non sequitur.

“Listening to those actors deliver their lines with intent, I was able to translate that to the game of basketball. Same thing: You’re on the court and your intent is to get to the pocket, and you don’t just plan a move — it happens,” he says. “It’s the tens of thousands of hours of practice until a move becomes second nature. And the same thing happens in acting.”

Many projects later — including films like “Frequency,” “Angel Eyes” and “The Count of Monte Cristo” — the analogy continues to pervade his approach. He uses a complex description of backspin to explain keying into “The Prisoner” (“When I’m looking at a screenplay and it defies physics, I look for mental math”), and sees a bad take as no different than a bad play. Even the industry receives the sports treatment.

“Here’s the main thing: The business is always going to be what it is. In basketball, there were always going to be things that I didn’t like that weren’t going to go away. All I could do was change myself,” says Caviezel. “My family is most important to me. Not this business. This business is a product by which I make money and do work, but it’s for my family. And the only frustrating thing is, like my character, you feel like you’re not adequate enough to do the very work you need to get done.”