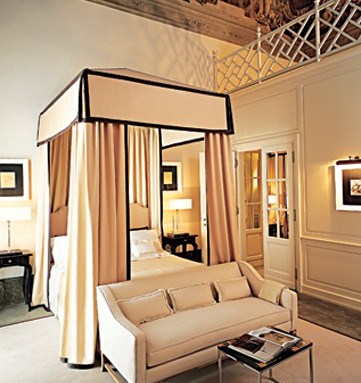 In a country where the concept of a private club is still somewhat foreign, Club Tornabuoni in Florence will be a stylish and luxurious icebreaker.

Members will be given the chance to stay in the Medicean Palazzo Tornabuoni Corsi, which overlooks tony shopping street Via Tornabuoni and is a few steps away from the Ponte Vecchio on the river Arno, the Uffizi museum and the Cathedral. The club is backed by former Calvin Klein licensee Fingen SpA and its real estate division RDM, with an investment of 110 million euros, or about $161 million.

Italy’s first private residence club will stretch an entire block between Via Tornabuoni and Via Strozzi, and comprise 36 apartments over five floors totaling about 173,000 square feet of residential space. The number of memberships is limited to 288.

“This is all about luxury lifestyle, connected to wine tasting, cooking lessons, exclusive cultural excursions, shopping and traditional craftsmanship,” says Jacopo Mazzei, chairman and chief executive officer of RDM. The apartments, furnished with top Italian brands such as Boffi kitchens, are slated to be finished in January, after three years of restoration. Artisans carefully recovered frescoes from Agostino Ciampelli, a statue of Diana by 17th-century artist Gherardo Silvani and 18th-century fireplaces with mosaics featuring animal scenes by Giacomo Raffaelli, among other challenges.

“The club is aimed at an international community,” says Mazzei. “Our target is someone who loves Italy and Florence, someone with a strong cultural base, with diverse passions and interests, who plans a continuous presence here.”

While declining to reveal names, Mazzei says membership already totals 80 and includes a scriptwriter, a number of entrepreneurs and even a Nobel Prize winner. “There is nothing bling about Club Tornabuoni. It’s about Italian luxury lifestyle, but it’s not Sardinia or Capri,” says Mazzei.

Access to private galleries, viewing of artistic restorations and cultural and oenogastronomic tours will be available through the organization, as will gardening courses or grape harvesting.

Club Tornabuoni is only the first step for RDM, which plans to extend the concept to ski and beach resorts, and to cities such as Rome and Venice. The company also is said to be developing Bulgari’s resort near Bolgheri in Tuscany and is the developer of the Four Seasons Hotel in Florence in a building it owns.