Jon and Vinny’s Opens in L.A. 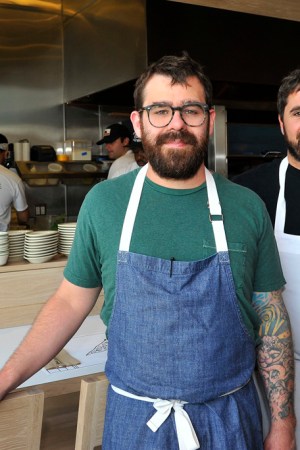 Two years after the much lamented closing of the popular late-night pizzeria Damiano’s Mr. Pizza, a new spot is opening in its place. And there are reasons to be optimistic. Two, to be more precise. The guys behind Jon & Vinny’s are Jon Shook and Vinny Dotolo, the buzzy culinary duo also known as “the Animal guys.” When they opened Animal in 2008, the meat-centric restaurant quickly became a foodie staple on bustling Fairfax Avenue, a thoroughfare anchored by the landmark deli Canter’s and packed with kosher markets and hipster skateboard shops.

Their latest venture, a 45-seat Italian-American restaurant, brings them full circle to their beloved neighborhood, where they once shared a bachelor pad and have now settled with their own families. “It reminds you of the place that, as a kid, you went to with your family after playing T-ball. Now that we both have children, this is where we’ll bring them,” Shook says.

The menu includes comforting classics like meatballs with marinara; tagliatelle Bolognese; plenty of artisanal pizzas, and soft-serve ice cream. But, Shook says, “it’s not necessarily a red-sauce place because we also take advantage of the fresh local produce.” Seasonal small plates contain a farmer’s market bounty, including a tangerine and avocado salad with spring onions, watermelon radish and fennel pollen, and a roasted beet “Greek” salad with feta, tomato and a black olive vinaigrette.

Shook and Dotolo bought the Jon & Vinny’s building in 2011, but it took several years to transform the old pizzeria into their version of Californian-Italian cool. Architect Jeff Guga installed white oak walls and banquettes, skylights and drop-leaf tables fixed to the floor (thus eliminating wobbly tabletops). In the front, a long counter faces the open kitchen; in the back, a temperature-controlled tasting room houses more than 1,000 bottles of wine curated by director of operations Helen Johannesen.

In the meantime, they opened seafood concept Son of a Gun on nearby West Third Street, partnered with celebrity chef Ludo Lefebvre to launch Trois Mec and Petit Trois, and raised their profile cooking at celeb-heavy events such as the Sundance Film Festival and Baby2Baby gala. The Animal catering business, now housed next door to Jon & Vinny’s, became a favorite on the art and fashion circuit, including private dinners for jewelers David Webb and Irene Neuwirth, perfumer Alexandra Balahoutis and gallery owners Esther Kim Varet and Anat Ebgi.

Their latest venture is the first to offer breakfast, lunch and dinner, allowing hungry fans to nosh starting at 8 a.m. on olive oil fried eggs with grilled Tuscan kale and potato hash, baked bucatini pie or a range of fresh-baked goods. Ironically, their most straightforward dining concept is also the most difficult to perfect.

“We’re not reinventing the wheel, but as a chef it’s harder with less items and less ingredients to make every dish as good as we can,” Dotolo says. Judging by the steady stream of patrons during the first two days in business, it’s a good thing that all menu items (and wines), are also available for takeout and delivery.