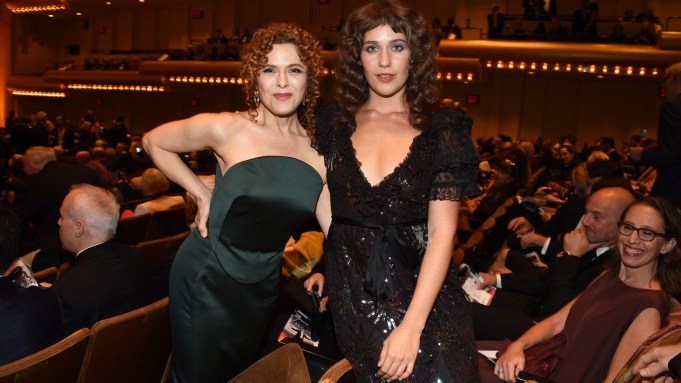 On Wednesday night at Lincoln Center, while one man in street clothes pushed his upright bass into a back entrance of David Geffen Hall, a procession of suits and ladies in gowns were making their way down the red carpet. The crowds had come out to celebrate the opening night of the New York Philharmonic, which also featured the Philharmonic debut of jazz pianist Aaron Diehl.

“I don’t think I’ve gone to the symphony for a very long time — I’m excited to be going tonight,” said Bernadette Peters, who’d come draped in an emerald Zac Posen gown. The statement wasn’t exactly true — the actress has spent time at the fictitious New York Symphony in Amazon’s “Mozart in the Jungle” series. “We were invited because Alan Gilbert was on the show,” she added before her costar Lola Kirke joined her inside the theater.

While Wednesday night’s gala performance opened the season, it also marked the beginning of the end of Gilbert’s tenure as music director of the Philharmonic; he will step down from the post in 2017.

“It’s an opportunity to say goodbye — or ‘great last season’ — to my friend Alan Gilbert,” remarked Josh Groban. “It’s not often I get to actually come to an institution like this, to celebrate one of the great institutions of the city.”

While the New York Philharmonic tends to attract an older audience, Groban recalled a memorable moment from his time attending the Interlochen Center for the Arts summer camp.

“I’ll never forget the World Youth Symphony Orchestra,” Groban said, reminiscing about when the camp’s ensemble was led by a guest conductor from the Detroit Symphony. “They did [Gustav] Holst’s ‘The Planets.’ It was absolutely incredible. I remember us going back to our cabins that night, and we had friends that were in that orchestra that were sleeping in the bunk beds, and we were like ‘Man, that flute — you crushed it on the flute tonight,’” he continued. “I’ve been to some great orchestra since then, but that one stands out.”

Before making his entrance onstage to conduct the night’s program, Gilbert also recalled a seminal experience from his youth.

“From the time I was really young, I was going to concerts because my parents were in the orchestra,” Gilbert said. “But I do remember the first concert I went to where somebody did not talk, because I’d always been to children’s concerts when they announce the pieces. Suddenly, it felt very grown up and very formal. And that was a striking moment — maybe that’s one of the reasons I like to speak very often during concerts these days.”

Based on the crowd’s reception that night, after eight seasons they are still interested in what Gilbert has to say — and are eager to hear where he will go next.