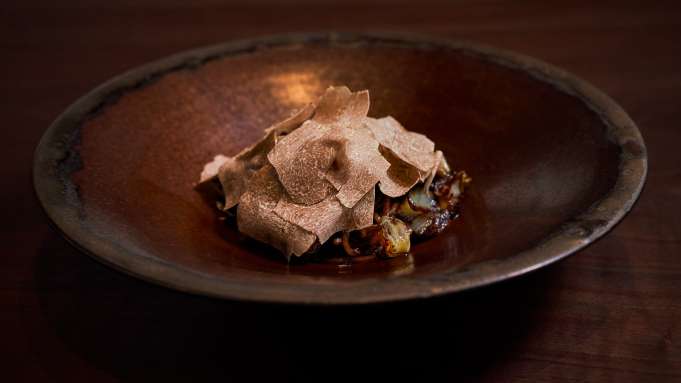 “This is a gift to my first daughter Jua Kim,” says Kim, sitting in the dining room of his first solo restaurant project, Jua, in the Flatiron District. “She was named after the French word of joie.”

His eatery, which opens soon, is a similar intermeshing of French and American influences with Korean at its core. After spending eight (“wonderful,” he stresses) years at Jungsik restaurant, where he started as a line cook and worked his way up to executive chef, Kim decided the time was right for his own project.

The restaurant is located on 22nd Street, and the chef points to the increasing culinary prestige of the Flatiron area — Eleven Madison Park, Cosme, Casa Mono — as a draw; Hand Hospitality’s Atomix and Atoboy are nearby, too, located less than 10 blocks north and run by chef Junghyun ‘JP’ Park, who Kim cooked with at Jungsik and considers one of his closest friends. Park has also become a mentor, offering guidance to opening a restaurant in New York.

“When I decided to open my own restaurant, I was worried about everything because it is a big challenge as an immigrant from a foreign country,” he says. “I didn’t know about how to own and manage a business in the United States. I needed someone who can guide me with extensive experience of launching a restaurant in New York City.”

There is safety in numbers; since its establishment in 2011, Hand Hospitality has helped expand the scope of Korean restaurants in New York City and has contributed to a renaissance of Korean cooking. Kim, who also spent time cooking in France, defines his approach as New Korean, inspired by modern American cuisine and French techniques. His primary focus at Jua is cooking with a wood-burning stove and manipulating it to give different smokiness to his dishes.

“This primitive form of cooking is the best way to get wonderful flavor in natural ingredients,” he says. “I am using two kinds of wood — cherry and oak — from upstate New York. For example, our main course is smoked duck; we dry age the duck from Long Island for two weeks, hang ducks over the ember of cherry food for one hour, very slowly cooking it takes out duck fat while adding the crispy skin, so inside is wonderful flavor, smoked duck. I love the distinctive flavor that the wood fire gives, but I have to make sure that the smoky flavor isn’t too dominant.”

The menu is structured as a six-course tasting format, which Kim chose to best showcase his style and cooking philosophy. The dishes were designed with an emphasis on balance — lightness with fatty, acidic with tart — and the way Kim sees it, tasting menus are able to offer guests a deeper connection with the chef and thus offer an opportunity to create a more experiential meal.

The dining room, which features an open kitchen was designed with the serenity of nature in mind to complement the focus on wood-fire cooking. Brick and concrete walls and metal detailing are matched with salvaged wood ceilings and wooden tables, creating a coziness that is underscored by industrial minimalism.

“It looks like a really nice cabin,” says Kim.

And this cabin that comes with the joy of not needing to cook yourself.