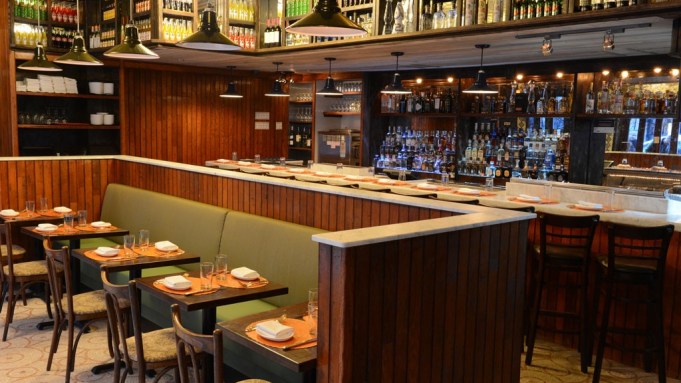 Julian Medina is not what you’d expect of a burgeoning Manhattan restaurateur on the verge of opening his latest eatery. It’s around four in the afternoon on Friday, two days before Toloache Thompson, lucky number seven in Medina’s lineup, is slated to open.

Outside, bundled-up workers polish the fogged windows spanning the length of the storefront. They’ll open out onto the street in the summer. The interiors are rustic. The floors are mosaic with chunks of inlaid stone and terra-cotta swirling around each other. Traditional Mexican Talavera tiles line much of the 3,000-square-foot space. Bottles of Mexican soda and tequila stand tall above the long marble bar.

Underneath them, Medina happily chats with partner Louis Skibar as a WWD photographer snaps away. When asked if he wants to see the shots, Medina looks up. “Oh,” he says, as if the thought hadn’t occurred to him. Quiet talk with Skibar aside, he’s been practically silent until now. “Sure.”

This is not how most restaurant walkthroughs go. Typically, the restaurateur spins around the place like an Ari Gold-esque Tasmanian devil, barking orders at workers, the stress of the imminent opening palpable.

But Medina is downright mellow. “It’s always the same,” he shrugs. “The past few weeks were a little stressful, but it always comes together.”

It’s the third Toloache (well, actually fourth, if you count Toloache Taqueria, a casual concept spot in the Financial District) for Medina. The first was opened in 2007 in Midtown Manhattan, the second opened in 2011 and is on the city’s Upper East Side. Toloache Thompson in the West Village rounds out the reach. “For the larger brand, we thought we could use something more downtown,” Medina says. His other, non-Toloache spots include Yerba Buena, Yerba Buena Perry and Coppelia.

All of his restaurants are rooted in Mexican and Latin cuisine. Medina learned to cook from his paternal lineage in Mexico City. “My father used to wake up at 5:30 every morning to cook us breakfast before we went to school, and this wasn’t just a bowl of Cheerios and a yogurt,” Medina says. “He’d squeeze fresh orange juice or grapefruit juice and make us something hot. I use to go to my grandfather’s house after school for comida, which is a late lunch, and he used to make chile rellenos or green mole with chicken. That’s where I got inspired from, my grandfather and my father.”