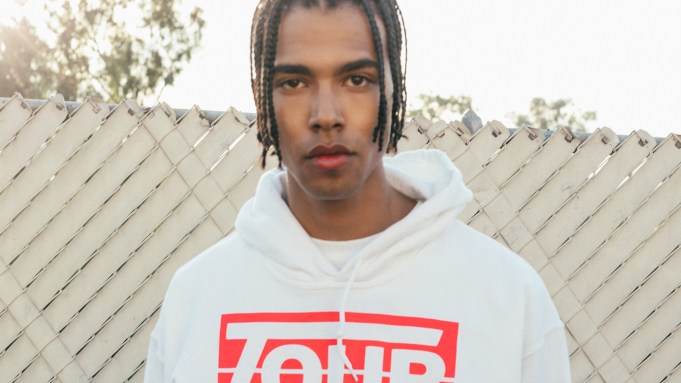 It’s been almost two years since Justin Bieber dropped “Purpose,” his fourth studio album that produced hits “What Do You Mean?” and “Sorry.” The album’s accompanying world tour came with a series of merchandise collections that quickly went viral, including a collaboration with Barneys, a VFiles pop-up collection and a more affordable line with Forever 21.

“Purpose” is the gift that keeps on giving, as Bieber has just released a look book for even more merchandise, this time in support of his summer 2017 stadium tour. Produced in partnership with Bravado, the “Purpose the Stadium Tour” collection includes T-shirts, sweatshirts, sweatpants and leggings. The words “tour,” “team,” “stadium” and “Bieber” are emblazoned on most of the offerings, which come in white, black, gray or blue.

Shot by 19-year-old photographer Samuel Trotter in Los Angeles, the look book marks the first time Bieber has released a visual component to accompany his merchandise. The collection will be available on the European and North American legs of his tour, and fans attending Pinkpop Festival in Landgraaf, Netherlands will be the first to have access to it. It will also be available on purposetourmerch.com.

Look books for merchandise collections are becoming increasingly popular. Back in February, Lady Gaga dropped a surprise look book for her Joanne World Tour. The merch was designed in collaboration with London-based creative studio Lobster Eye and Bravado, and the visuals were shot by Synchrodogs in Ukraine.

Earlier this month, The Weeknd released a look book for his Starboy 2017 limited capsule collection ahead of a series of pop-ups. The merch included T-shirts, hoodies, bombers, denim jackets, hats and more.