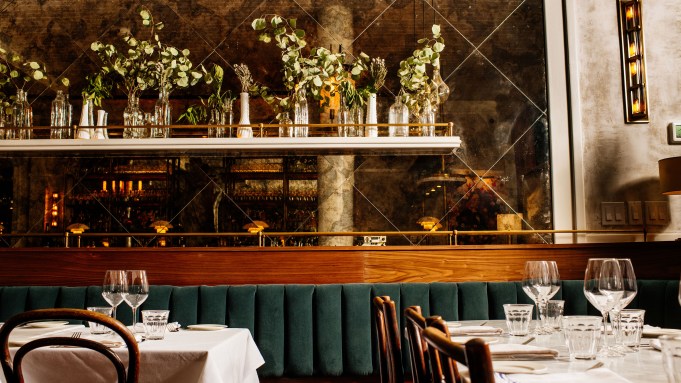 Despite its name, the French Quarter in New Orleans doesn’t have an authentic Parisian brasserie. Justin and Mia Devillier, the restaurateur couple behind La Petite Grocery and Balise Tavern, have corrected the omission with Justine, which opened in a historic, former furniture warehouse on Chartres Street earlier this week. They’re folding raw-bar towers, steak frites and French onion soup into the neighborhood’s grand palaces for creole and cajun cuisine like Brennan’s and Galatoires.

“What I like about the brasserie is the juxtaposition of hot dishes and rich sauces with light and refreshing, chilled seafood,” says Justin, a chef who draws inspiration from Paris, where he and Mia made the rounds, as well as Raoul’s in Manhattan. “Our burger’s peppercorn dipping sauce is an homage to [Raoul’s] burger au poivre, one of my favorite burgers of all time.”

The Devilliers ate and drank their way through Paris in the name of research, but spending six hours at an architectural salvage yard outside the city proved more directional. Scoring a boucherie’s pressed tin marquee decorated with bull heads dictated their concept’s stronger boeuf motif. An entire section of the menu is devoted to renditions of steak frites with different cuts and sauces — even the Moroccan-spiced short rib comes with fries.

Other vintage finds from that fortunate afternoon of picking also transform the 200-seat space — virtually a vanilla box when they got it, according to Mia — into a Parisian moment. They restored illuminated Tabac and Toilettes signs and turned a pay phone into a sound installation, whose rotating, French-themed clips are heard through the receiver. A zinc bar and café-style seating, one of several distinct dining vignettes, also had to be part of the experience.

“The first room feels like a Parisian sidewalk café, and we can open its line of original French doors facing the street on nice days to really get the effect,” says Mia, who commissioned local design firm Farouki Farouki. “It’s the first time we’ve worked with designers — we just had to from the size of this place compared to our other restaurants — but we were very hands-on, including Justin.”

“You’re traveling to France when you’re here, and wine’s a big part of France,” says wine director Jonathan Sanders, a half-Frenchman who stands by the decision.

Pastry chef Austin Breckenridge is getting a little pushback, too, for not putting a chocolate dessert on the menu. His honey vanilla pot de crème — instead of the usual chocolate — reaches far back into the annals of French cuisine. It isn’t overly sweet either.

“Yeah, we might have to give in to that one,” says Justin, mulling over chocolate profiteroles.