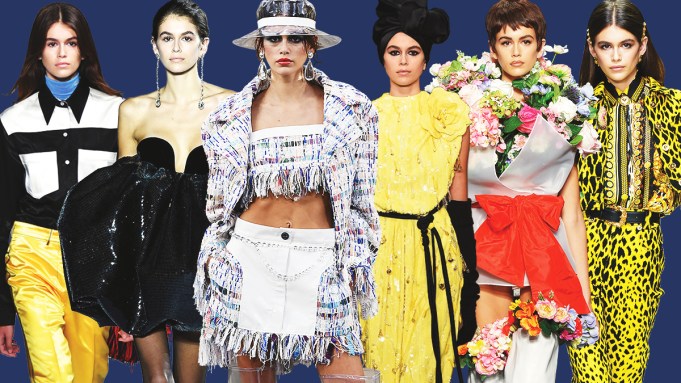 Has a new “Super” been born?

She certainly has it in her genes — literally. Kaia Gerber may be all of 16 (having celebrated that milestone over Labor Day weekend and gotten her driver’s license), but the teenager undoubtedly has been the breakout face of the spring 2018 season — debuting at Calvin Klein but then quickly following that walk with struts across Milan and Paris, ending her first season with an honor many more-famous faces would kill for: opening the Chanel show on Tuesday.

When your mother is Cindy Crawford — and your dad is Rande Gerber — the vocation comes naturally.

But more than simply pushing other high-profile faces into the background this season — Kendall Jenner, Gigi and Bella Hadid who? — Kaia Gerber’s rapid rise may signal a shift in the runway modeling world. Her success — coupled with the response to the Supers’ appearance at the Versace show in Milan (including Crawford, with her daughter), which arguably was the biggest moment of the season — marks the return of the “beautiful girl” on the runway, a look last popularized by those very same Supers.

And with many designers looking back to the Eighties and Nineties for inspiration, Gerber’s arrival may signal the launch of a new generation of “Supers.”

“I remember speaking to Kaia backstage at the resort show that I did in L.A. in June where she came to sit front row because [her brother] Presley was in the show, and she was, like, ‘I can’t wait until September, I can finally join you!’” says Jeremy Scott, who had Gerber in his Moschino show in Milan. “It’s already this crazy phenomenon that she’s this little baby doppelgänger of her mother, one of the most iconic American beauties and fashion models of all time. And she just has such a great attitude. Both her and her brother are very well brought up; they may be Malibu raised, but they have Midwestern values, obviously through Mommy, who is a Midwesterner. She also has a creative spark in her and it’s just starting to show, because this is obviously her first season and it’s really good to start working with people [at the start].”

“I don’t think Kaia is getting any of these opportunities because of her mother, [but] if she was a girl who walked off the street, she would’ve had a harder time because our business is not so accepting of really beautiful girls — and she’s really beautiful,” says casting director James Scully. “And lots of people who normally wouldn’t use a girl like her, they’re all using her. To be quite honest, Raf [Simons] wouldn’t use her. Half the shows she’s done, those people wouldn’t use her if she was just a beautiful girl off the street. I think she’s groundbreaking — I hope she’s breaking ground.”

Gerber’s fashion month dominance dramatically overshadowed the usually clickbait-y Jenner and Hadid phenomenon, which has ruled on the runway in recent years. For this season, at least, the 16-year-old effectively eclipsed her older — and much more followed — peers.

“Before I say something, like, ‘Oh, those girls better watch out’ — the answer is yes. Yes, yes,” Scott says when asked if he anticipates Gerber becoming as big as the other three.

Earlier this year, Jenner told Love magazine of Gerber: “Listen, were [sic] all trying to get all our work in now before she hits the scene. When that happens, we’ll all go broke!”

“There’s cred to that a little bit I think,” Scott says of Jenner’s sentiments. “Gigi and Bella are definitely going to continue, and I think Gigi has shown and proven herself to be a juggernaut out of this world, and Bella’s record-setting covers of Vogue this September is pretty good proof in the pudding that she actually has good chops.”

“She’ll be the first model to really blossom into this business, full-on [after Instagram] because I feel like Gigi, Kendall and Karlie Kloss were the girls who really spearheaded it — they became Instagram phenomenons to create their careers and go around the business that wouldn’t have allowed them to have a career,” Scully says of Gerber. “Kaia is in it now. Gigi and Kendall weren’t mega enough. [Kaia] will probably be the first person to be really, really mega.”

“I don’t think you can compare any of these models,” says casting director Anita Bitton, who cast Gerber, Jenner and the Hadids in the Marc Jacobs show. “I believe that Kendall and Gigi have transcended what the media has chosen to label as ‘Insta girls’ and have become brands of their own, and in their own right. Kaia is a brilliant and ambitious teenager; she will forge her own path, and it will be on her terms.”

Scully says it’s more about how young people interact with fashion now, and that growing a base on Instagram is par for the course. He frames Gerber’s success as more significant in its embrace of the “beautiful” model of her mother’s time, a look that has fallen out of popularity for years.

“Even when Candice Swanepoel happened and then Gigi and then Kendall, [I was] always hoping that they would be the bellwether of what’s coming next,” he says. “I hope Kaia will open the door to this kind of beauty again, because it is what the business is missing. Ever since Hedi Slimane came on the scene…we were about to go into a beautiful girl moment, and then [after Slimane at Saint Laurent] everyone had to be cool, cool, cool. And I think a lot of people in fashion missed the big picture, because people want to be able to identify with a kind of beautiful. In insular fashion people may think it’s all cool on the runway, but people who look at those pictures don’t like it and then the fashion community is upset that everyone responds to the Kardashians but you know what? They’re really pretty girls. Kaia is prettier than all of that. In the end, she is like an old-school [model].”

The matter of lineage is more than just good genes, but, Scott argues, Gerber taps into our desires for nostalgia.

“I think there is just something magical and amazing — yes there are other children of other models; Anna Cleveland graces my runway and does amazing things and Pat Cleveland is a legend and I opened by first Moschino show with Kristen McMenamy’s daughter…but the Supers…she’s the direct lineage. There has not been anyone in that iconic group of women to spawn a child that has continued that. And she’s able to do it and it’s not questionable.

“Even if there never had been a Cindy, there could still be a Kaia,” he continues. “Obviously the power of the Kaia is much more because of the Cindy. But she’s a classic American beauty that could have and would have succeeded on her own today. As humans, we’re nostalgic, and that’s just part of our humanity. That’s why it hasn’t waned, that love for [the Supers], that nostalgia; she touches upon that nostalgia in that way. They’re powerful emotions, and I think it’s something that obviously works in fashion but in pop culture in general.”

It’s the lineage that will protect her from withering in the industry, and from becoming irrelevant when — or if — the Insta model bubble bursts.

“The thing about Kaia is, and again, it is because she’s Cindy’s daughter, but if Kaia were Kaia Gerber and she wasn’t Cindy’s daughter, I think the industry would be a lot meaner to her than they’re being,” Scully says. “She doesn’t get a break or a door open because her mother is who her mother is — if Kaia was nobody’s daughter, she would work. She really is that beautiful. What is nice is that because Cindy is her mother and Cindy is experienced, Kaia is getting treated the way that most girls don’t because she’s special. Whereas lots of other beautiful 16-year-olds are really going to have to…even if they don’t have to pound the pavement, at 18 they’ll be told they’re not fresh. That’s not going to happen to Kaia.”

Get ready for the next “Super” wave.