The London-based artist unveiled two steel sculptures — including a giant Birkin bag on display on Bond Street — in a bid to discuss femininity and women's rights.

It’s not a marketing ploy by Hermès or a play by Fenwick’s to lure shoppers back into its stores, or even the typical fashion-meets-art collaboration. Far from it. The art piece is the latest in a series called “Tools of Endearment” by Kalliopi Lemos, a Greek-born, London-based artist best known for her large-scale public installations. The piece made its debut on the shopping thoroughfare earlier this month, as part of Mayfair Art Weekend.

Also in the series is a steel corset; a stiletto featuring a knife in place of a heel, and a braid, part of the open-air Frieze Sculpture showcase.

Lemos’ intention from the get-go was to use her art to reflect on “how society deals with femininity, women’s rights and the condition of women within society.”

In the case of the giant steel Birkin bag, the idea was to create a symbolic container for women in which to place their aspirations for the future and, equally, their frustrations.

The choice of one of the most expensive materials and styles from a world-famous luxury brand was a key part of the equation for Lemos, who sculpted the surface of the steel to resemble ostrich leather. 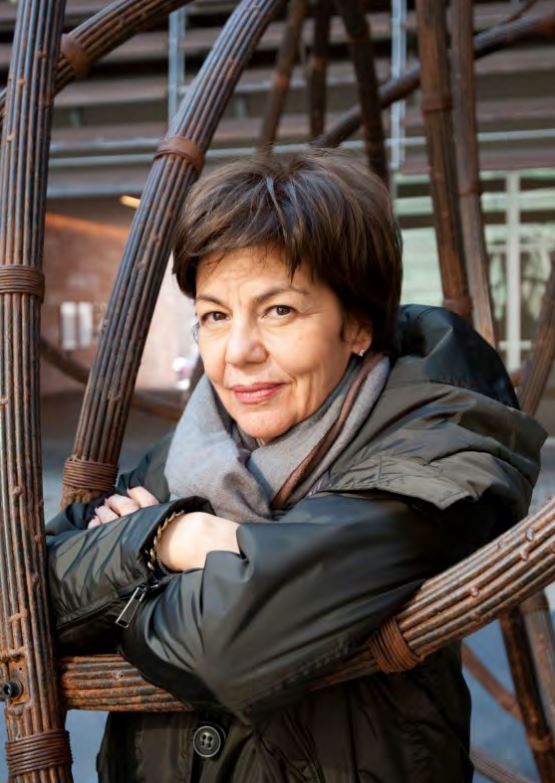 “Fashion is a burden for women because it determines how we need to look: We have to be efficient, good mothers, businesswomen and also beautiful and fashionable. Luxury fashion items, in particular, pressurize us. You have to have the best bag, the best shoes, the best dress to look a certain way,” says the artist, who is represented by the London gallery Gazelli Art House.
“That’s why I called it ‘Bag of Aspirations’ — if it was an ordinary brand, it wouldn’t express this pressure on women. It needed to have this kind of value to reflect the level of aspiration and frustrations women carry,” she adds, pointing to the illusion she wanted to create of the bag looking soft because of the ostrich leather effect — yet being extremely strong in reality.
Lemos has always enjoyed playing with dualities and highlighting the contrasts and contradictions that come with being a woman in the 21st century.
Her “knife” stiletto heel is aimed at portraying women as “injured” but also able “to inflict injury,” while the steel braid on display in Regent’s Park was all about juxtaposing vulnerability and strength.
“It’s a symbol of women’s lives as this sensual, soft, beautiful thing. The difference is that now it’s standing up on its own making a declaration about the world of femininity: Women have suffered the shame of having their hair cut, yet now this somber, dark plait is rising from the ground to the sky and saying ‘I’m still here, and I’m strong,'” says Lemos, adding that it was one of her most technically challenging sculptures to date.
To make it, she had to weave together myriad thin small rods into the towering, 22-foot-high final piece. 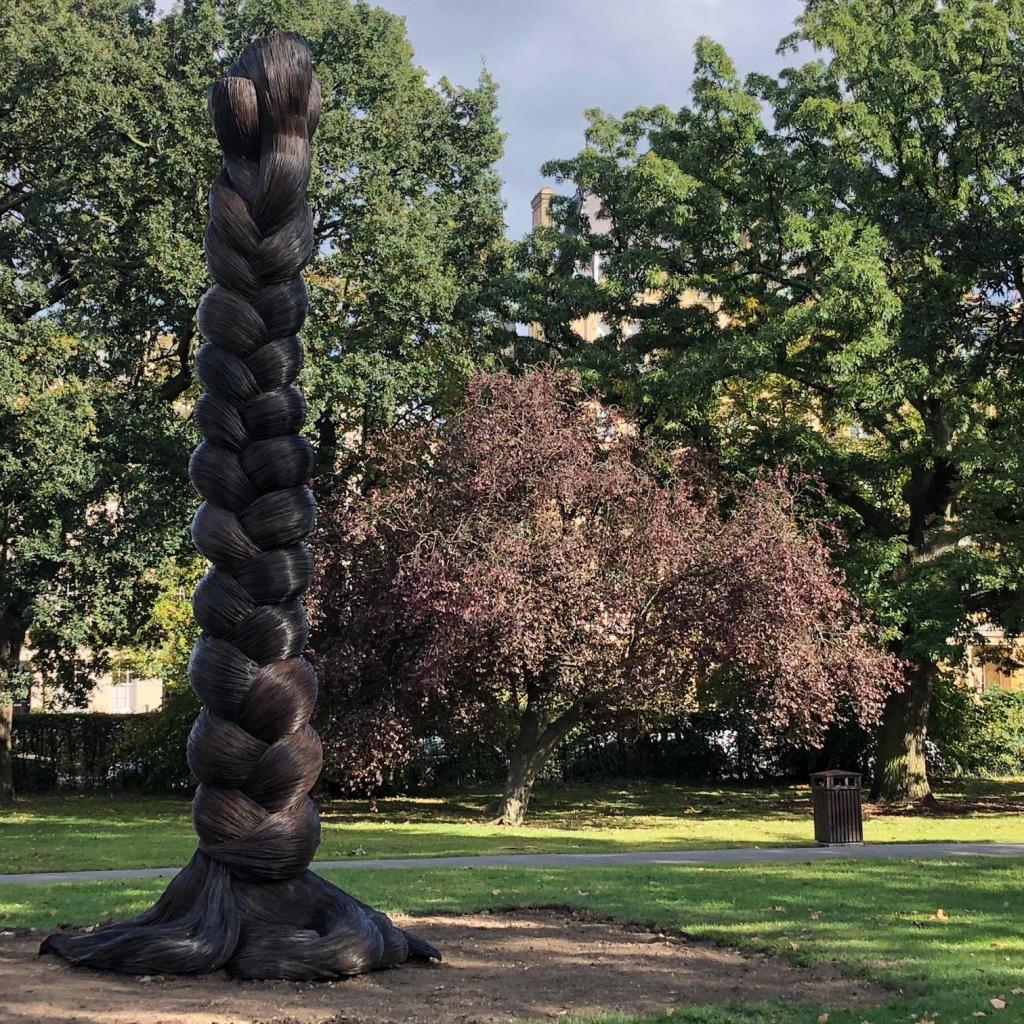 “I’ve seen tears shed in front of the statue at times. It touches tender cords in the psyche of people, especially women. But men identified with the sculpture as well, as hair has similar significance for men if you think of armies or concentration camps where men had to be shaved. They equally feel that hair is an important part of their identity,” the artist adds.
She also referenced the conversations that sparked from the sculptures’ feminist agenda: “There are comments from men telling me I’m exaggerating. It’s a debate: Men think we got more than we deserve, and women think that we don’t have enough.”
Sparking debate and urging people to face important questions by way of public art has always been Lemos’ priority: In the past she displayed “Wooden Boat With Seven People” in London’s buzzing Spitalfields Square, which featured sculptures of human figures in a boat that was originally used to transfer refugees to Greece, while her sculptures of a steel bra and corset live permanently in London’s Soho.
“I’ve always been interested in addressing people in their daily lives with these questions. We are so absorbed in our day-to-day that rarely do we try to empathize,” she says. “I wanted to bring those dinghies to people’s path, on their way to work, and to create a bridge between them and this issue,” she adds, referring to “Wooden Boat With Seven People” and the ways it highlighted immigration issues at the time. 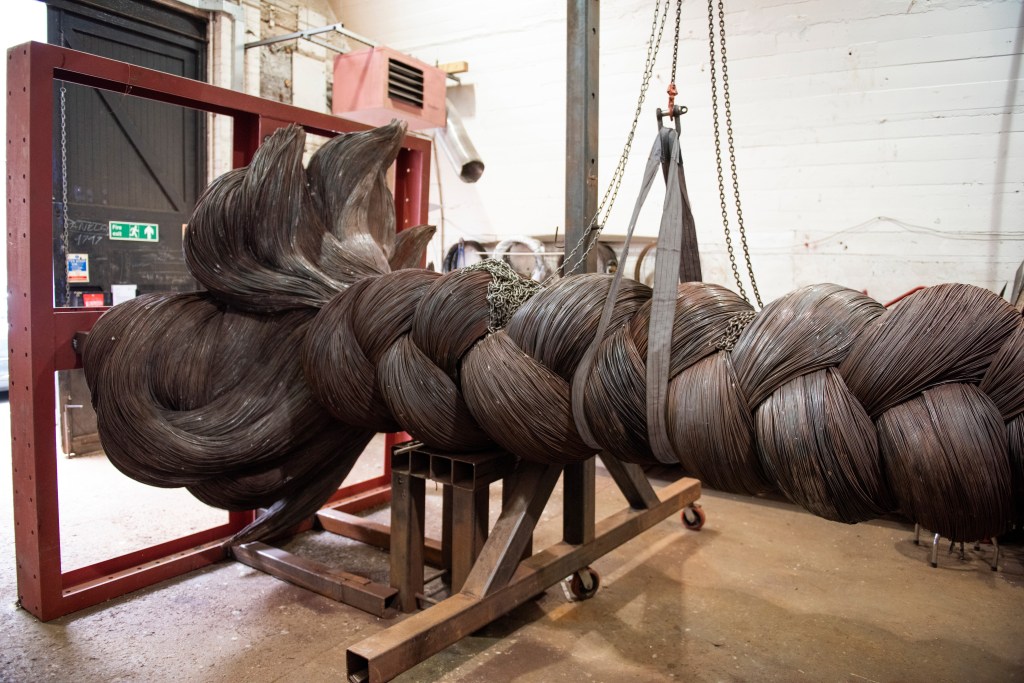 The Plait sculpture by Kalliopi Lemos.  Courtesy of Rowan Durrant

Lemos’ sculptures, and public art generally, have taken on a new significance in these last few months, allowing people to continue to interact with the works and the artists.
“People had been deprived from interacting with art for so many months because they were scared to go into a closed gallery. Having the sculptures outdoors allowed them to connect with art again and I was encouraged by the fact that people had kept a place in their hearts for art, and spoke about how much they need it in their lives,” adds Lemos.
Frieze
load comments
blog comments powered by Disqus