Kana Manglapus Under the Spotlight

The gallerist is exhibiting a series of photos taken with her iPhone at the beach, her first solo show since she shut down her namesake gallery in May. 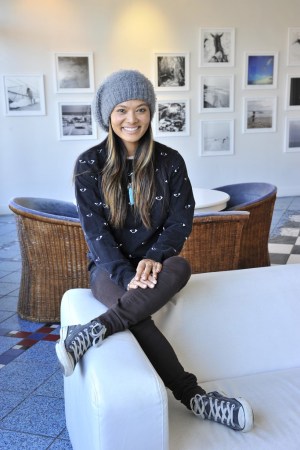 Kana Manglapus was at The Cadillac Hotel in Venice Beach, Calif., on a recent Tuesday hanging another show.

But this show was different. Manglapus, 40, was setting up at The Cadillac’s new gallery a series of photos taken with her iPhone at the beach, her first solo exhibit since she shut down her namesake gallery in May.

Consisting of 31 ocean- and sky-themed photos blown up to 16-by-16-inch prints, “#beatourist,” as the show is called, was tailor-made for this space, which is a hundred yards from the Venice Beach boardwalk and has large windows that look out to the ocean.

Donald Chick, a partner in Venice Development, which owns the hotel, wanted the show to be site-specific.

“So I thought about tourists, and what they would want to wake up and be inspired to do,” Manglapus said. The show opens Friday and runs through Dec. 8.

The images all came from Manglaplus’ regular surfing trips to local spots like Carbon Beach and San Onofre. Her outings are all documented on Instagram, which has become as much an outlet for artistic images as for selfies, and she realized her feed contained enough material for a show.

She found the experience so gratifying that she’s looking to curate other pop-up shows in the future at spaces such as the Roseark in West Hollywood and Milk Studios in Hollywood.

“I like having the freedom of not being tied to one space,” she said, adding that some of her peers — like dealers Aran Cravey and Claressinka Anderson — have also moved their galleries from Abbot Kinney as it evolves into a more retail-heavy street with boutiques, like the recently opened Gant. The original gallery of the art dealer Honor Fraser on Abbot Kinney is now an Alternative Apparel store, Manglapus noted dryly.

The gallerist has a canny way of sniffing out the next hot neighborhood. A decade ago while living in New York, she conceptualized a Colette-inspired gallery-meets-shop in the Meatpacking District called Section Urbane. When the financing went south, Milk Studios hired Manglapus to direct its gallery, where she stayed until moving to Los Angeles in 2006. In Culver City, she opened an interior design gallery called Bahay where she also continued to sell art. After the birth of her son in 2009, she transformed one of Alston’s studio spaces into Kana Manglapus Projects.

Now she’s keeping her finger on the pulse of what’s next. “If Lincoln Boulevard takes off, I’d consider opening another gallery there,” she said of the gritty thoroughfare that runs through the west side of Los Angeles and is home to skater kids and bikers alike. “I like the energy near the beach. It keeps you young.”