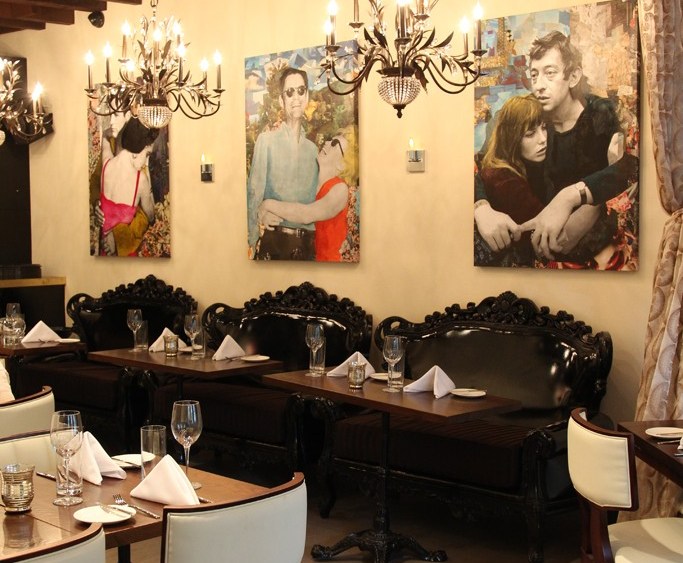 Henry Stimler and Menachem Senderowicz want to make kosher cool. While that notion may elicit a chuckle or two, the nightlife impresarios don’t see how the concepts conflict.

“We adore it,” Stimler adds, lingering on the verb a few seconds longer than necessary.

With Jezebel, their new kosher restaurant in SoHo set to open next week, the duo, who are best known for organizing a “Yiddish cabaret” series at Lower East Side club The Box, are more like an old married couple than two trendy thirtysomethings looking to widen their New York nightlife niche. And like an old couple, the two seem to contradict and complement each other perfectly. They sit across from each other at a table in their new space as it’s still being readied. Dressed in a blue houndstooth blazer with a pocket square, a matching striped button-down, wire-rimmed glasses and pressed khakis, Senderowicz, 34, is as well-groomed as his outfit. Stimler, 32, looks more like a reformed bad boy with five o’clock shadow and a tousled dirty blonde mane. A gold chain dangles from the belt loops of his black pants.

Stimler plays the part of rakish Londoner well, but the truth is, the two ex-financiers have a lot in common. Although Stimler is English and Senderowicz is Belgian, the duo practically grew up together summering in Belgium since they were teenagers. Both Jewish and nightlife connoisseurs, they grew tired of the lack of trendy boîtes catering to those who keep kosher. With the idea to open their own digs, they scouted out locations and settled on a brick townhouse at 323 West Broadway. Thanks to several wealthy investors, including Matthew Bronfman and the Nakash family, which launched Jordache Enterprises Inc., the pair gutted and transformed the 125-year-old building into a 4,500-square-foot, bi-level destination-to-be.

They have decorated with clever, Jewish-themed art spanning from a sort of triptych of famous Jewish/non-Jewish couples such as Serge Gainsbourg and Jane Birkin — Stimler dubs the installation “shiksa love” — to a painting of the “Last Supper,” featuring Woody Allen and other Jewish celebrities. There’s also a Shofar-theme running throughout the space. The front door handles are in the shape of the ceremonial horns and there’s a light fixture that the staff refers to as the “Shofar-delier.”

But what both Stimler and Senderowicz hope diners will think of when they come to Jezebel is the food. The duo have hired James Beard Award-winner Bradford Thompson as culinary director. Thompson, who isn’t Jewish, has been charged with creating modern American food that adheres to kosher rules. This includes a nondairy menu of dishes such as roasted bone marrow, grilled Cornish hen, seaweed-salt baked whole branzino, salted peanuts and anise-scented Pavlova strawberries and caramelized banana. Drinks — again all kosher — will be crafted by Nick Mautone, formerly of Gramercy Tavern.

“We have big dreams,” says a now-serious Stimler. “We don’t want to be known as a kosher restaurant, but a great restaurant that happens to have kosher food.”

Asked about his new enterprise’s provocative name, he’s is back to his rakish ways.

“There’s a biblical connection but that’s not why we picked it,” Stimler says explaining the restaurant’s name. “It’s the title of a Bette Davis movie. She wears a red dress and everyone else wears white.…I wanted to call the place Sodom and Gomorrah — maybe for if we ever have a downstairs club?”

As Stimler grins, Senderowicz intercedes in his slight Belgian accent: “He’s joking. He’s joking. Our parents would actually kill us.”