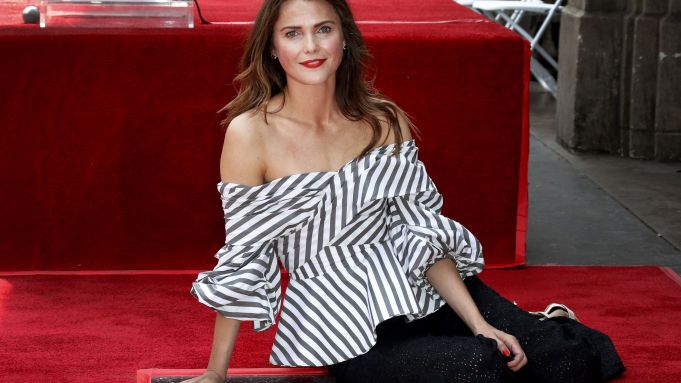 Keri Russell has finally gotten her star. The actress, who costars on spy drama “The Americans” and rose to fame with the titular role on “Felicity,” received the 2,613th star on the Walk of Fame in the Television category on May 30, hours before “The Americans” aired its season five finale. She was joined at the ceremony by her costars Matthew Rhys, Holly Taylor and Noah Emmerich, and former “Felicity” costar Scott Speedman. The actress donned a gray and white striped off-the-shoulder top and wide-leg trousers by designer Johanna Ortiz for the occasion.

Earlier in May, Russell voiced her love of online shopping in an interview with WWD. “So many of us shop this way now, online,” she said at a dinner celebrating the launch of Maisonette.com. “That’s, like, what I do late at night lying in bed when everyone’s asleep. There’s a half-hour of silence and I just sit there and look at beautiful things.”

She and Rhys will return to TV screens in 2018 for the sixth and final season of “The Americans.”

More Coverage From WWD.com:
Five Minutes With ‘Pirates of the Caribbean 5’ Star Brenton Thwaites
Sam Riley Takes a Shot in “Free Fire”
Freida Pinto Takes a Stance in “Guerrilla”
Sienna Miller on Motherhood, Being ‘Shy and Weird,’ and Taking on Tennessee Williams