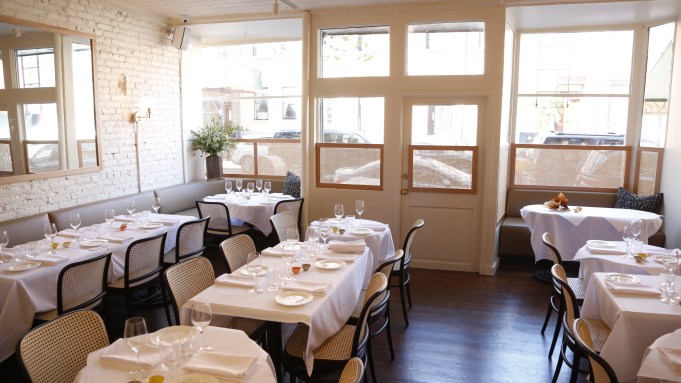 “I think that when you’re in this industry, once you’ve got to a certain point — I guess it’s always sort of the dream,” says Jess Shadbolt, who, after eight years at London’s famed River Café, is following the dream and will open King on Friday with fellow River Café alum Clare de Boer in the kitchen and Annie Shi at front of house.

“You probably never think it actually will ever happen,” Shadbolt continues, “and it’s just happened a lot quicker than we imagined it.”

The rush, in part, happened once their dream space suddenly became available. King takes over the corner of King Street and Sixth Avenue, vacated after a decade by Vietnamese restaurant Mekong. “It’s a wonderful neighborhood,” says Shi of their space, which sits on the cusp of the West Village and SoHo, across the street from Charlie Bird. “You’re still in downtown SoHo and the West Village, but we’re not quite in the heart of it — we’re a little bit more on the residential side, which is perfect.”

De Boer agrees. “We had our eye on the space for a while because we were familiar with the previous restaurant and I think it is so rare in New York to find this amount of frontage,” she says. “We love this corner — we love the bay windows, and on the outside, it feels almost like someone’s living room or dining room, which is the feeling we really wanted to create.”

That feeling is not by chance – de Boer’s mother, a residential interior decorator, came over from London to design the space.

Shadbolt and de Boer, both English, met native New Yorker Shi in London, where she was working at The Clove Club. Shadbolt and de Boer were both trained at Ballymaloe Cookery School in Ireland, one of the early innovators of the farm-to-table movement. “It’s run by this incredible, nuts old woman who basically started the entire farming movement,” de Boer says. “It’s a really comprehensive look at food — it’s not just how to cook, and how you develop your knife skills. It really gets you in touch with the ground.”

They take that approach to cooking, honed by their years at the River Café, and apply it in the style of a short daily changing menu of dishes inspired by Tuscany and Provence. “It’s not a daily changing menu for the sake of it,” de Boer stresses. “We’re really responding to the weather and the food as we get it in, and we’ll write the menu each evening for the following day.”

To open, they plan to serve dishes like their favorite fish stew, with half a lobster, fluke, clams, saffron and bruschetta; a poached Sasso chicken with lentils, celery and sauce ravigotte, and whipped salt cod with tomato bruschetta and dried oregano.

“Very simple, yet very elegant,” Shadbolt says. “I think there’s a real bravery in putting fewer things on a plate and it celebrates what’s on the plate and where that came from. That’s very much what we want to do. The food will look really amazing in the space as well, and I think that is why we kind of stripped the space back and kept it really chic and simple.”

The simplicity of the food and space, the King team predicts, will find a place in the booming culinary scene of downtown Manhattan. “In terms of where it’s encouraged for young people to have crazy dreams, this is the place to do it,” Shih says. “I think when you open a restaurant in New York you’re like kind of putting a stick in the ground, and we just wanted the best chance to be able to make it happen. The type of cooking that Clare and Jess do is, in a way, natural to how people eat in Europe, but I think that there’s room for it to happen in New York as well. There’s a niche for it.”