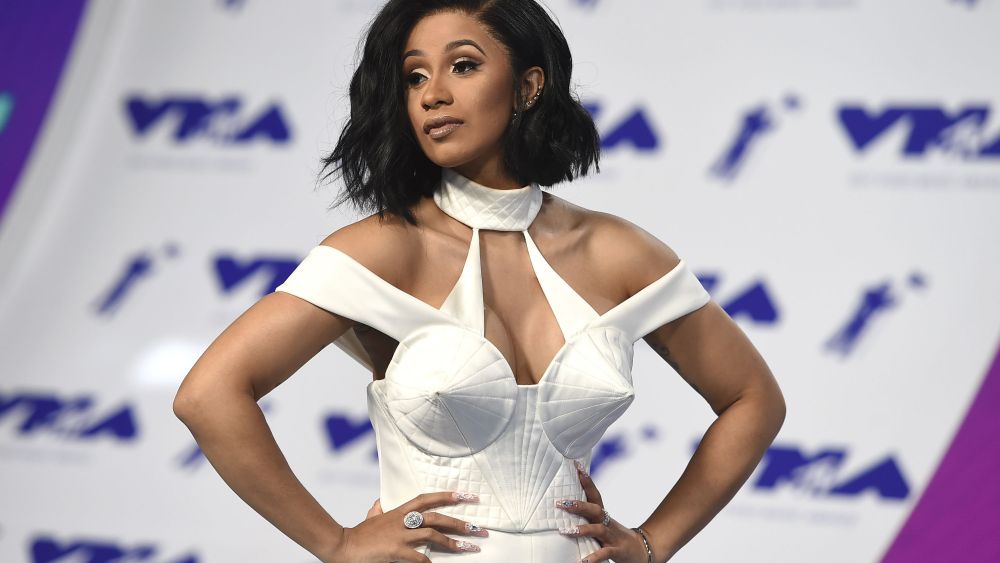 How does a “regular, degular, schmegular” girl from the Bronx, N.Y., become a Grammy-nominated artist with a certified platinum record in less than a year? Call it the Cardi B come up.

Known for her unfiltered personality and record-breaking hit “Bodak Yellow,” 25-year-old Cardi B has become a musical sensation, and the fashion world is taking note. Rapping about her “bloody shoes” — aka Louboutins — hasn’t just put Cardi on Mr. Louboutin’s radar, it’s earned her front row seats at fall fashion week, a partnership with Steve Madden, who considers himself her male counterpart, and a headlining performance at Jeremy Scott’s Art Basel Miami party last week. Not too shabby, huh?

Stylist Kollin Carter was originally brought on for Cardi’s July/August Fader cover and is now her go-to guy. His background includes editorial work, as well as three years on celebrity stylist Law Roach’s team. WWD caught up with Carter about Cardi B, her favorite pieces and what’s to come.

WWD: It’s been a whirlwind year for Cardi B career-wise. How has it been working with her?
Kollin Carter: Amazing. It’s very humbling. There will be moments where none of us have gotten sleep and you’ll never hear that come out of her mouth. You’ll never hear her say, “Oh my God, I’m tired.” You never hear her complain. It’s really great being able to work with someone who is in the fight to win. That’s what she is for sure.

WWD: How would you describe her style? What kinds of pieces is she drawn to?
K.C.: As everybody may know, Cardi loves fur. She’s really, really big on fur. If I could describe her style I would say drama. She’s really into the dramatics. We love to overdo it in performances — [it’s] one of those aspects that gives us that chance to be us, be out there, be bold and be fun.

WWD: She wears a lot of color, which is fitting given her personality. Is it a conscious effort on your end to incorporate color as much as possible?
K.C.: Yeah, I mean, I love going chic, I love going black. It’s Cardi that will come in and be, like, “Wait, we’ve been doing a lot of black, let’s do some more color.” We won’t even notice it. We’ll look down our timeline of everything we’ve done and it’s black, so she’ll always jump in and say, “Hey I want to play with color more.” Now I know when I’m out doing a pull, Cardi’s gonna want something with color in it.

WWD: Her nails are such a big part of her look, too. Are you ever tasked with styling full outfits around them?
K.C.: Honestly, no. The nails somehow just end up going with everything, believe it or not. Even if it’s just an accent of a certain crystal on her nails that’s bringing out one of the colors in her look, they always somehow end up becoming one with the look. The universe is on our side when it comes to her nails.

WWD: One minute she’s in Alexander McQueen, the next she’s in Fashion Nova. How do you incorporate high-low into her repertoire?
K.C.: It’s really important for Cardi to always be an example in a way to young girls who are coming up who may not be able to afford designer everything from head to toe. We always make it a point to support emerging designers whose lines are just as good but may not be as expensive. We like to be relatable in that aspect, like, “OK, we have this $2,000 shoe, but let’s place it with this top that any girl around the way would be able to afford.” That’s really important to us.

WWD: Who are some emerging designers you two like?
K.C.: We love Romeo Hunte. Jerome LaMaar is one of the designers on our wish list to wear. We’ve had him at all of our fittings, but we haven’t gotten to actually wear him yet. He’s from the Bronx, she’s from the Bronx and she loves all of his stuff. We just used this crochet designer [Mani’ Outterbridge] that Cardi fell in love with. She does all crochet swimwear. She drove four hours from D.C. to actually come and bring Cardi this look she stayed up all night to make.

WWD: Was that the red crochet look Cardi wore on Instagram?
K.C.: Yes. So in Jamaica, it didn’t make the video [we were shooting] and Cardi was like, “Oh my God, we didn’t use the crochet look.” I’m like, “I know.” It wasn’t right for any of the scenes, but nevertheless it was amazing. She was like, “I have to get a picture in it and I have to shout her out.” So right after the video, we went to a room, she got undressed and we slipped it on and she was like, “Oh yeah, this s–t is poppin’.’ We stood right on her terrace and took a picture and she got the designer’s information, her handle, and she posted it and tagged her. She’s really adamant about giving the emerging or the underdogs their credit.

WWD: Will you be styling Cardi for the Grammys? What else is in the works?
K.C.: Yes, I am [styling her for the Grammys]. We are all super excited. There’s something really special coming up with someone really special. There’s a few fashion things on the table as well. Me and her are going to come together and design a line in a collaborative effort with a brand, so that’s gonna be super fun, too. Let’s just say that Cardi’s gonna be around for a while in the fashion world.

Steve Madden Considers Himself ‘the Male Version of Cardi B’