The founder of the high-end fish restaurant explains his modus operandi as he envisions a future without menus.

MILAN — “I am a host, but sort of like a designer, I observe my customers and I know how to make them feel at ease.”

With this modus operandi, Enrico Buonocore, who opened his first high-end seafood Langosteria restaurant in 2007 and has grown the business to encompass three more units, is planning to unveil a new concept, called Langosteria Cucina, at the end of next month in Via Savona here, next to his first eatery.

Buonocore is not your average restaurateur. He takes pride in having created an organization that counts 180 employees and that is expected to close 2019 with sales of 21.2 million euros, up almost 18 percent compared with 2018, but underscores that this was achieved not only through food but also by carefully creating “the right atmosphere, with the right light, uniforms, music and a familiar service,” which he believes make Langosteria unique. “But never too confidential — I have to always bill the table in the end,” he says with a laugh.

“Customers are our real assets and around 70 percent of guests at lunch are return customers. Our clients plan between 24 and 30 dinners a year,” says Buonocore, who is approachable, cheerful and clearly enjoys what he does.

The entrepreneur’s focus has helped him develop Langosteria into a hot spot in Milan — and there are plans to expand outside Italy.

As reported, Peter Marino told WWD he would design the first Paris branch of Langosteria, to be located on the seventh floor of La Samaritaine, the landmark department store slated to reopen in April as a showcase for LVMH Moët Hennessy Louis Vuitton businesses.

Buonocore admits he is eyeing openings “in cities that have the culture of taste,” citing New York, London and Madrid as other potential locations, “where people appreciate what we do. I think that Langosteria should become an Italian flag.”

Buonocore’s accomplishments caught the attention of several investors, and in 2018, Remo Ruffini and his vehicle Archive Srl acquired a 40 percent stake in Langosteria Holding Srl, which includes Langosteria; Langosteria Bistrot, which opened in 2012; Langosteria Café Milano, which opened in 2016, and the seasonal Langosteria Paraggi located on the beach near luxury resort town Portofino at the renowned Bagni Fiore Beach Club. “I accepted the offer of a family,” he says; Pietro Ruffini, son of Remo, is an executive board member of Archive. “The people I spoke with before were all about money, scalability, openings,” continues Buonocore. “I don’t want that for Langosteria. I saw creativity in Remo. We meet every two weeks, it’s important  for me as there is an exchange between two different worlds. He himself was a client of Langosteria and he is very focused and doesn’t bluff.” 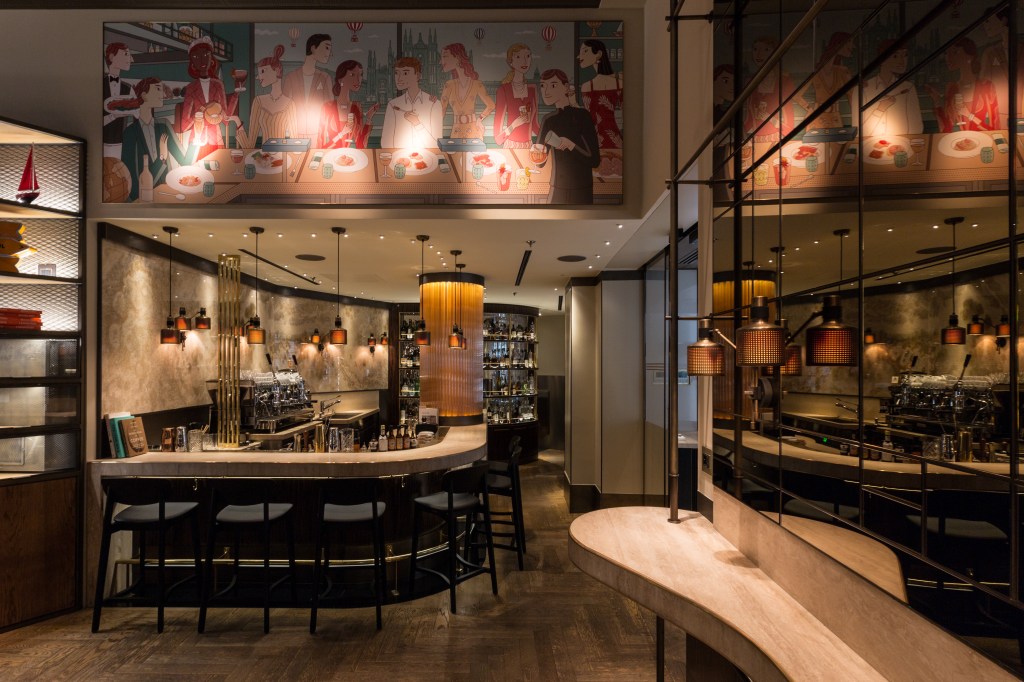 While Buonocore was previously personally involved in the design of his restaurants, for the first time he has delegated the blueprint of Langosteria Cucina to DimoreStudio.

The concept behind Cucina, which in Italian means ‘kitchen,’ is also unique as guests will not choose from a menu. “Choosing is stressful. At Cucina, we will offer a menu depending on the availability of the ingredients and it will be as if you come to my house to dine — what we prepare is what you will eat,” says Buonocore, who believes menus will no longer exist in 20 years. “They are not sustainable, there is too much waste.”

“I want it to be a place that feels like home, you come in, you sit and you eat. There will be a core selection of food that will always be available, from olives and ham to cheese, and then each day depending on what we buy, we will draw out a menu that is the same for every guest. It will again center on fish, but who knows, there could be a surprise carbonara or meatballs,” he says with a chuckle.

Cucina will employ 16 people and the locale will seat around 35 to 40 patrons, plus six at the bar. Reservations will be made online or, if you are a serial Langosteria customer, you will receive a special phone number.

Following the news of Cipriani coming to Milan next year, Buonocore said the city has been changing, especially after the Expo in 2015. “It’s been overturned, it’s beautiful and active – and less expensive than New York, London or Paris. Milan used to have a business mainly of trattories, it did not have an international character,” he says.

Buonocore started his business 12 years ago with a bar in Milan, where he began to offer meals, too. “My mom would cook a parmigiana, I would prepare meat balls on Thursdays, carpaccio, mozzarella and burrata,” he recalls. He realized there was room for a fish restaurant. “I saw the oyster and seafood plateaus served in Paris and I thought they were so festive and made the experience sexier than eating a steak,” he says with a laugh.

He shares his success with his employees and collaborators. “Choosing the right people is key,” he says. Denis Pedron and Domenico Soranno are the corporate executive chefs.

“We must always evolve and innovate but we stay true to our roots. We became famous for how we cut and treated the fish and vegetables we serve,” he says over a dish of octopus and potatoes that are exquisitely cut and presented, every morsel a perfect circle in what looks to be the same size. Even the ceramics are exclusively designed for Langosteria, which is getting its own music curator.

Langosteria revisits five menus a year, and it has a daily list, depending on the fish that is available. “The sea is not a supermarket and we never want to bore our customers — that’s also why they keep coming.”

The restaurants are posting a double-digit growth every year, but Buonocore reinvests in constant renovations and fine-tuning.

“I can’t do fast casual, I like luxury. I did not know it, but I adore that world and I know that what I do is liked by people who like luxury,” he says.