Where to go, what to eat and drink. 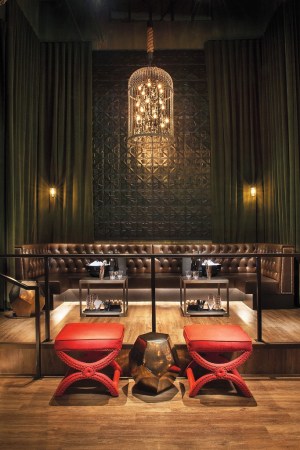 The 4,688-square-foot venue has a capacity of 250 and unlike many other nightclubs, The Sayers Club forgoes a traditional dance floor for a smoking-room ambiance with leather-tufted sofas and tables with bottle service, 20 of which are VIP.

The interior exudes an industrial vibe, while an outdoor patio overlooks the Strip, adding to the club’s relaxed feel.

ALL DAY, ALL NIGHT: For its third U.S. restaurant after Denver and Los Angeles, Tom’s Urban opened on the casino floor of New York New York, inside a 12,000-square-foot space next to the hotel’s replica of the Brooklyn Bridge. This contemporary, casual dining chain comes from restaurateur Tom Ryan, founder of Smashburger, and partner Rick Schaden, offering an eclectic menu of familiar favorites with worldly influences.

With three full-service bars and an outside patio, Tom’s Urban is also a good spot to stop for spirits, offering 35 craft beers on tap and a selection of specially designed cocktails, such as the WTF, made of whiskey, red wine, Brooklyn beer and orange and blackberry liqueur ($8.50). Or, for a late-night treat, try a spiked milkshake with Bacardi coconut chocolate, Kraken spiced rum salted caramel, Fireball whiskey cinnamon or Patron xo coffee flavors ($13.50).

SINATRA’S SOUND: In “Frank — The Man. The Music,” audiences at The Venetian’s Palazzo Theatre are transported to the Seventies to relive the classic tunes of Frank Sinatra, who would have celebrated his 100th birthday this year.

With help from a 32-piece orchestra, directed by Sinatra’s former conductor Vincent Falcone, and Oscar-nominated makeup artist Kazu Tsuji, who aged Brad Pitt in the film “The Curious Case of Benjamin Button,” singing impressionist Bob Anderson captures the essence of the Chairman of the Board.

“Playing this iconic legend is a humbling and monumental experience,” Anderson said. “I want everything to be as close to reality as possible.”

The 90-minute show, produced by Hoboken Productions in association with Stephen Eich, revives some of the jazz musician’s top hits, including “Come Fly with Me,” “One for my Baby” and “My Heart Stood Still.”

NEXT: Bazaar Meat by José Andrés >>

CARNIVORE’S DELIGHT: Bazaar Meat by José Andrés inside the new SLS Hotel is not a typical steak house. Rather, according to its chef, it’s a culinary “celebration of the carnivorous, in all its forms.”

Chef Andrés has two other restaurants on the Strip, Jaleo and China Poblano at The Cosmopolitan.

Named “2014 Las Vegas Restaurant of the Year” by Eater, among its many accolades so far, the dining destination offers a lengthy list of meat and seafood in small or large portions to share. The 13,000-square-foot space, designed by Philippe Starck in collaboration with Gensler and SLS Hotels, accommodates up to 500 guests and features an open kitchen with a wood grill and rotisserie “fire stage” and a raw bar.

The menu includes steaks, which arrive sliced, tapas style ($38 to $100), as well as options like braised lamb neck with fried oysters ($25) or the Morcilla with Uni, a Spanish blood sausage made with fresh sea urchin ($25). Other choices include a variety of meat-themed appetizers, soups, sandwiches, caviar flights, carpaccios and tartares, like a cotton candy foie gras with crispy amaranth ($8). For omnivores and herbivores, Andrés offers a selection of vegetable and potato side dishes and salads.

NEXT: “The Hangover Experience” at Madame Tussauds’ >>

WAX WOLF PACK: For a quick comedic break from the trade-show rush, check out Madame Tussauds’ “Hangover Experience,” a wax re-creation of the scenes and characters from the popular Warner Bros. film franchise based in Las Vegas.

Located at the Venetian, the 30,000-square-foot museum’s newest themed room (1,100 square feet) includes wax statues of “The Hangover” characters Alan and Phil, played by Zach Galifianakis and Bradley Cooper, respectively, as well as replicas of the hotel room, smashed police car and wedding chapel from the film. The “Alan” figure, complete with his ever-present satchel, is the newest addition to the exhibition and took a team of 20 artists almost a year to complete.