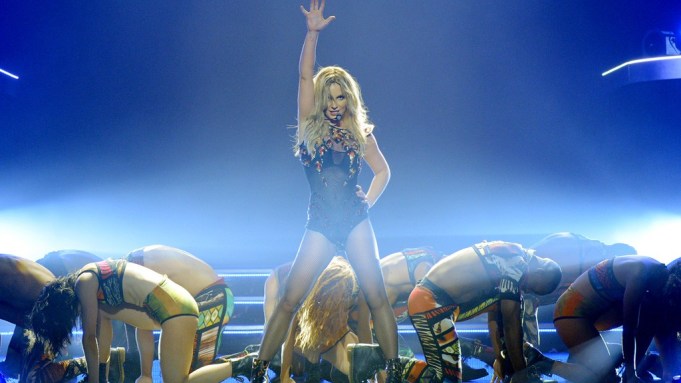 Las Vegas offers no shortage of new amusements each season. Here are four top picks for after trade-show hours.

BRITNEY ONE MORE TIME: Pop star Britney Spears began her two-year residency in Sin City with the December premiere of her highly anticipated show, “Britney: Piece of Me,” at The AXIS Theater inside Planet Hollywood, and the reviews are in: Ignore the lip-synching rumors and don’t miss this one.

The high-energy performance, complete with Brit’s signature backup dancers (14, to be exact) and elaborate costumes, compiles more than 20 hits from the pop princess’ 15-year career, including “Baby One More Time” and “Circus.”

At times the 90-minute show indeed feels like a circus, with Spears performing inside a ring of flames, under sheets of falling water or soaring above the crowd on a high-wire. Somehow, she still finds time to change into eight different costumes, each designed by Marco Marco, whose one-of-a-kind creations have also adorned Fergie, Selena Gomez, Katy Perry and Nicki Minaj.

Creative director Baz Halpin, whose award-winning skills have enhanced Perry and Taylor Swift concerts, is the main visionary behind the spectacular, which boasts “state-of-the-art, never-before-seen technology,” including a mega indoor video-projection screen.

Fellow popsters Perry, Gomez and Miley Cyrus were spotted in the opening night crowd to support their friend, who had “chills” before her big debut, according to Britney’s Twitter account.

Tickets to performances through September range from $59 to $229, although they may be difficult to score, as the venue seats just 4,600.

BREAKING THE RULES: Channeling the ambience of a Twenties social club, The Cosmopolitan Hotel’s newest addition, Rose. Rabbit. Lie. — an all-in-one bar, restaurant, live performance venue and club — delivers a fresh genre of entertainment to the Strip, touted by its creators as “a grand social experiment.”

Five rooms comprise the communal venue: a library, study, music room, swimming pool and ballroom, each of which offer a markedly different vibe and corresponding cocktail (with custom, slow-melting ice cubes, no less).

Guests are encouraged to curate their own “mash-up of experiences,” perhaps beginning with a “Dark & Stormy” cocktail ($16) before taking a seat for the first canto of “Vegas Nocturne,” a 90-minute vaudeville and acrobatics performance created by Spiegelworld, the production company behind the popular “Absinthe” at Caesars Palace, and produced by David Foster. Sit ringside at the 8 p.m. and 10 p.m. shows for $135 a head, or grab a $30 ticket for the standing-room-only midnight performance.

Just want dinner? No problem. Following a “no rules” mentality, show tickets and restaurant reservations are separate — although it’s not guaranteed that performers won’t interrupt your meal with some improvisational dancing atop the bar.

Finally, guests can top off the evening with a dip from the 500-glass-tall sparkling Champagne tower.

Moonen describes the atmosphere within his newest dining destination as “steampunk,” a reference to the subgenre of science-fiction writing about industrialism at the end of the 19th-century Victorian era — e.g., H.G. Wells. Deep-red velvet curtains play against metal lighting and wall fixtures throughout the dining room to invoke a sci-fi speakeasy.

The menu, nicknamed “Nourishment Chart: The substances necessary for growth, health, happiness and comfort,” showcases a variety of culinary creations and libations, many of which are large portions to encourage sharing.

“It’s comfort food, but it’s not going to be the kind of comfort food that makes you feel like you got hit in the stomach with a sledgehammer,” Moonen said. “So I’m going to reinvent things.”

Guests may indulge in revamped favorites, such as inside-out French onion grilled cheese ($9), buffalo fried oysters ($24) and shellfish shepherd’s pie ($34). Or, pair an entrée with a hand-crafted cocktail, such as the Fleur De Lis ($30), a mixture of lavender-infused vodka, lemon juice, Hellfire Habanero Shrub Bitters and cucumber soda, and finish up with a pumpkin crème brûlée ($9) or mahalo matcha panna cotta ($10).

NEXT: Kumi Japanese Restaurant & Bar By Akira Back >>

THE JAPAN PLAN: Following in the successful wake of Yellowtail Japanese Restaurant & Lounge at Bellagio, executive chef Akira Back has again partnered with The Light Group to open his second Las Vegas venture, Kumi — “beautiful” in Japanese — inside Mandalay Bay.

A former professional snowboarder turned foodie, Back trained in the kitchens of such culinary masters as Nobu Matsuhisa (Nobu Restaurants), and Masaharu Morimoto (“Iron Chef America”), whom he credits with teaching him “the value of using rare and exotic ingredients” in his culinary creations.

The Korean-American chef channels his heritage — including some of his mother’s family recipes — while exploring new twists on traditional Japanese dishes, experimenting with flavors and textures with the aim of leaving guests feeling “both comfortable and adventurous.”

Fan favorites, such as the “Hot Mess” signature sushi roll made of crab and sashimi poke ($21), and Back’s spicy “Screaming O Sauce,” already have celebrities like Justin Timberlake coming back for seconds.