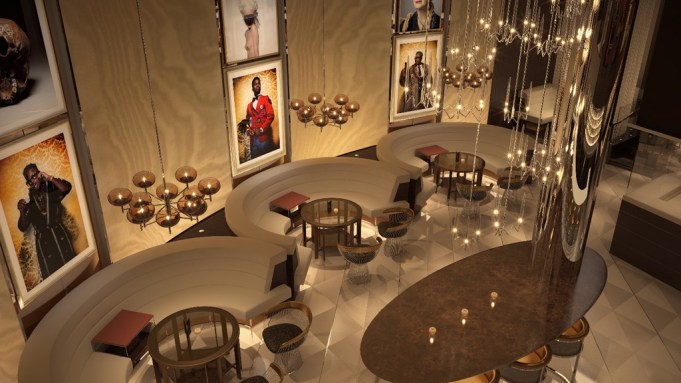 POP THE CORK: Cap a day of walking the trade shows with a cool glass of bubbly and some caviar at Fizz Las Vegas, the Strip’s sleek new Champagne lounge inside Caesars Palace.

Under the creative direction of David Furnish and his husband, Sir Elton John, the 2,750-square-foot space recently underwent a $3 million renovation, during which the couple oversaw interior design details alongside owners Steve Kennedy and Michael Greco (Marvel Management and Marketing) and designer Todd-Avery Lenahan (TAL Studio).

Specialty drinks include the Fizz Noir signature cocktail, made of cherries, fresh lemon juice, Grey Goose Cherry Noir, rock candy syrup and brut Champagne; the Hercules (aka the peanut-butter-and-jelly-cocktail), made of black raspberry vodka, walnut and raspberry liqueurs and fresh raspberry puree, with real peanut butter around the rim. Or indulge a sweet tooth with the Crème Fizz, a caramel mousse topped with hazelnut brittle and white chocolate dust.

EXPECT THE UNEXPECTED: Taking the variety show to outrageous new levels is Beacher’s Madhouse, conceived by nightlife impresario Jeff Beacher in 2002. The act now has a new home at the MGM Grand; Miley Cyrus hosted the Dec. 27 opening alongside Katy Perry and Selena Gomez.

This fantasy-filled, 8,500-square-foot theater is where Beacher promises to take “live entertainment to new levels” with acts that combine the “energy of a nightclub and the atmosphere of a circus.”

Guests enter through a speakeasylike corridor, slyly hidden behind a bookcase, and are led into pure madness: “flying midget bartenders,” mini Britney Spears, dancing Oompa Loompas, live monkeys. And of course, the world’s tallest burlesque dancer, 6-foot-7 Amazon Ashley, who taught Miley her now infamous “twerk” move (and has since twerked alongside the star in her “We Can’t Stop” music video and VMA performance).

Beacher’s also has a Hollywood location, which opened in 2010 inside the Roosevelt Hotel. Its biweekly shows seat 150 guests.

Live performances are held Tuesdays through Saturdays at 8 p.m. Tickets are $75 for general admission or $125 for reserved seating.

WHEEL IN THE SKY: The famous Las Vegas skyline will soon include the world’s tallest observation wheel — appropriately named The High Roller — which will open this year as the centerpiece of The Linq, a new outdoor retail, dining and entertainment plaza just off the Strip.

At 550 feet, The High Roller will stand 100 feet taller than the London Eye, and nine feet above the Singapore Flyer. Guests in one of the wheel’s 28 cabins, each of which can hold up to 40 people, will enjoy towering views of the city during leisurely 30-minute revolutions.

Located on Las Vegas Boulevard between the Quad and the Flamingo hotels, The Linq is the new concept from Caesars Entertainment Corp. Inspired by the vision of a pedestrian-friendly urban street, The Linq fuses many genres of entertainment together into one open-air arena — comparable to Bourbon Street or a smaller version of Times Square.

Overall, the 200,000-square-foot casual marketplace will offer between 30 and 40 shops and restaurants that span a variety of price ranges and cuisines, including the upscale Chayo Mexican Kitchen + Tequila Bar, and F.A.M.E., which offers casual Asian fusion. Other popular tenants include Kitson and Sprinkles Cupcakes — both making their Las Vegas debuts.

The Linq also caters to nightlife lovers with Brooklyn Bowl, an offshoot of the popular New York restaurant and music venue of the same name, as well as the return of O’Sheas, a traditional Irish pub offering more than 60 different kinds of beer.

The restaurant’s 7,000-square-foot, 230-seat interior is divided into a breezy, earth-toned Atrium with lighting meant “to emulate the natural sun,” and The Bodega, a dining room with barrel-vault ceilings that evoke an urban winery.

The eatery’s pizzas — made in 700-degree wood-fired ovens — have also become a favorite and include a variety of signature toppings, including Nana D’s meatballs, Italian sausage (both $15) and curry shrimp with asparagus and coconut cream ($17).

DeMarco has curated a fine wine list, or try the Punch Drunk Love cocktail ($12), a mixture of mint-infused gin, Lillet Rosé and fresh watermelon and lime juices — large parties can order it “family style” for the whole table ($68/$99).

FAST STATS: The numbers are in. The NPD Group reports 2013 U.S. sales and change from 2012 in the following categories: