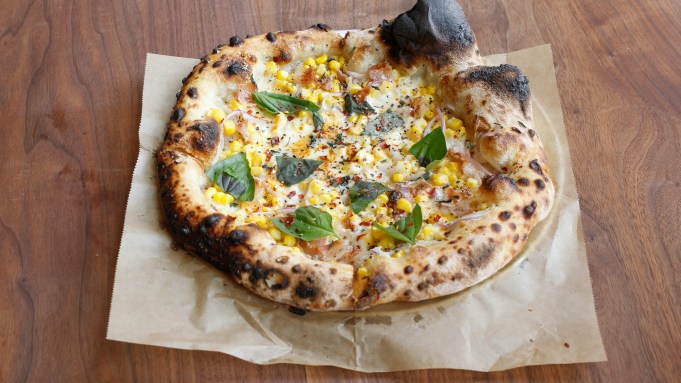 “Everybody has a different opinion about what makes a good pizza, especially in New York,” Tourondel says, sitting in the bright dining room of his latest restaurant, L’Amico. “The idea started with the pizza,” the French-born chef explains of his new concept. “The idea behind it was to do this cuisine inside a wood oven. We built the menu with the pizza section, then we built around it.”

It’s the chef’s first restaurant since splitting off from the Arlington Club; Tourondel was also behind the successful BLT brand of restaurants peppering the city.

Tourondel noted that his concept for L’Amico was a long time in the making—and he spent five years working to perfect the pizza dough for the project.

“I do a longer fermentation on the dough,” the chef discloses. “It makes it fluffy, heavy, less gummy and chewy than Napoli pizza, and a little bit more crispy.”

His research and development investment pays off in the form of soft, wood-charred dough, which acts as a canvas for Tourondel’s topping combinations — spiced burrata is paired with summer squash; white mushrooms are rightfully dusted with truffle paste, fontina and taleggio.

“Is it really an Italian dough I’m doing? No, because it’s my dough,” Toulondel stresses. “It’s really an American-Italian cuisine. You come here and try to eat Italian in a restaurant — [the cuisine] doesn’t translate.” His menu further stretches the boundaries of cuisine designations. While the pizza is the backbone of the restaurant and there are several pasta options, the menu also includes a range of appetizers and main dishes, such as skirt steak and roasted chicken. “This isn’t much of an Italian dish,” he says of his avocado and kale salad on the menu. “It’s really New York-American.”

The restaurant is located adjacent to the Eventi Hotel in an area that’s not quite Chelsea or the Flatiron (to fashion folk, it’s the Garment District). The area has benefited from rezoning and an influx of residential developments, which bring with it a greater demand for neighborhood dining options — Danny Meyers’ Marta recently opened down the street. In fact, L’Amico is Tourondel’s second project in relation to the hotel; he also created the menu for The Vine, the hotel’s bar and lounge.

The dining room of L’Amico, fully visible from Avenue of the Americas through floor-to-ceiling windows, is fashioned with wood and warmly lit details that evoke the feeling of “being in an oven.” The kitchen, prep area, and two wood ovens are completely visible from every corner of the room, giving diners the illusion that they are in the chef’s kitchen. “For me, the visual is very important. When you create a concept, somehow the food you’re trying to accomplish has to be related to where people are going to eat,” Tourondel explains. “Sometimes you get a steakhouse inside of a sushi restaurant.” (A mash-up for which his last restaurant, Arlington Club, was criticized.)

Tourondel is also an animated storyteller, detailing his visits to many revered pizzerias in Italy. But he insists that New York has a stronger hold on the craft of pizza-making, a view that was corroborated by a pizza chef in Amalfi. “He looked at me and goes, ‘is it true in New York City you guys have the best pizza in the world?'” Tourondel recounts. “‘In Italy, we say so!'”

The best pizza shops of New York City — an exclusive club, indeed. Time will show if L’Amico can join their ranks.