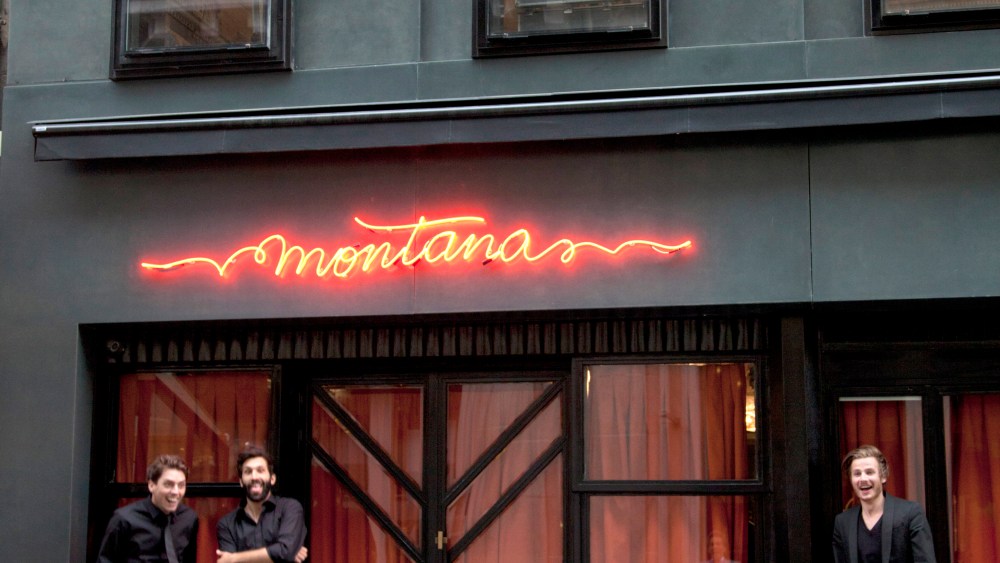 Picture an 18th-century salon, crossed with Picasso’s garret and the vision of Gene Kelly prancing around in “An American in Paris.”

That’s what guests at Le Montana can look forward to when the famed nightclub unveils its brand-new hotel rooms and restaurant this week. Meanwhile, with its louche Serge Gainsbourg vibe, the recently reopened bar and club have turned into a haven for those riding out the summer doldrums in Paris.

This journey through Paris’ glory days was imagined through the creative eye of Vincent Darré.

“I wanted to create the apartment of a Parisian dandy,” the interior designer explained. “I didn’t want it to look like a hotel, but rather as if you had been given the keys of an apartment that belongs to Pablo Picasso or Serge Gainsbourg.”

The new Montana has maintained its heritage. The facade, with its red neon sign, was entirely redone by French architecture studio Bona-Lemercier. The black building, located next to Café de Flore and facing a Louis Vuitton boutique, stands out in the chic and quiet street in Saint-Germain-des-Prés.

It has also kept its fashion pedigree: Darré was Karl Lagerfeld’s right arm at Fendi, and his CV includes stints as artistic director at Moschino and Ungaro.

The renovation has been driven by entrepreneur Jean-Yves Le Fur, who bought Le Montana in 2009 and has a strong foothold in fashion through his other business interests, like the men’s magazine Lui and advertising agency Mad (also: his wife is model Małgosia Bela). Darré noted the space has gone through several incarnations.

“My mother was dancing with Boris Vian at the Montana, a vaulted jazz haunt at the time of the existentialists. In the Seventies, Le Montana was a crappy hotel,” he recalled, adding that Grace Jones, Jessica Lange and Jerry Hall all spent time here.

Designer Jean-Charles de Castelbajac recalls hanging out at Le Montana as a young boy when he arrived in Paris in the late Sixties. “I used to go to Le Bilboquet around the corner, where Paco Rabanne had his historic show and where Brigitte Bardot sung. Le Montana was the obligatory stop between the Bilboquet and the Flore. The history of Saint Germain-des-Prés is crystallized in this tiny area between the three spots,” he said.

Nowadays, the club draws a mix of fashion, film and music stars. Kate Moss attended Lui’s anniversary party in 2014 with Jamie Hince. Lenny Kravitz and Scarlett Johansson treat it as a hangout when they’re in town (the actress’ Paris home is a stone’s throw from there).

Sporting his signature bow tie, Darré stopped off in Paris in August to finalize the last details before jetting off to Mustique with his longtime friend Farida Khelfa. “I wanted it to be like in the old castles in which each room has a different universe and is named after a color,” he told WWD on a tour of the hotel.

Bleu Tabou, a Forties-style room, contains jars inspired by Picasso’s terra-cotta and cubist trompe-l’oeil frescos designed by French artist Alexandre Poulaillon. The Noir Métaphysique suite features a dressing area with folding screens, while Rouge David X sports a fake chimney and a balcony with a breathtaking view of Paris (so does the Miroir Aluminium suite).

De Castelbajac said the renovation respects the original spirit of the place. “What Le Fur has managed to create is the revival of authenticity, with a side of Parisian extravagance,” Castelbajac said.

“It’s an intellectual luxury, it’s not an overdose of marble and luxury. Instead, it’s an initiatory journey. You gain access to the hotel through the place where you party — that says a lot.”