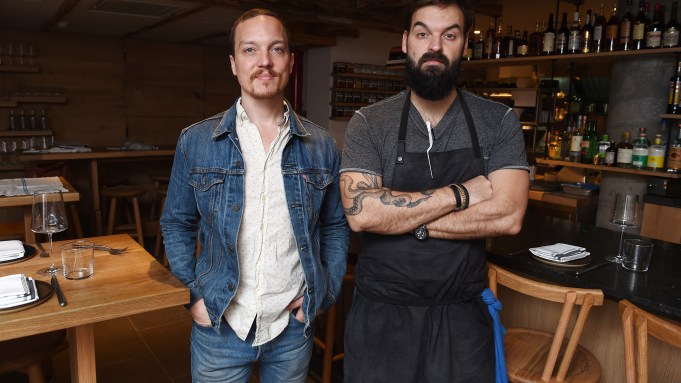 “I know excitement is not really the name of a cuisine, but I couldn’t really put it any better than that.”

Chef Greg Proechel, formerly the executive chef at Le Turtle, was explaining the concept for his new restaurant, Ferris, located in a minimalist subterranean space inside the Made Hotel. Proechel says by labeling his menu as “New American,” he can cook anything he desires without pigeonholing himself into one genre.

“I think it’s good to be broad in that sense because I’m basically taking everything that I’ve done — all of the places I’ve eaten, all of the places that I’ve worked in New York — and I want to take all of that experience, all of those influences and funnel it through my vision,” Proechel says.

That vision results in a seasonal menu that highlights familiar ingredients, prepared in unexpected ways. One standout is a mackerel dish that has four ingredients; the result is “everything I want in a bite of food,” Proechel says.

Jeremy Oertel and Natasha David, the husband and wife team behind the cocktail menus at Nitecap and Donna, head up the cocktail program at Ferris. “There’s a good, spicy mezcal drink on the menu that has fresh pressed carrot juice in it that I think is very refreshing. It’s not too off the beaten path for people. It’s not too avant-garde, experimental, but it’s really delicious and refreshing. I think it’s a cool way to start a meal or something you could sip throughout the course of a meal,” says business partner Charles Seich, who oversees the hotel’s entire food and beverage program. The hotel also includes a rooftop bar, a lobby bar and Paper, an all-day coffee shop.

Proechel and Seich’s minimalist approach to the menu is mirrored by the restaurant’s dining room, which was designed by Studio Mai and its founder, Milo Garcia. The walls of Ferris are a mix of French and American white oak, and exposed spruce beams run across the ceiling. The restaurant seats 40 people and features an open layout, with the kitchen visible from nearly every seat.

“We wanted to invite people right into the back of the house, you know, figuratively, to be part of the action. I think Milo nailed it, and really helped us accomplish that,” Seich says.