Feast for the Eye: Left Bank Comes to West Village

Despite what you may think, it is not a French restaurant. 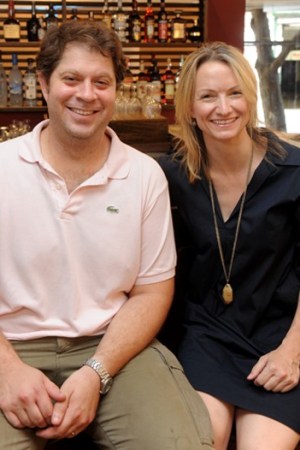 “The menu isn’t huge,” Laurence Edelman, Gaulin’s business partner and Left Bank’s chef, explains. “What we want is to do few things: appetizers, pastas, entrees, cheeses, desserts…but not to do a lot, to do a little. But to do a little as well as we possibly can.”

A sample menu offers lamb tartare with potato, anchovy and Parmesan alongside grilled local squid, skate on the bone and a “heritage chicken.” Like the menu, the space isn’t huge either. When it opens today, there will be just 55 seats, including those at the bar.

“The name is really, really important,” Gaulin continues. “We wanted something that really fit, because, you know, you’re stuck with it. And we always felt like the West Village was sort of like New York’s equivalent to Paris’ Left Bank.…It’s where all the artists, all the musicians, all the people who were a little left-of-center would hang out. Where you’d go if you were off-the-beaten-path…that was in its heyday, anyway.”

The currently bare whitewashed brick walls will soon be covered with a selection of pieces by local artists, curated by a friend who lives down the street, Gaulin explains, and there are some mounted steer horns, too.

As for the menu, it’s of “pivotal importance,” Edelman says with gravitas, “that these animals were humanely treated. It matters for your stomach, for your society, for the world, really. It’s the only thing to do.”

He’s the sort to talk eagerly about the well-loved chicken carcasses he saw that day and their happy lives.

“We’re a neighborhood restaurant,” Edelman offers when asked about the intended feel for their new corner of the West Village. “We’re hoping people come from far and wide, obviously, but we both believe that if you win the neighborhood, you’re good. And here, there’s a lot of great competition. It’s a thrill to be here with them.”